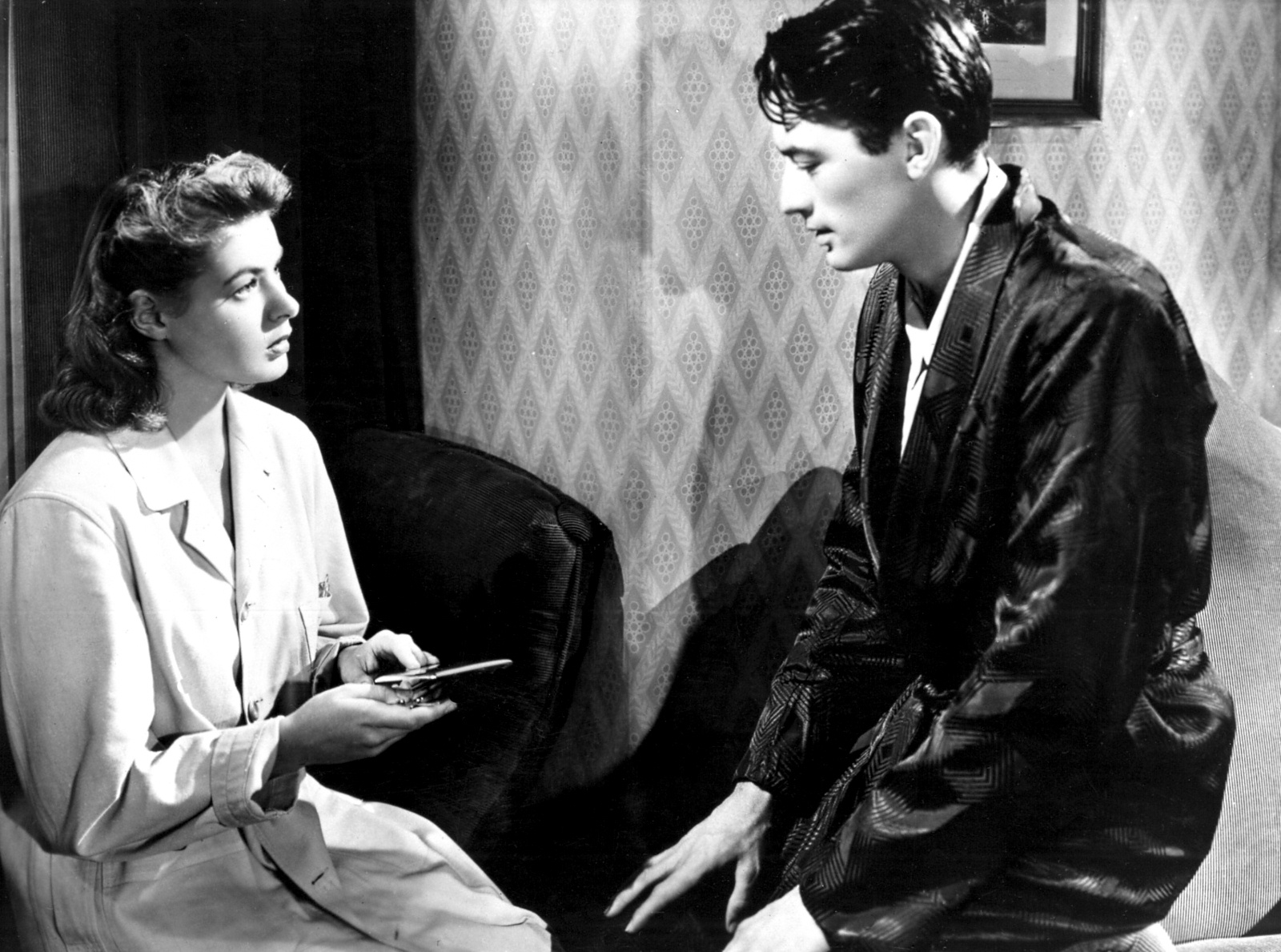 Dr. Constance Peterson (Ingrid Bergman) is one of the psychiatrists at Green Manors, a sanitarium in Vermont. She’s one of the younger psychoanalysts and the only woman, but is intensely passionate about her work (even if some of her colleagues suggest she’s too stuck up).  She’s also loyal to the director of the hospital, Dr. Murchison (Leo G. Carroll), and is disappointed to hear of his pending retirement at the top of the film. It’ll be okay, though, Murchison tells her – his replacement Dr. Anthony Edwardes is supposed to be very good. Peterson is dubious – until Dr. Edwardes shows up looking like Gregory Peck.  And then Peterson is intrigued.

But over the course of the next couple days, Edwardes starts seeming a little “off”. He seems unfamiliar with people he’s supposed to know. His handwriting in a note he’s left Peterson doesn’t match the autograph in one of his books.  And he’s also got a weird aversion to the sight of sets of parallel lines drawn on things.  And then Peterson is skeptical.

She confronts Edwardes – who confesses that she’s right, he’s not the real Edwardes.  Even worse – he believes that he’s killed the real Edwardes and taken his place.  But he’s not sure, because he’s suffering a severe case of amnesia, and the only clues to his own identity are a cigarette case with the initials “J.B.” on it and that phobia of parallel lines.  Shortly after his confession, “Edwardes” takes off, leaving Peterson a note of goodbye – and she follows, for Peterson is now in love, and determined to clear his name.

There are some ways in which this film is very much of its time.  Particularly in the bulk of the action – Freudian psychoanalysis was just getting popular, and the bulk of the film is tied up in Peterson’s analysis of “Edwardes” in an attempt to cure him – to uncover the trauma that triggered his amnesia, and the origin of his reaction to parallel lines.  The film also dabbles in dream analysis (more on that in a moment).  Simultaneously, this is also a bit of a film noir plot – while doing talk therapy and dream analysis, the couple are trying to stay one step ahead of the police, who understandably regard “Edwardes” as a suspect in the disappearance of the real Edwardes.  It’s stressful work, bringing “Edwardes” nearer and nearer a breaking point.  He very nearly turns dangerous when the couple are taking refuge in the home of Peterson’s old mentor, Dr. Brulov (Michael Chekov), and the sight of lines on the tile in the bathroom triggers a sort of fugue state in “Edwardes”, sending him down to confront Mr. Brulov with a straight razor.

Unfortunately, some of the other ways this film is of its time nagged at me a bit.  A very early scene sees one of the other psychiatrists in Peterson’s office, where he rails against her professionalism; she’s too devoted to work, he argues.  She should be more feminine; “You’re a sweet, pulsing, adorable woman,” he gushes.  “I sense it every time I come near you.”  It’s obvious he’s trying to flirt with her – especially when he flat-out kisses her.  But instead of decking him, Peterson treats this classic case of sexual harassment with an eyeroll and a laugh, sending him out with a quip that the only “pulsations” he feels are his own.  And of course, later on there’s also the little matter of Peterson getting romantically hung up on someone who might be a superior, then who might be a murderer – and then who does become her patient.  I do get that this is a drama and not a documentary, and so some procedures and protocols need to be fudged a bit for the sake of the story, but Peterson’s colleague hitting on her made me supremely uncomfortable.

On the other hand, there’s an interesting bit of gender-flipping going on.  Instead of Alfred Hitchcock’s usual pattern – having the man trying to clear his own name and dragging a pretty woman along to help him – Bergman, as Peterson, is taking the more active role, with Peck being the eye candy as “Edwardes.”  Not that this excuses Peterson’s several obvious ethics violations throughout, but this is Hollywood, not reality. It’s still nevertheless a subtle but refreshing change to have someone like Ingrid Bergman in a film and not have her face be the one the camera lingers on in soft focus all the time.

Hitchcock took another unusual step with this film – leading to the scene by which most know this film. One of the big keys to unlocking the mystery of “Edwardes” is a dream which he shares with Peterson and Brulov for their interpretation.  Hitchcock wasn’t all that impressed with the usual tropes for “dream sequences” at the time – soft-focus, with people and events that seemed just slightly different from real life.  Hitchcock wanted something that looked way more concretely grounded in its own symbolism, with imagery that seemed way more like the language of a troubled mind.  So he brought in a consultant for the dream sequence itself – Salvador Dali.  And Dali delivered.

In fact, Dali over-delivered. The original treatment Dali proposed would have been about 20 minutes in length, and a special-effects nightmare to film – one original element involved a room full of dancers in a ballroom with 15 grand pianos dangling over their heads, and another bit lead to Hitchcock having to break it to Dali that no, they would not be able to bury Ingrid Bergman in live ants.   …The sequence that made it in feels a bit too conveniently helpful, but only because of the ease with which Peterson interprets it (“you dreamed a pair of wings were chasing you down a hill? That clearly means you went to Angel Valley!”). The sequence itself is so chock-full of odd imagery that it seems obvious it would mean something.

So this was alright.  This is far from the only psychiatrist-and-patient film to blur the rules of medical practice, but the sexual politics still have me a bit grumpy.