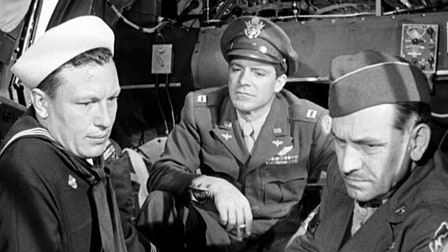 Midway through the 1940s, the world saw first the end of World War II in Europe, followed soon thereafter by the end of the war in Japan.  Thousands of United States servicemen were free to rejoin their families and lives.  And in each case, after they walked in the door and were tearfully embraced by kids or wives or girlfriends or mothers or whoever waited for them, and after a couple hours of excited storytelling and a good night’s sleep, no doubt everyone woke up asking themselves, “….okay, now what?”

The Best Years Of Our Lives follows three of those “now whats”.  Three servicemen – Sergeant Al Stephenson (Fredric March), Captain Fred Derry (Dana Andrews) and Petty Naval Officer Homer Parrish (Harold Russell) – all meet on the plane bringing them home to “Boone City”, a fictional Everytown where they all hope to go back to their old lives; Parrish has a fiancée waiting for him, Derry hopes to rejoin his wife, and Stephenson has a family and his old job at the bank.  But as excited as they are, they’re all a little uneasy as well; Stephenson’s wartime experience is causing him to have a bit of a think about his priorities, and Derry is starting to think he may have married in haste.  And as for Parrish – he’s a double amputee, with two steel hooks replacing his lost hands, and is afraid his disability will be too much of a burden for fiancée Wilma (Cathy O’Donnel). 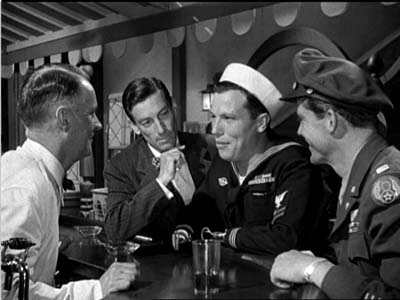 All three men flee their respective welcome-home parties to meet up at a bar owned by Parrish’s uncle Butch (Hoagy Carmichael) and do some veterans-club bonding.  Stephenson also brings his wife Milly (Myrna Loy) and daughter Peggy (Teresa Wright), who hits it off with Derry over the course of the evening.  After this night of carousing, though, everyone tries to settle back down into a normal life.

That settling-back-down, and the bumps all three face on the way, make up the rest of the movie. Stephenson is appointed vice president in charge of distribution of loans offered to returning G.I.s. But Stephenson’s altered perspective leads to some unorthodox decisions about who is deserving of a loan, causing consternation in the board rooms.  Derry has less job success – he was a soda jerk at the local drug store before the war, a position that’s not quite lucrative enough for his fashionista wife Marie (Virginia Mayo). Marie chafes at having to cut back after living on Derry’s sizeable wartime payments, and the home strife – plus bumping into Peggy again once or twice – causes Derry to rethink his marriage.  Parrish has the bumpiest transition – a physical adjustment to his new prosthetics, and an emotional one as he wrestles with the reactions of friends and strangers to his prosthetic hooks.

The plot description sounds a little hokey and Capra-esque.  But there is some really sophisticated stuff in this film, particularly in Derry’s story.  His post-war struggles seem especially current, since he’s facing the same kind of pressures that veterans face today – joining the military to flee a dead-end job, performing exemplary work in service, but then returning home and finding that the skills they learned during wartime don’t always translate to the home front. There’s an uncomfortable scene where Derry is at his old job asking about coming back to something a bit better than his previous soda jerk position. But Derry’s military service was mostly as a bombardier. “Unfortunately, we’ve no opportunities for that with Midway Drugs,” sniffs the store manager, before offering Derry a low-level retail position.  And Derry’s co-workers gossip that the only reason he even got the job is because of his service; “nobody’s job is safe with all these servicemen crowding in,” another clerk grumbles.  I was surprised to see that; the narrative I’ve grown up with is one of a much smoother post-war transition, with all of the former GIs happily sliding right back into their old lives or trotting off to college with tuition paid by the G.I. Bills.  But it wasn’t that simple.

An even bigger shock was to see the dangers of the atom bomb acknowledged, if only for a moment. Stephenson’s son is a slightly nerdy high school student who grills his father at one point about one particular aspect of his service.

“Say, you were at Hiroshima, weren’t you Dad?..did you happen to notice any of the effects of radioactivity on the people who survived the blast? […] We’ve been having lectures in atomic energy at school, and Mr. McLaughlin, he’s our physics teacher, he says that we’ve reached a point where the whole human race has either got to find a way to live together, or else […] Because when you combine atomic energy with jet propulsion and radar and guided missiles, just think…”

Growing up as I did in an era of ICBMs and Mutually Assured Destruction and the Cold War Arms race, hearing a warning against those very things from 1946 stunned me. 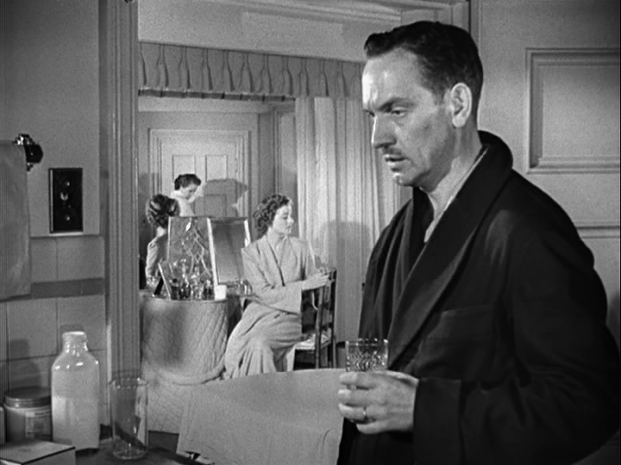 Parrish’s story is the most “pat” – the tale of a veteran learning to cope with a prosthetic is a sadly familiar one now. But it was new for 1946 – and is handled with tremendous sensitivity. A lesser movie would have shown Parrish clumsily struggling with things and having countless temper tantrums, raging against the unfairness of it all.  There are one or two instances of this – a fumble with a glass of lemonade his first day home and shouting at some peeping-tom kids trying to watch him perform some household chores. There are also a couple of moments that feel borderline “stunty”, with Parrish lighting a cigarette or playing “Chopsticks” on Uncle Butch’s piano. But Parrish’s story wisely downplays his physical condition, focusing more on his relationship with Wilma.  For most of the film Parrish is afraid his changed circumstances would be too much of a burden for Wilma, and he begins treating her coldly, hoping she breaks their engagement and moves on.

But a determined Wilma just doubles down on her devotion, leading to one of the film’s most poignant scenes; Wilma turns up at the house while Parrish is getting a midnight snack, begging him to open back up to her.  So Parrish decides to show Wilma what she’d be in for, and invites her to come watch him get ready for bed.  And in a surprisingly intimate sequence, Parrish matter-of-factly shrugs off first his robe, and then his prosthetic hands, which are fastened onto his body by a shoulder harness.  “I’ve learned how to wriggle into this,” he matter-of-factly tells Wilma, shrugging on his pajama top.  “It’s a good thing I still have elbows.  …I just can’t do up the buttons,” he concludes, turning to her.  After a beat, Wilma calmly reaches out and buttons his pajama top for him, then helps him into bed before kissing him a fond goodnight and slipping out, leaving Parrish lost in contemplation.

Harold Russell, who plays Parrish, gives an especially impressive performance when you learn that he wasn’t even a professional actor.  Russell had been a grocery clerk in Massachusetts before the war and lost his hands in a combat training incident. The prosthetic hooks were his own, and he became adept enough with them that he was featured in a military short-subject documentary about rehabilitating injured vets. The Best Years director William Wyler happened to see the documentary and offered Russell a role. At the 1947 Oscars, the Academy presented Russell with a special honorary Oscar statuette “for bringing hope and courage to his fellow veterans”, at the behest of the Academy Board of Governors who wanted to make sure Russell got something. But they needn’t have worried – Russell was also presented with the Best Supporting Actor Oscar that year, the only time in which anyone has won two Oscars for the same performance.

The film wraps up all three stories with suitably happy endings, but the journeys each took to get there were sensitively handled and presented all the nuances honestly enough that the happy endings felt sincere instead of hokey.