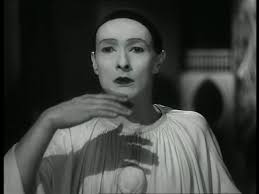 Now that’s how you make a movie about a courtesan.

Like Camile, Children of Paradise deals with a courtesan in mid-1800’s Paris. But unlike Camile, it presents a much more realistic approach – acknowledging the economic realities that drove our heroine into that life and addressing the thorny emotional complications.  Although, in this case, the film deals more with the Parisian theater scene; our heroine Garance (who goes by a mononym, as does the actress Arietty playing her) is simply a little more open to favors from her admirers.

Garance is more of a sideshow performer; barkers lure rubes in by claiming they’ll see the naked Garance, only for the rubes to find that she’s sitting neck-deep in a tub of colored water.  Still, it’s a living, and Garance is pretty enough for the rubes to leave without feeling too disappointed.  She’s also pretty enough to catch the eye of Frédérick Lemaître (Pierre Brasseur), an aspiring actor who passes her on the street one day.  He immediately tries hitting on her, but she’s on her way to meet up with another admirer, Pierre-François Lacenaire (Marcel Herrand).  Lacenaire is a scribe, but it’s a front for a small crime ring, with Lacenaire’s pickpockets mingling in the crowds outside and bringing Lacenaire the spoils.

One of Lacenaire’s men actually gets Garance into trouble one day – she’s watching a street show outside one of Paris’ theaters, and a bystander in the crowd gets his pocket picked and blames her. But luckily, one of the performers – a mime named Baptiste (Jean-Louis Barrault) – has seen the whole thing, and gives his wordless witness statement. Surprisingly, it works. It also turns out to be Baptiste’s big break; he’s a bit player at Paris’ “Funambles” Theater, but his unexpected mime convinces his manager that Baptiste may be an undiscovered talent.  Baptiste is of course pleased by the new attention – but is also haunted by the memory of Garance (a condition his existing girlfriend is none too happy with). 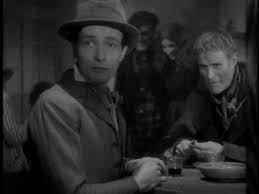 He finally bumps into her again at a local dive bar – she’s come with Lacenaire, but he’s acting like a jerk and Baptiste makes his move, the pair leaving for Baptiste’s boarding house. While they’re pitching woo, however, Baptiste realizes that she’s treating the whole thing like a hookup; he won’t settle for anything less than love, and he stalks out.  But – conveniently, Lemaître is in the room next door, and he’s a lot less fussy.

Lemaître is there, actually, thanks to Baptiste, who’s taken the aspiring actor under his wing a bit; getting Lemaître both a spot in the boarding house and a job at the Funambles, as a supporting player in Baptiste’s new mime sketches. Lemaître would actually rather be playing Othello, but work is work. Baptiste makes Garance the same offer, and she accepts, appearing with Lemaître alongside Baptiste and then fooling around with Lemaître off hours.  Baptiste knows everything, and is increasingly glum. Then the wealthy Count Édouard de Montray attends the show and stops backstage to ask Garance to be his mistress. She turns him down at first, but he says she can always come find him if she changes her mind. Soon after, Lacenaire tries to murder another man in the boarding house and Garance is brought in as a suspect; knowing it’s her only way out, a desperate Garance asks de Montray for help, agreeing to whatever he wants. Turns out that what he wants is to leave Paris, and he takes Garance with him. 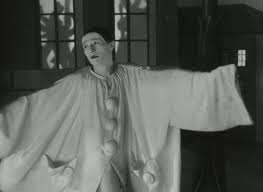 Some several years later, Lemaître is a star member of the ensemble at Paris’ Grand Theater, and has managed to finally convince the producers to give him a shot at Othello. He and Lacenaire are chums, after an attempt Lacenaire makes to rob him takes an unexpected turn. And Baptiste is still at the Funambles, where he’s a top box-office draw with his original mime pieces.  Baptiste is also married and a father, but has never forgotten about Garance.  And then a mysterious and well-to-do woman starts coming to see Baptiste every night, reserving a box seat all to herself and wearing a veil. Lemaître hears about the woman and is determined to find out who she is… 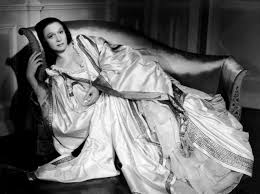 In his own review, Roger Ebert said that “all discussions of Children of Paradise begin with the miracle of its making”; maybe I didn’t begin with it, but it certainly bears mentioning. The whole thing was shot while France was under Nazi occupation, and two members of the production staff – its art director and its composer – were Jewish, and had to work in hiding. Half the cast were covert French Resistance members, but the other half were Nazi sympathizers who the director had to hire to appease the Nazis (and amazingly never knew their colleagues were in the Resistance).  Other extras were so hungry that during a banquet scene, the extras made off with all the food the second filming wrapped for the scene. The film stock was under rationing and had to be parceled out. There wasn’t enough money or resources to build sets in both shooting locations, so they had to move the sets from Paris to Nice depending on where they were that week; even worse, a spate of bad weather in Nice damaged some of the sets.

None of that hardship is evident on screen.  Instead, we see a vibrant, rich world, full of lavish costumes and mansions and ornate theater boxes and shabby little dive bars, with crowds and crowds of people in the streets and in the theaters, and a leading ensemble of five vividly real characters. Perhaps the screenwriters were assisted by reality – all four of the men in love with Garance are based on actual people, and in the case of Baptiste and Lemaître they were even given their names.   Jean-Louis “Baptiste” Barrault actually pitched the director the idea for a film about Baptiste and Lemaître, but the director and screenwriter were reportedly not that into mimes and added to the story some.

It’s still a superb work. Even without the additional hurdles of “filming during war” it would be a superb work – a rich story, a stunning attention to detail, and some gorgeously composed shots (there’s a scene towards the end of Baptiste trying to chase someone through a crowd; but it’s a carnival scene of Baptiste fans, with all of them cosplaying as his Pierrot character, and he gradually gets drowned in the hundreds of doubles). Incidentally, the “Paradise” of the title refers to the highest-up seats in French theaters of the time – the cheapest seats in the house, usually occupied by the poorer theatergoers, all of whom were less reserved in their reactions to a play. Baptiste mentions that he prefers playing for these “Children of paradise” and that the mimes he creates are for them. “They understand, though they are poor. I’m like them. […] Their lives are small, but their dreams are vast.”