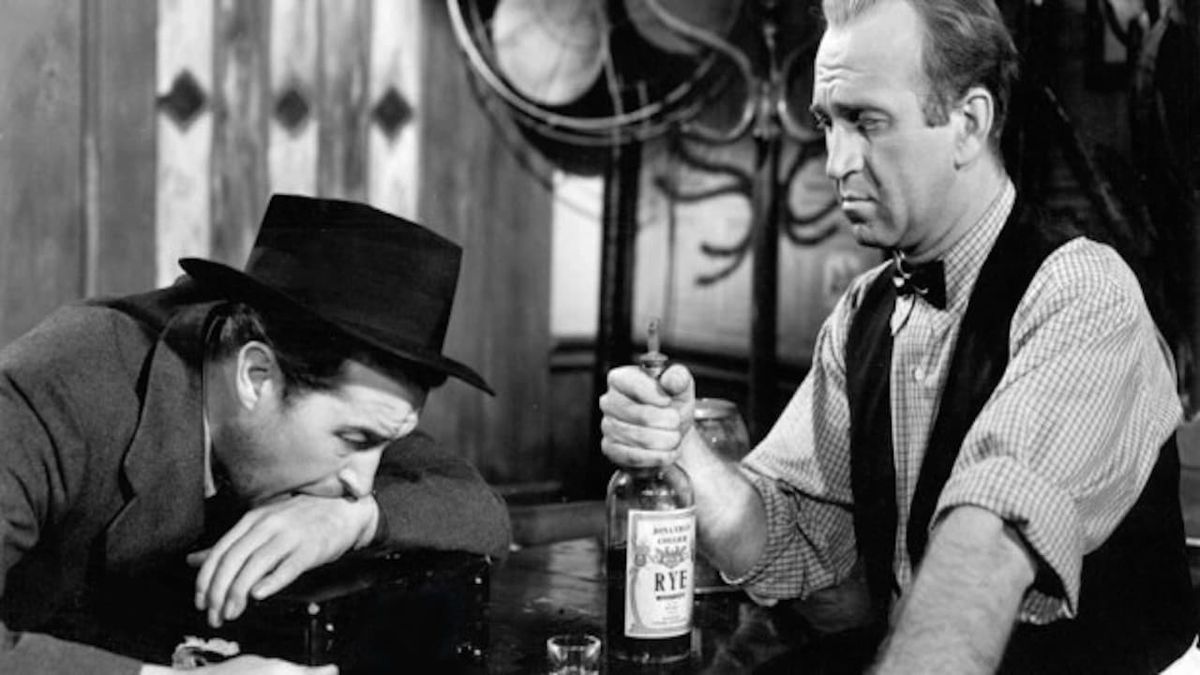 Like with The Wolf Man, I think my reaction to this film has been colored by seeking some of its tropes copied by lesser films first.  Instead of B-movie horror films, though, this film reminded me of all of those painfully earnest anti-drug or anti-drinking messages I had to sit through in Junior High or on the ABC After School Special.

It’s got that kind of plot, for a start. Don Birnam (Ray Milland) is a would-be writer and heavy alcoholic living with his brother Wick, who has been struggling to keep Don dry. The start of the film sees them both packing for a weekend visit back to their parents in the hopes that a lengthy rest will do Don good (also it will give Wick a bit of a break). But Don slips out from under Wick’s watch, and a frustrated Wick leaves without him – he’s taken all of Don’s money, he figures, and also confiscated all the booze in the house, so Don will just end up being bored.  But Don gets his hands on some cash and buoyantly sets out on a weekend-long binge. 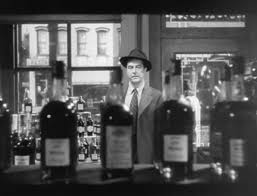 That binge, and Don’s craze to keep it going, is the bulk of the plot. Don swings perpetually between high-flying drunkenness – stumbling through the streets, spouting off grand pronouncements in a bar, collapsing in a dirty heap in the apartment – and a monomaniacal craving for alcohol, sending him to beg from old girlfriends, destroy Wick’s apartment on a search for one possible last bottle, or steal from strangers.  One lengthy sequence sees Don lugging his beloved typewriter about 20 city blocks in the hunt for an open pawn shop, hoping to sell it for another bottle.

So, typically, when I watch one of these movies, I go into it as blind as possible, waiting until after watching to read any critical opinions or reviews.  I try to form what is as close to my own gut reaction as I can.  So my own take can sometimes differ wildly from the critical response to a film.  With The Lost Weekend that difference was especially big; critics rave about Milland’s performance, and how it is brutally honest, and how the whole film is a hard-hitting depiction of “the truth about the horrors of alcoholism.”  But for me, Milland seemed painfully overwrought; perpetually mopping his brow and glaring at the world with a crazed eye when “sober”, staggering and girning and slurring speech when “drunk”.  But if that’s not bad enough, the script gives him some awfully corny things to say, like in this comment he makes to a bartender:

“It shrinks my liver, doesn’t it, Nat? It pickles my kidneys, yeah. But what it does it do to the mind? It tosses the sandbags overboard so the balloon can soar. Suddenly I’m above the ordinary. […] I’m one of the great ones. I’m Michaelangelo, molding the beard of Moses. I’m Van Gogh painting pure sunlight. I’m Horowitz, playing the Emperor Concerto. I’m John Barrymore before the movies got him by the throat. I’m Jesse James and his two brothers, all three of them. I’m W. Shakespeare. And out there it’s not Third Avenue any longer, it’s the Nile, Nat! The Nile and down into the barge of Cleopatra!”

Despite this, there were some shots that caught my eye and reassured me that director Billy Wilder knew what he was doing. There’s one sequence when a hung-over Don is hunting for a bottle of whiskey he knew he’d bought the day before, and hid for “safekeeping”. But now he needs it, and is too fuzzy-headed to remember where he hid it – inside the ceiling light fixture.  As he’s tearing the living room apart, there’s a long shot capturing Don’s face as he hunts for the bottle on the floor – and the light fixture hovering right over him, just over his shoulder. I actually had to fight the impulse to call out “turn around, will you!” at the screen.  There’s also a lengthy flashback sequence with Don at an opera – the onstage scene is set at a party, and as the scene plays out, the camera gradually draws in more and more on the drinks each character holds in their hands, the waiters passing glasses of champagne, the footmen standing by with more bottles, the performers toasting and sipping…

There’s also a creepy sequence after Don ends up in the drunk tank at a hospital, where an orderly tries to scare him straight by warning him of the kind of hallucinations some drunks can see.  Don flees the hospital anyway – only to later see himself being plagued by bats in his living room.

Taken as a whole, though, the film read as overearnest.  But I’m also coming to this after seeing (or being subjected to) countless lesser films about The Perils Of Drink. When The Lost Weekend originally came out, drunkenness was treated as a joke – W. C. Fields’ characters were just as perpetually in search of a drink as Don, but there it’s something to laugh at. The Lost Weekend was the first film to take alcoholism at all seriously, which must have been galvanizing for audiences.  I’ve just happened to come along at the tail end of the sea change that this film started.