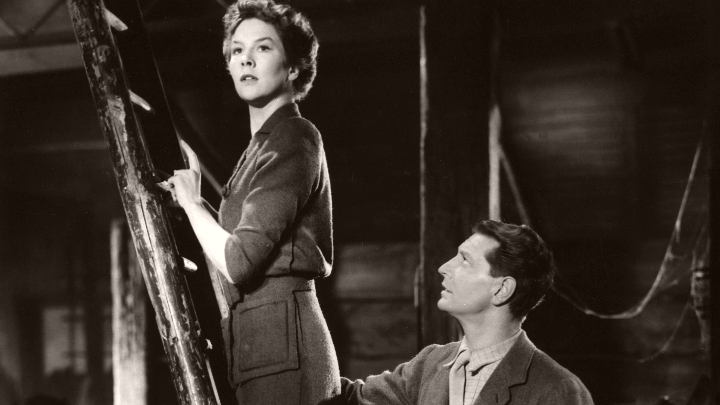 It’s been interesting watching all these movies at a fast clip; it’s like I can chart the mood of the World War II British home front just by watching the movies, seeing things go from the nostalgia for peacetime with How Green Was My Valley to the determination of Mrs. Miniver, to the rallying-cries of Fires Were Started and Henry V.   And now we’ve come to 1945’s I Know Where I’m Going!, where the attitude seems to be “pfft, the war’s nearly over, let’s have some fun again.”

There is precisely one passing mention of the war, when headstrong Joan Webster (Wendy Hiller) is preparing to set out for Scotland at the film’s rise; but it’s buried in the middle of the long list of reasons why Joan is telling her father that she’s going off to marry the head of a chemical factory.  But Scotland’s distance from potential bombardment is clearly secondary to her fiance’s wealth, the novelty of the Highlands, and the grand adventure of it all.  Joan’s always been the kind of person who goes after exactly what she wants, and lets nothing stand in her way.

Even though her fiance has made all the travel arrangements, Joan is still eager and excited to get herself onto the train up to Glasgow, switched onto a smaller train to the Highlands, and then onto a ferry to the Isle of Mull where she will presumably then wait for one final charter boat to take her across the bay to Kiloran, the tiny private island where her fiance is waiting.  But when she finally gets to Mull, a gale has blown up, and no captains are willing to make the passage in either direction.

Fortunately Joan bumps into Torquil MacNeil (Roger Livesey), an RAF officer also hoping to reach Kiloran to spend his one weeks’ leave there. MacNeil grew up on both Kiloran and Mull, and invites Joan to crash with him at one of his friend’s houses while they wait out the gale; Joan will be able to get a comfortable night’s sleep and they can try again in the morning.  The weather’s not any better the next day, so Joan and MacNeil are forced to stay in Mull an extra day.  And then another.  And then still another. MacNeil tries showing Joan around some while they wait, and Joan is fascinated by the more rustic way of life – but not as fascinated, she realizes, as she’s becoming with the handsome MacNeil.  She’d better get herself to Kiloran somehow, she realizes, before it’s too late…

Okay, I’m not even going to comment – much – on the love story part of the plot because I suspect that you all can guess precisely what happens.  I’m a big ol’ cynic, anyway, so I’m going to have little different to say about it so let’s just assume I said my usual “been there seen that” and move on.

The part that really caught my eye, instead, was how the movie handled life in Mull.  It’s presented as foreign to Joan, but not in an exotic, gawking way – it’s refreshingly matter-of-fact about the culture of Mull, introducing us to both longtime locals and the newcomer rich English folk, and it’s the latter group that comes across as the weird ones.  There’s a scene where Joan and MacNeil are hitching a ride on a local bus around Mull, and MacNeil starts chatting with a group of men who recognize him – and they start trash-talking Joan’s fiance unawares, talking about the odd habits of the Englishman who’s moved onto Kiloran.  “He’s building a swimming pool out there and importing salmon!” the men scoff.  “Why not swim in the sea and catch his own salmon?” 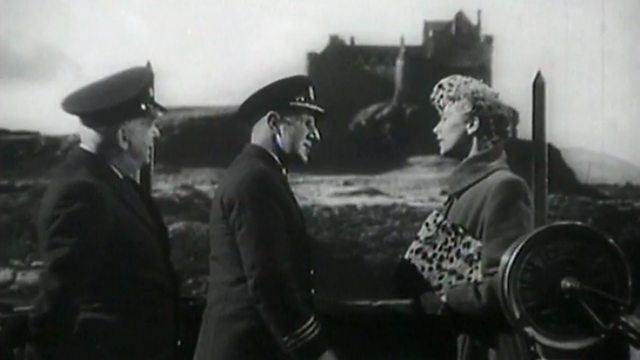 And in an earlier scene by the pier, while trying to snag her initial ride to Kiloran, Joan overhears a couple of men speaking Scottish Gaelic to each other.  “Oh!” she interrupts them in fascination.  “Are you speaking Gaelic?”  The men just look her up and down and ask “….what else?” and go back to their conversation.  In Gaelic again, of course.

That take on Joan’s culture clash is what impressed me more.  The filmmakers could have easily made the Highlander Scots culture a subject of fun – the locals MacNeil meets on the bus could have all been complete rustic yokels, and there could have been one character who spoke with such a heavy burr that he was nigh-incomprehensible.  Instead,  the buffoons in the cast are all English; an upper-crust couple Joan’s fiance knows that invite her to lunch and are impossibly snooty, and there’s a bumbling hunter who’s determined to teach himself falconry but loses control of his flock.

Meanwhile the Scots come across as practical and sensible, from the captains on the pier to the locals on the bus.  The friend with whom Joan and MacNeil lodge is also a formidable character – a local gentlewoman named Catriona who makes her entrance accompanied by three hunting hounds and heartily welcomes Joan to say with her, gushing that “I haven’t heard any decent female nonsense for months!”  (…I’d love to have seen way more of Catriona, to be perfectly honest.)  Even an evening at a local dance avoids the Brigadoon treatment I thought I’d be seeing, and presents it as exactly what it is – a house party to celebrate an elderly couple’s anniversary, and they just happen to be celebrating with pipers and folk singing the way everyone has a party there on Mull. 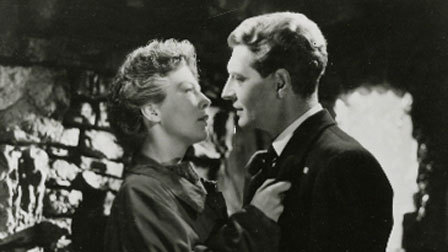 By the end of the movie, Joan has fallen in love – of course – but it’s hard to not fall a bit in love yourself with the Isle of Mull and the Hebrides in general, thanks to the refreshingly genuine take the movie has on that community.