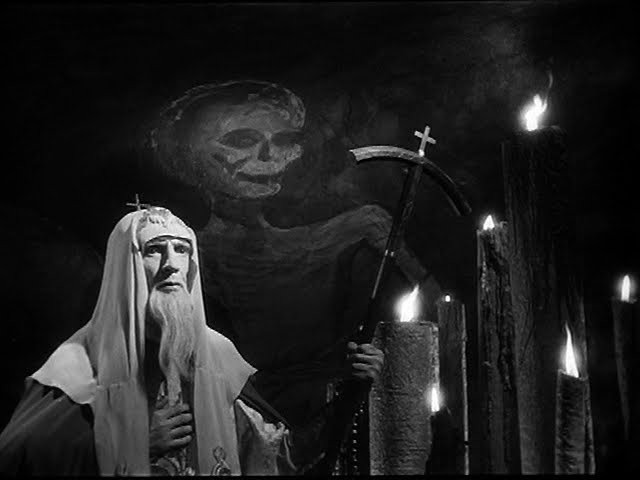 Instead of covering multiple events in Ivan IV’s life, we cover only one with this film – his discovery of a plot to overthrow him and his overcoming that plot.

Part 2 follows so closely on the heels of Part 1 that I wondered why Eisenstein didn’t just combine the two films.  Part 1 presents Ivan’s aunt Efrosinia scheming to overthrow him and crown her own son Vladimir as tsar; she sets things in motion by sneaking a poisoned cup of wine into the tsarina’s chamber, killing her.  It isn’t until Part 2 that she goes onto the next step of actually killing off Ivan.  But Ivan figures things out in advance and schemes how to turn the tables on her.

While I did verify some of the other minor incidents from the film – Ivan’s feud with a Moscow bishop, the defection to Poland of his buddy Kurbsky – I can’t definitively find proof that there was an assassination plot against him, much less that his aunt was part of it.  It’s almost not necessary – this is a palace-intrigue plot straight out of Game of Thrones.  In fact – if you switched the actual Game of Thrones plot up so that it was Cersei who tried to poison Joffrey at the Purple Wedding in a bid to clear the way for Prince Tommen to take over, but Joffrey found out and had Tommen killed instead, you basically have the plot for Ivan The Terrible Part 2.

You don’t have HBO’s budget, though, and you have Sergei Eisenstein at the helm.  So you’d still have a lot of shots of Lena Headley looking out windows and sipping from a wine glass, but then you’d have Dean-Charles Chapman doing nothing but sitting at her feet and playing with Ser Pounce and then you’d have a lot of shots of Jack Gleeson doing nothing but staring pensively at the floor in the map room, plus a lot of shots of wine being poured out of caskets and spilled in dim light so it looks like blood, and maybe with Hot Pie and Arya as little kids cowering in the shadows and watching with wide and frightened eyes.

…That metaphor got away from me a bit. 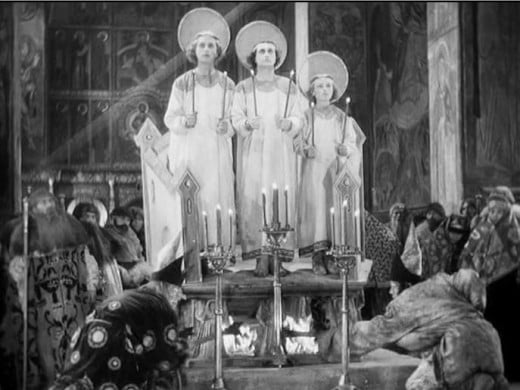 This was the chapter of Eisenstein’s trilogy that Josef Stalin famously panned; my hunch is that it’s because Ivan has some major moments of self-doubt in here, followed by moments where he decides that well, if his lords are going to try killing him, he’ll just beat them to the punch.  If they think he’s so terrible, he’ll show ’em terrible.  There’s a pretty on-the-nose sequence where a group of nobles is attending a miracle play at a church service, depicting the story of Shadrach, Meshach, and Abednego,  and a young child in the audience asks what the story is about. His father says it’s the story of “how three men escaped from being killed by an evil tsar”.  And sure enough, when Ivan turns up midway through the play, the child points at him and says “Papa, look, it’s the evil tsar!”  ….Gee, guess what that might mean.

Not only did Ivan look bad metaphorically with this installment, he also looked bad visually.  The eye-catching shots that drew me in last time are gone; there’s a really odd switch to color midway through, during a dance sequence at a banquet.  Otherwise instead of novel, all the montagey shots seem trite and obvious, and that on top of Ivan going evil makes this not a good look for him overall.