I have to confess: since I grew up in the 1980s, the very first I was aware of Joan Crawford was through the movie adaptation of her daughter’s memoir Mommie Dearest.  So my mental image of Joan Crawford will forever in part be associated with Faye Dunaway shrieking “No wire hangers!”  Which I admit is unfair.  Fortunately, though, her performance in Mildred Pierce did much to overcome that impression and remind me that she was also an actress of some renown before that happened.

Mildred Pierce itself had a pretty soap-y plot.  It opens with a man being shot to death; we don’t see the shooter.  However, we do see Mildred luring another man, former business partner Wally Fay (Jack Carson), into the house and trying to frame him for it.  However, the police manage to catch both Mildred and Fay fleeing the house, and bring everyone down to the station.  But to Mildred’s surprise, after making her wait for an hour or so, the police say they’re letting her go – they have their killer, they say. The victim was her current husband, and the man with the clearest motive was her first husband, Bert (Bruce Bennet).  QED.  Mildred refuses to believe them; he’s not like that, she argues.  “What makes you say that?” the officer asks her.  And Mildred begins her story…. And thus the rest of the film is a flashback over the past few years of Mildred’s life, starting with the breakup of her marriage to Bert and her struggles as a single mother to two daughters, social-climber Veda (Ann Blyth) and tomboy Kay (Jo Ann Marlowe).  Mildred’s already had a cottage industry as a baker for the other women in the neighborhood, and adds on a job as a waitress to give herself a crash course in the restaurant business.  She’s soon successful enough to take the plunge and open up her own place, buying an old building from debt-ridden society playboy Monty Beragon (Zachary Scott).  “Mildred’s Fine Foods” quickly becomes a chain, impressing Beragon enough to woo Mildred herself. 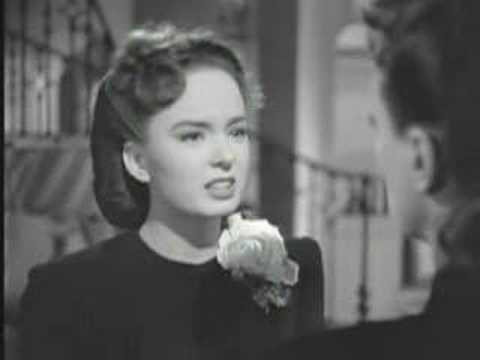 The only person unimpressed with Mildred’s success is Veda, who finds the whole idea of her mother actually working to be, like, totally embarrassing.  She’d much rather go out on the town and have fun – like Beragon does.  And soon both Veda and Beragon are spending their way through Mildred’s money; Beragon buying custom-tailored suits and golf clubs, and Veda buying dresses and hitting up night clubs.  And occasionally….Veda and Beragon hit up the clubs together.

Monty Beragon is the murder victim at the start of the film, and the story goes through some more twists and turns before we find out who killed him.  And yeah, they’re pretty soapy.  However – even though there was a plot twist that I did see coming from a distance, I was kept guessing as to “who killed Monty” up to the very end.

And, again, I was also pleasantly surprised at Joan Crawford in this film.  This is not the camp Crawford that I saw spoofed in Mommie Dearest, this was an actress giving a superbly human performance in the middle of a melodrama of a plot.  This is a role that won Joan Crawford an Oscar for Best Actress, and I have to say I can see why.