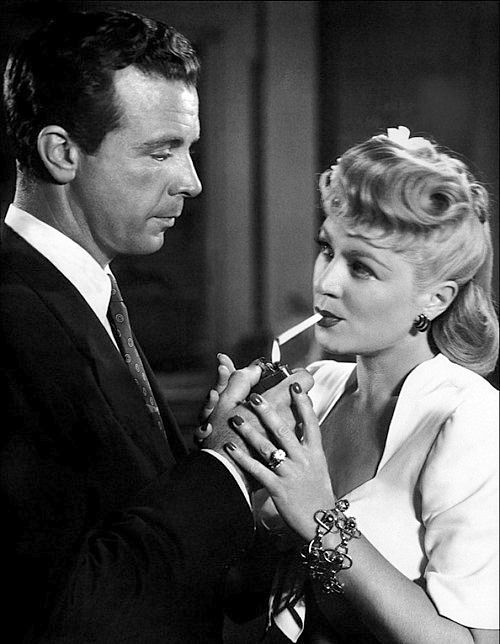 1944 is shaping up to be The Year Of The Detective Film Noir.  My crash course continues with this film, an adaptation of Raymond Chandler’s Farewell, My Lovely, with Dick Powell starring as Chandler’s anti-hero detective Philip Marlowe.   Things start off simply enough, with Marlowe getting a late-night visit from “Moose” Malloy (Mike Mazurki), a big lummox of a guy who just got out of an eight-year prison stint and wants Marlowe to help track down his old girlfriend Velma.  She was a chorus girl at a local bar, but the bar’s changed hands recently and no one knows where Velma is.  It seems the trail’s run cold, but Malloy is insistent enough – and Marlowe broke enough – that Marlowe agrees to keep on the case, thinking that he can simply mark time until something better comes along.

And the next day something does – another straightforward-sounding gig as the bodyguard for a Mr. Marriott (Douglas Walton), the representative of a socialite who’s sent Marriott to pay the ransom for one of her stolen necklaces. Marriott is meeting the thieves in a canyon outside Los Angeles, and offers Marlowe $100 simply to keep him safe. Easy money for easy work.  …Except Marlowe gets knocked out when they arrive – and when he comes to, he finds Marriott has been brutally beaten to death.  Even more puzzling, when Marlowe reports the murder to the police, they ask him out of nowhere if he’s ever heard of a man named “Jules Amthor”.  “….No, who’s that?” Marlowe asks.  But instead of answering, the police warn him to stay away from Marriott’s murder case.

Except when he gets to his office he finds a young woman, Ann, waiting there (Anne Shirley); she’s the stepdaughter of the woman who owned the necklace. Ann brings Marlowe to her parents’ house; her stepmother Helen (Clare Trevor) wants to hire him to find the necklace.  Ann briefly and secretly tries to bribe him into refusing the case.  But then Helen’s next visitor shows up – Jules Amthor.  Marlowe is hurried out the door before he can say anything.  But then gets his chance to meet Amthor when he is brought to Amthor’s apartment – by Moose Malloy, Amthor’s hired hand.  Amthor is a psychic, and Helen one of his frequent clients; but Marlowe guesses that Amthor somehow thinks Marlowe has the necklace in question.  But before he can act on it, Malloy knocks him out and brings him to….

To be perfectly honest, when I got to this point of the movie I was finding I really, really didn’t care about it any more. 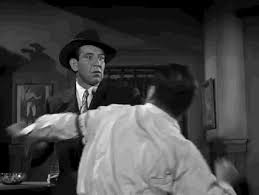 This isn’t really the fault of any of the actors.  Dick Powell was okay as Philip Marlowe; although the role was a serious departure for him, as you may recall from his previous appearance as a Busby Berkeley regular in 42nd Street and Gold Diggers of 1933.  Powell feared he was getting typecast as the song-and-dance romantic lead, and lobbied hard for the role of Marlowe (kind of the flip side of Jimmy Cagney trying to move from gangster films to musical theater).

And, sure, he does fine. But I was finding that I simply didn’t like Marlowe himself very much, and it’s hard to care what happens to a character you actively dislike. Especially a plot this complicated; it felt like every scene was pulling Marlowe into another meeting with yet another character adding yet another layer of complexity to the plot, oftentimes with Marlowe getting hit or punched or tripped or drugged or shot or otherwise suffering from some other physical indignity, to the point that I wondered why Marlowe didn’t simply throw up his hands and tap out to save himself.  It was bound to leave fewer bruises that way, at least. 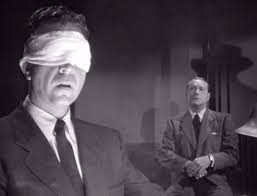 The screenwriter also set the script up so that the whole story was a flashback, with Marlowe relating his tale to the sergeant at a police station where he’s been brought in for questioning.  Screenwriter John Paxton pulled that trick so he could preserve some of the first-person narration from Chandler’s novel; but it was an element that I tired of quickly, especially since Paxton and/or Chandler uses the very same expression to describe Marlowe passing out (something about a black pool opening at his feet and him diving in) on three separate occasions in the film.

I’m afraid I wasn’t very impressed. I know and respect that Raymond Chandler is a titan in the crime-novel world, and that Philip Marlowe is one of his biggest characters, but…I have never been an enormous fan of the mystery genre for the most part, and to be honest, it’s because of things like this film.