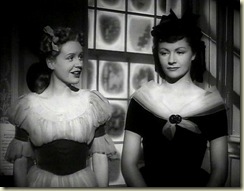 Despite the title The Man in Grey, this film is more so about the rivalry between a pair of women.

Pretty Clarissa (Phyllis Calvert) is the star pupil and most popular girl at Miss Patchett’s, a finishing school for society girls in Regency England.  We meet her on the day she meets Hester (Margaret Lockwood), the daughter of a formerly-wealthy family fallen on hard times; Miss Patchett has agreed to take Hester on as an assistant teacher, and the proud Hester, embarrassed to have to accept charity, is on the defensive.  But Clarissa’s genuine good nature compels her to befriend Hester.  Hester never fully lets her guard down, but one night – the night before she sneaks off to elope with a soldier – she gives Clarissa her sewing kit, as a gesture of thanks.  When Hester’s escape is discovered the next morning, and Miss Patchett declares Hester a Person Who Must Not Be Named, Clarissa is so indignant she leaves the school herself, out of loyalty. 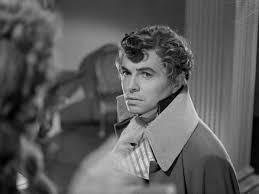 Clarissa’s impulse puts her in a precarious position; she has no real family and is under the care of a godmother in London, who’s not in the best financial position. Her godmother embarks on an all-out effort to marry Clarissa off, dragging her to a series of society events and balls – including one held by the Lady Rohan, who’s seeking a match for her ne’er-do-well son, the Lord Rohan (James Mason).  Lord Rohan is a gambler and a rake, and is such a misanthrope that we never learn his real name – everyone only calls him “The Man in Grey” after the grey suitcoat he always wears. Clarissa and Lord Rohan aren’t all that impressed with each other, but Rohan’s mother wants an heir for the house, and Clarissa’s godmother wants to see her taken care of, so the pair are persuaded into a loveless marriage, with each living largely independent lives.  Even after Clarissa finally has a son, Lord Rohan takes the boy to live with him on their country estate and leaves Clarissa to herself in London.

One night, after about five years of this half-life, Clarissa learns that Hester is now an actress, appearing in a play in a town just north of London. She rushes to reunite with her old friend, meeting her backstage at one of the performances and inviting her to supper.  She turns the head of one of the other actors, a down-on-his-luck landowner named Rokeby (Stewart Granger), but initially snubs him to focus on Hester.  Hester’s not had the best time of things since their school days – so when Clarissa offers a job, Hester jumps at the chance.  ….And when Hester sees the state of the Rohan’s marriage, she gets another idea, particularly when Rohan starts hitting on her.  And then when Rokeby turns up in London, making googly eyes at Clarissa, she sees her chance…

In other words, it’s a Regency England romance novel melodrama, which is precisely the kind of story which I usually find boring – all highly-regimented manners and social schemes and people’s entire social standing threatened by simply speaking to the wrong person at a party or something equally as pointless.  There’s a little more meat to this story, and a much more clear villain in Hester – after she begins an affair with Rohan, she all but throws Clarissa at Rokesby in an attempt to get her out of the way.  The story also moved at a brisk enough pace in this instance to hold my interest, and the right people at least tried to do the right things, and some of the truly treacherous characters get their comeuppances.  Even Clarissa, who seems blitheringly naïve at the start, seems to have a little bit more spunk than the usual Regency romance heroine that I’ve seen.

The film also throws in a clever little hook to sustain the interest of people like me; a framing story set in the then-present-day 1940s at an auction of the Rohan estate. A young woman – heir to the Rohan estate – is auctioning off the family treasures, and strikes up a conversation with an RAF officer who says his family always claimed some connection to the Rohans. At some point they examine a random collection of keepsakes up for auction and speculate as to their significance – a program from a play, a sewing kit, a child’s toy, and other odds and ends. During the flashback, the film takes pains to give each of these various trinkets their cameo, unspooling the story of Clarissa and Hester as they go.

…It was alright, I suppose.  Not the first choice I’d make for a movie, but not a trial either.