You’ll notice I haven’t had the best track record with avant-garde experimental film.  The only way I could make sense of L’Age D’or was to compare it to Monty Python; Limite I had no idea what was going on, and Un Chien Andalou sent me into full-on body horror.  So I approached Meshes Of The Afternoon with some trepidation.

Perhaps it’s because it feels more like a hyper-extended dream sequence.  I’ve always been fascinated by dreams – there’s a joke that implies that someone else telling you about a dream they had at length would be tedious, but I’d actually be fascinated, and might happily volunteer to pitch in and help you speculate about what it might “mean” (or laugh with you if you conclude it was triggered by something you ate). 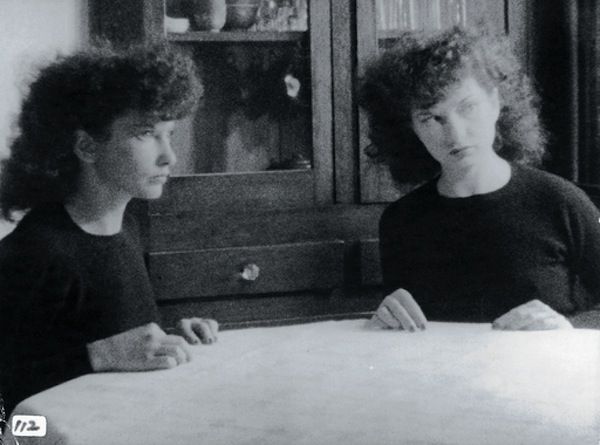 There is a lot of that funky dream-logic going on.  Things loop back on themselves again and again, random objects take on unexplained significance, or spontaneously disappear and reappear, or move around the room.  The bread knife turns into a house key.  One of the multiple Mayas in the room suddenly sees she has ink or blood on her hands.  A mysterious figure in a cloak with a mirror for a face wanders up and down the street, and eventually into the house, over and over again.  A handsome man enters the cottage towards the end, but treads the same path as the mirror-faced figure.

The other experimental works I’ve seen haven’t grabbed me the way this one has – perhaps this had just the right level of implied import to trigger my “come on, that’s got to mean something” Jungian-analysis button.  It’s also tantalizingly short, leaving you thinking that maybe if there were just one more scene you’d get the key that unlocked it all.  But no, this is all there is.

This film established Maya and her then-husband Alexander Hammid as innovators in avant-garde filmmaking (he held the camera and he’s the man who enters the house).  Her style in this film particularly has influenced a couple of David Lynch’s films, and in more recent years some of the images have left their stamp on music videos (this is where Janelle Monae got the idea for the mirror-faced figures in the video for “Tightrope” in particular).