This film really snuck up on me and gave me a sucker punch.

The whole thing is set in an around a small town in Nevada in the 1880s. The very beginning is really trope-y – Gil Carter (Henry Fonda) and his buddy Art Croft (Harry Morgan) are a pair of drifters who are making one of their periodic stops in Bridger’s Well, a Podunk of a town where the saloonkeeper advises them that all there is to do in town is “eat, sleep, drink, play poker or fight”.   Gil and Art opt for option 3, but Gil is antsy after hearing about an ex-girlfriend who’s left town and quickly adds on option 5, picking a fight with another bar patron and forcing the saloonkeeper to knock him out with a whiskey bottle.  When Gil comes around (thanks to Art throwing a bucket of water in his face), he just shrugs and goes back to drinking.

This was the point where I rolled my eyes a little and paused to make dinner, remarking to Alex as I did that “so far it seems like it’s just checking off a list of ‘things that need to happen in a Western’.”  But when I went on, dinner in hand, I realized that that was all just setup for the real story, something that affected me so much I went back to Alex after and said “I take back everything I said.” 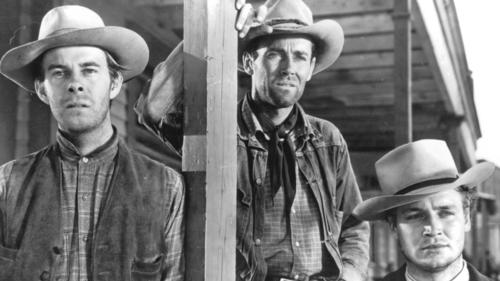 The real story kicks off when a ranch hand from the Kincaid property outside town rides in sounding an alarm – several head of the Kincaid’s cattle have been rustled, and someone was found shot dead on the Kincaid property.  Not sure who – their face was too badly damaged – but Kincaid isn’t around, so it’s probably him.  Most of the patrons in the bar quickly tumble out to fetch their horses and form a posse, with “Major” Tetley (Frank Conroy), a wealthy self-styled veteran, spurring the posse on.  Major Tetley drags his son Gerald (William Eythe) into the fray as well to “make a man out of him”.  Gil and Art join reluctantly, knowing that suspicion will fall on them if they sit out; but Gil does persuade the local judge to come by first and try to quell the passions of the crowd first. But by the time they come back, the crowd is about 20 strong and everyone’s at a fever pitch, so all the judge can do is warn them that they need to bring the suspects back alive so they get a fair trial.  The crowd nods and says a whatever-you-say mumble and then hits the road, finding three suspects in the mountains in short order – three men sleeping by a campfire, beside a herd of cattle bearing Kincaid’s brand. 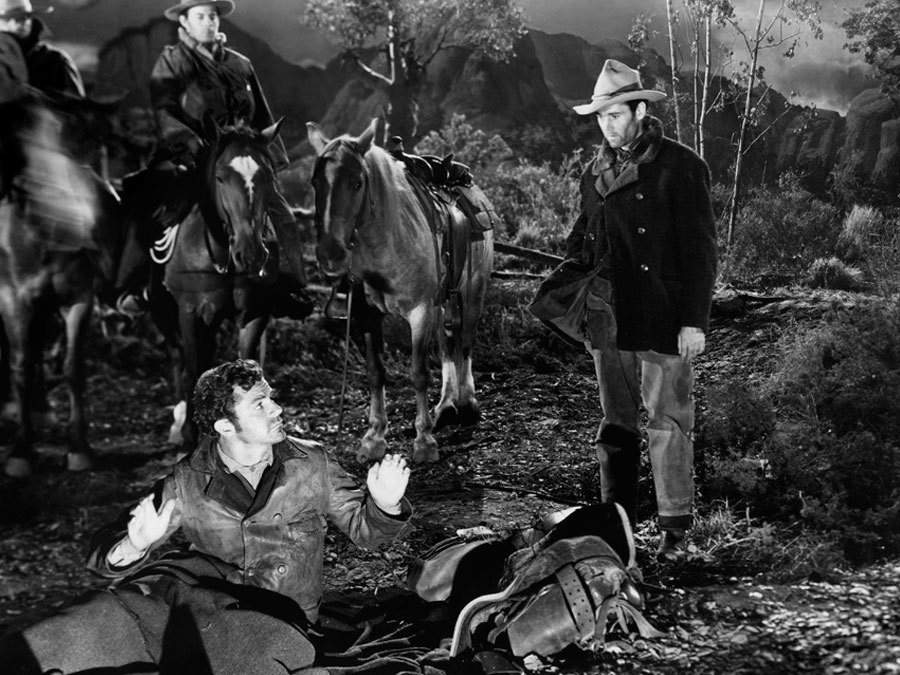 The posse wakes the men – young aspiring rancher Donald (Dana Andrews), and his two assistants, feeble-minded elderly Alva (Francis Ford) and Juan Martinez (Anthony Quinn) who speaks no English.  Donald quickly protests that he bought the cattle fair and square and knows nothing about Kincaid’s murder.  But the posse is dubious – and out for blood – and subjects the three to a lengthy trial by kangaroo court, treating their eventual guilty verdict and execution by hanging as a foregone conclusion the whole while.  Gil and Art, and a handful of others, do dissent, but their influence may not be great enough to stop it…

The whole thing is meant as a cautionary tale against mob violence, with a denouement that reminded me of The Bacchae. What stood out even more so for me, though, was the initial growth of the mob – some of the participants join as a way to Prove Themselves, some are just mean, and some (Gil and Art) are joining in out of peer pressure.  And some are joining in out of fear – the town has been plagued by rustlers in recent weeks and this is a chance to finally stop that lurking dread.

But mostly it felt like the biggest reason people had for joining in was simply that it was something to do. Bridger’s Well had only one saloon, everyone had probably played poker with each other several times over, and as the saloonkeeper says early on the only single woman in town was 82 years old and blind.  Everyone in town was probably itching for some kind of break in the monotony, and the mob presented a chance to do something that many people jumped at without thinking.  Mind you, I’m not claiming that that’s the only reason people might have joined the posse, or that they would have admitted to this themselves, but I suspect that this was lurking underneath their thinking.

“Mob justice” takes a different form today – these days it’s threats in email and SWATTing (“SWATTING” means to call in a fake report of a violent crime-in-progress at the house of someone you want to harass).  The consequences aren’t always as dire as those that befell Donald and his ranchhands, but sometimes they can be.  And it’s got me wondering whether “because it’s just something to do” might be fueling a lot of the mob mentality here as well.