So – remember those true-crime type of TV shows from the 90s and Aughts which had a dramatic recreation of key points of the crime in question?  And remember how some of them used the actual participants in the story in the recreations?  That is precisely what Fires Were Started does as well.

Early on in World War II, British fire departments soon found themselves overwhelmed by the special challenges of fighting fires during wartime; bombs would blow up water mains as well as houses, and the sheer number of fires started during air raids was staggering. Initially Great Britain formed a series of “Auxiliary Fire Brigades” as part of their Civil Defense program, which were meant as backup to each community’s own regular fire service.  But the Auxiliary Brigades faced considerable logistic problems – poor communication, an all-volunteer staff, and most damaging, equipment issues (auxiliary brigades were all issued the same pump trucks, but each community had different-shaped hydrants, so the pump trucks often couldn’t access the hydrants in the communities where they were stationed).  After a couple years the UK rolled out a nationalized wartime fire service to cope with the burden.

Director Humphrey Jennings chose to make a “docudrama” set just before the nationalized service was rolled out, illustrating the struggles of the former “regular firefighters and auxiliary” system.  It’s a slice-of-life glimpse into the workings of one London fire brigade, showing staff on daily patrols, hanging around the station, and responding to an alarm.  The only nod to a plot is to have a character for whom this is his first day on the job, a plot point that lets some of the others introduce him around to various characters and have people explain things to him for our benefit.

This is not a fast-paced film. A lot of attention is paid to the nuts-and-bolts procedural work – the cleaning of the machines, the unrolling and setting-up of the pump trucks, the communications hub tracking the locations of each stations’ trucks.  We do see an actual fire fight, too, but as much attention is paid to the unrolling of the hoses before the team gets to work and the rolling-up of hoses after as it is to actually fighting the fire. Backdraft this ain’t.

Part of the pacing and the granular detail, however, may be because Jennings cast actual firefighters for this project, recruiting one or two staff from each stationhouse in London so no one station was left too short.  While Jennings had a general idea for the overall plot, the firefighters were free to contribute smaller detail within each scene, and most of the dialogue was ad-libbed.  This interview excerpt by one of the firefighters gives a fascinating “making-of” view. 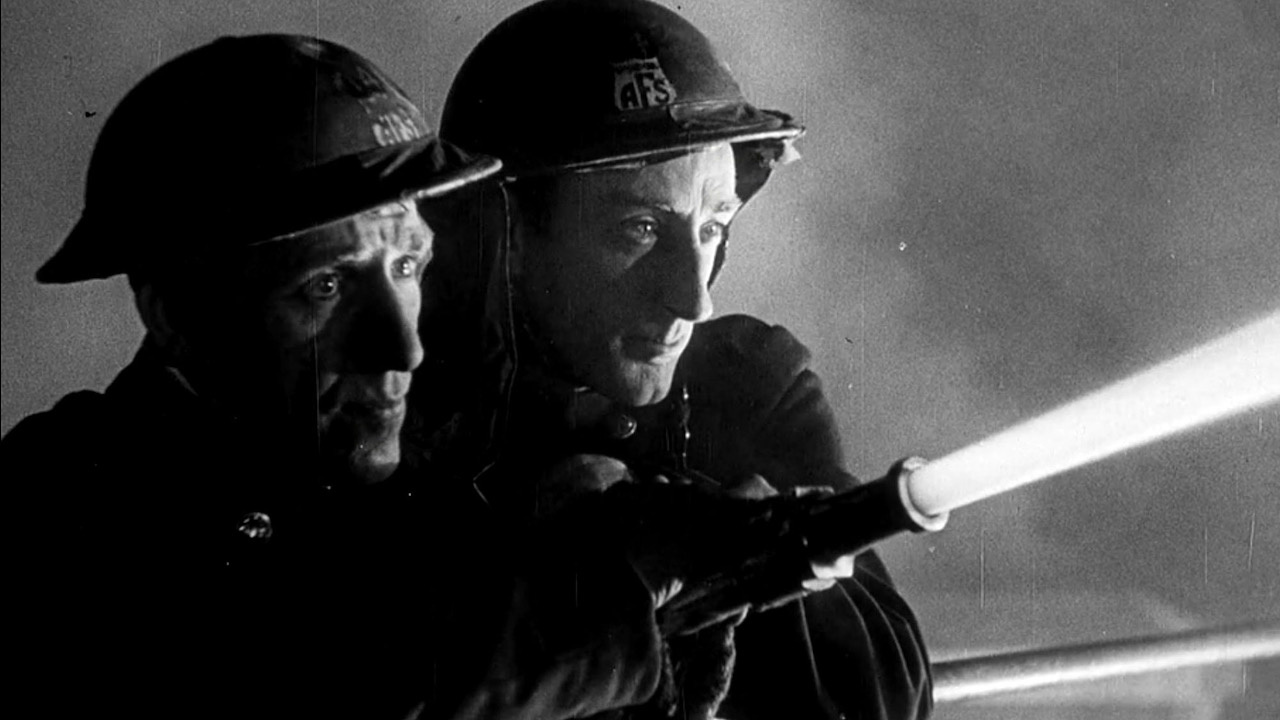 And even though the earlier bits did feel like they dragged some, the non-fussy “performances” from the cast gave things a freshness and immediacy that carried over the slow bits.  It also lent a weight to the one or two things you could call “stunts” – there’s a scene when an injured firefighter is being lowered down off the roof via a rope, and even though he’s pretty solidly locked into place, when a sudden jolt made the cable spin unexpectedly I found myself gasping.  There’s even a fair bit of wartime solidarity-raising; the main fire sequence takes place near a dock where a munitions supply ship is prepped for launch on the following morning, and the firemen are working as diligently as they are to ensure the fire doesn’t spread to the ship and its ammunition.  The final sequences include one of the exhausted firefighters remarking after the fire is out that the unaffected ship is “a sight for sore eyes”, and the shots of the weary firemen returning to their station are intercut with the munitions ship safely setting sail for the front.

Still, it’s more of an intellectually interesting film than it is an emotionally arresting one.  Not anything I can see myself revisiting, but still intriguing.