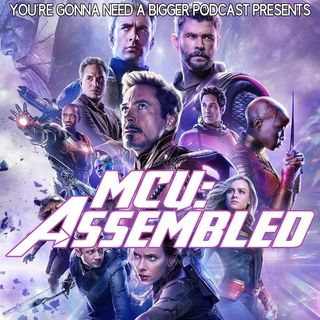 Hang on, that picture’s not got anything to do with the Crash Course*, what’s going on?

My roommate Alex, whom I’ve invoked in a few reviews, is participating in another movie-review project; he’s one of the panelists for a limited-run podcast series, which is examining each and every film in the Marvel Comic Universe in the days leading up to Avengers: Endgame.  I’ve been sitting in on some of the living room screenings (and getting my own secondary crash course in the MCU works, which has been a hoot), and wanted to give you a heads-up.

Sure, watching Thor: Ragnarok is a really different experience from watching Casablanca, but I wanted to share anyway; the discussions have been great fun to listen to, and all the panelists really go deep in their discussions.  (Alex was part of the panel for Iron Man 3, and apparently had a floor-to-ceiling whiteboard full of notes he was referring to as they spoke and invoked things like postmodernism and semiotics.)

They broadcast live at 9:30 pm Eastern Time every evening or so over at their podcast platform, and episodes are available on iTunes and Google Play after that.  And there is a chance that Tim Blake Nelson just might be following the podcast under an assumed name….Check it out!

*There are two MCU films on the list that I’ll be getting to eventually – Guardians Of The Galaxy and The Black Panther – but that won’t be for quite some time.