Mrs. Kay Miniver (Greer Garson) is doing quite well when this film starts.  It’s 1939, and times are prosperous again.  Her architect husband Clem  (Walter Pidgeon) makes enough for them to live a comfortable middle-class existence in a suburb outside London – not too wealthy, but enough for them to have a house on the Thames and pay for piano lessons for daughter Judy and a cat for little Toby and send their oldest Vincent to Oxford, and still allow Kay to splurge on the occasional new hat.  But wealth doesn’t go to their heads, like with Lady Beldon up in the big house in town; they’re polite and charming to everyone, so much so that the kindly old railway stationmaster, Mr. Ballard, wants to name the new breed of rose he’s developed after Kay, and even pit his “Mrs. Miniver” rose against Lady Beldon’s own blooms.  Things are ticking along quite nicely for everyone.

….And then war comes and things start to change.

Not as fast as all that, though.  It’s only in retrospect that I realize how cleverly this film works –  I actually felt like the first half was a little slow and plodding, but only later did I realize it was lulling me into the easy comfortable groove that the Minivers were enjoying, with family teas and occasional dances at the social hall, and their regular visits to church each week, all the Minivers dutifully filing into the pew opposite Lady Beldon and her pretty granddaughter Carol.  There is the occasional reminder of the war –  Vincent enlists in the RAF, the family is encouraged to set up a shelter in their basement – but at first it seems a grand adventure, with Vincent close enough to home to still pop in for family dinner and spin tall tales for little Toby, and woo and win Carol Beldon.  Even when Clem is one of the many men summoned to the town hall for an “emergency” at 2 am one morning, they think nothing of it at first, and make time for quick glasses of sherry while they wait for the civil defense agent to arrive.

That’s actually the point that the film turned for me – because when the civil defense agent does arrive, he orders that all the men present were summoned because they own boats, and they’re to immediately go get them and head to the coast, to await further orders.   As soon as he said that I guessed – correctly – that they were about to be sent to Dunkirk.  We never see Clem in Dunkirk, mind you; but I’d seen the 2017 film and knew he was about to head into some heavy stuff.  And Vincent is called up on his first air mission at the same time, leaving Kay behind to fret about them both.  But she’s also got her hands full constructing the family shelter and keeping an eye out for a rumored fugitive German pilot that’s supposed to be skulking about town.  The air raids are starting to come more frequently as well.  Both Clem and Vincent come home in one piece and in good spirits, but we definitely kept a vigil with Kay, and that sense of cozy security has started to erode.  Within only a couple scenes we’re watching the family huddle in their air raid shelter and seeing great craters dot the lovely English town where the Minivers live.  Then the damage from the air raids creeps closer to the Miniver’s own house – and household.

And the Minivers stiff-upper-lip through it all, even as things get worse and worse.  The Minivers’ little boat is in sorry shape after Dunkirk, but when Kay remarks on it and asks what happened, Clem just waves things off with a smile – don’t fuss about the boat when he’s okay. During a scary air raid, as the whole family huddles in their shelter, Kay tries to soothe her children by calmly reading them a chapter of Alice in Wonderland.  Lady Beldon goes on with her flower show, serenely inviting all attendees to shelter in her own basement when an air raid interrupts the proceedings.  Everyone tries to carry on in the face of war despite it growing nearer and nearer. And that is why the beginning went on so long, I realized – I needed to be grounded in the “before” to really get what they were losing, and appreciate how brave the Minivers and their neighbors were.

As a piece of propaganda it’s an absolute masterwork.  It’s one of the first Hollywood films not to pull its punches against the Third Reich, and Churchill applauded its depiction of English fortitude and bravery, predicting that it would boost American support of the Allies.  FDR was so struck by a lengthy speech towards the film’s end that he had it translated into German and printed on leaflets the US Airforce dropped over German cities.  Even Nazi Propaganda Minister Joseph Goebbels acknowledged the power of the film – “…its refined powerful propagandistic tendency has up to now only been dreamed of. There is not a single angry word spoken against Germany; nevertheless the anti-German tendency is perfectly accomplished.”

But its propaganda is not so blatant as to keep this from being a good film in and of itself. There’s an impressive sequence showing the boats heading off to Dunkirk, a whole flotilla of little tugboats and pleasure craft silently puttering on down the Thames by moonlight. First there are just a few, then a dozen in the next shot, then a few dozen next, and on and on until there’s a massive fleet gliding down the Thames, filling up the whole river.  It’s a stirring image.  I was also quite charmed by the romance between Carol Beldon and Vincent; she meets him before the war, when he’s come home spouting lofty ideals about the class system – she punctures his puffery with a remark so cutting I’m half tempted to use it on Twitter (I’m not sharing just so I can keep it for myself – it’s that good).  Speaking of Vincent, his casting was literally the only thing I didn’t quite accept; Greer Garson seemed awfully young to have a college-age son, and something about Kay’s relationship with Vincent seemed just a shade overly-intimate.  Not to the point that I was creeped out.  But enough that when I later learned that Garson was actually dating the guy who played Vincent in real life that I thought “oh, that explains it”. 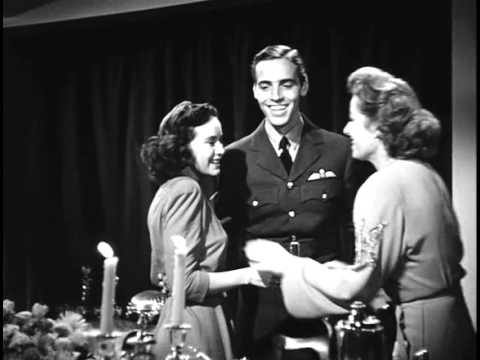 But still this got under my skin to the point that I caught myself involuntarily saying “oh no” when someone’s death is reported towards the end.  I couldn’t really relate to the Minivers at first blush – but by the end I’d been made well enough acquainted with their little world that I felt their losses as keenly as they did. That’s almost a miracle.