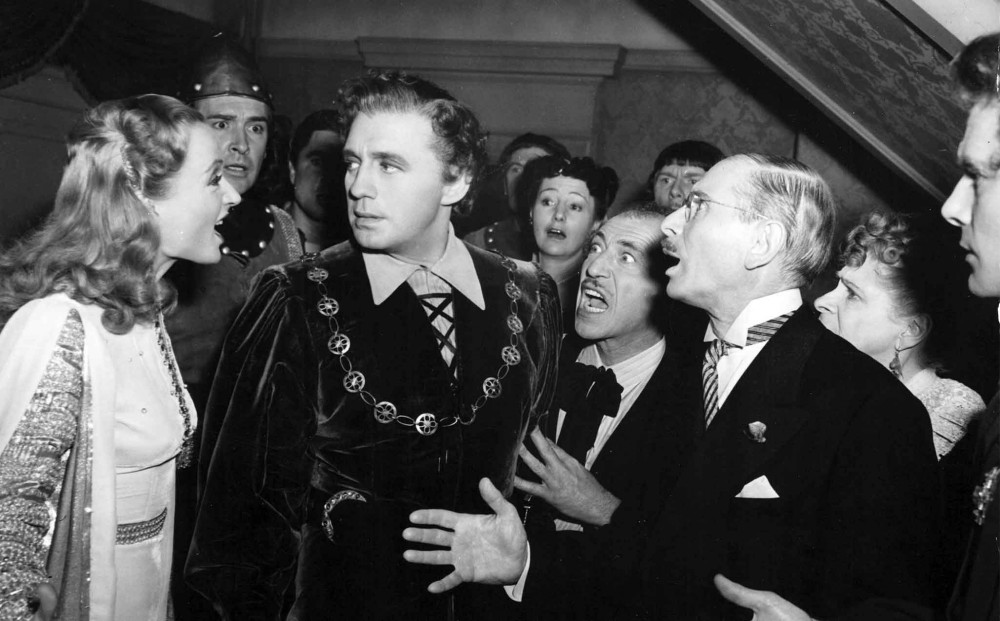 I was aware of the existence of Ernst Lubitch’s To Be Or Not To Be before seeing it – only because Mel Brooks re-made it in the early 1980s.  And after seeing it, I have to say that Mel Brooks remaking this film makes complete and utter sense.

Jack Benny stars as Josef Tura, the leader of a theater in Warsaw.  When the story begins, it is right before the Nazi occupation of Warsaw, and Tura and his team are deep in rehearsals for a new play, “Gestapo”, a satire spoofing Adolf Hitler and the Third Reich. When a government official stops by to urge them to stop – they don’t want to anger the actual Hitler – the troupe simply mothballs the set and costumes and re-mounts Hamlet, with Josef playing lead and his wife Maria (Carole Lombard) as Ophelia.  It’s familiar ground for the company – so familiar, in fact, that Maria knows exactly when she’ll have long breaks in between scenes and uses the time to welcome besotten admirers backstage to her dressing room (not what you think – she’s a flirt, but keeps it innocent and stays faithful to Josef).  Maria is entertaining one such swain – a young pilot named Stanislav Sobinski (Robert Stack) – when the Germans make their move and invade.  Sobinski hurries off to enlist, while Maria joins the rest of the cast in the basement, where they huddle together to withstand an air raid. 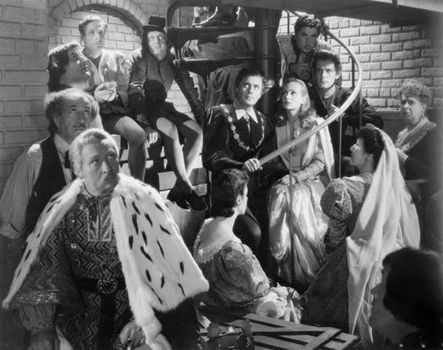 As the war wears on, Sobinski ends up in the British R.A.F. as part of a loyalist Polish division, while much of the theater troupe has secretly begun working for the Polish resistance.  When Sobinski discovers that a “Polish Resistance Leader” named Professor Siletsky (Stanley Ridges) is actually a Nazi spy, and is currently en route to Warsaw to meet with officials there, he makes a daring flight to Poland to warn Maria.  As the company is debating how they can divert Siletsky, suddenly someone remembers – hey, don’t we still have the set and costumes from Gestapo that we never used?  And didn’t we all think that Bronski looked uncannily like Hitler when we were in rehearsals?  Maybe we can use all of that somehow…

There’s more to the story than that, but it gives a good idea, and I don’t want to give much more away than I have already, as it’s a really clever clockwork of a story.  There’s a bit of a subplot woven throughout – Josef eventually learns that Sobinski was hanging out in Maria’s dressing room and she has to soothe his ruffled feathers – but most of it is a tale of a group of zany actors getting the better of the Nazis.  And it’s all definitely played for laughs – the SS Officer stationed in Warsaw is an utter buffoon, and the schemes that Tura and his troupe come up with outsmart the enemy easily (and even outsmarted me at one point!).

That poking fun may have worked to the film’s detriment at the time.  The film came out a few short months after the attack on Pearl Harbor, and people were not in a joking mood about the war.  It was a little too soon, many critics complained.  Others took a dim view of some of the jokes – at one point, one Nazi with a low opinion of Tura’s acting talent quips that “Josef Tura did to Hamlet what we’re doing to Poland”.

Lubitsch stuck by his film, however. He firmly believed in using comedy to belittle those in power and knock them down to size.   “What I have satirized in this picture are the Nazis and their ridiculous ideology,” he argued in a response to one critic.   Jack Benny’s father also reportedly walked out of the first screening, horrified at seeing his son in a Gestapo uniform.  Benny had a heart-to-heart with him afterward about the film and Lubitch’s thoughts on using comedy to poke fun at the Third Reich, and his father tried again – and went on to see the film another 46 times.

This film may have been a little too soon for 1942 audiences, but I greatly enjoyed it.