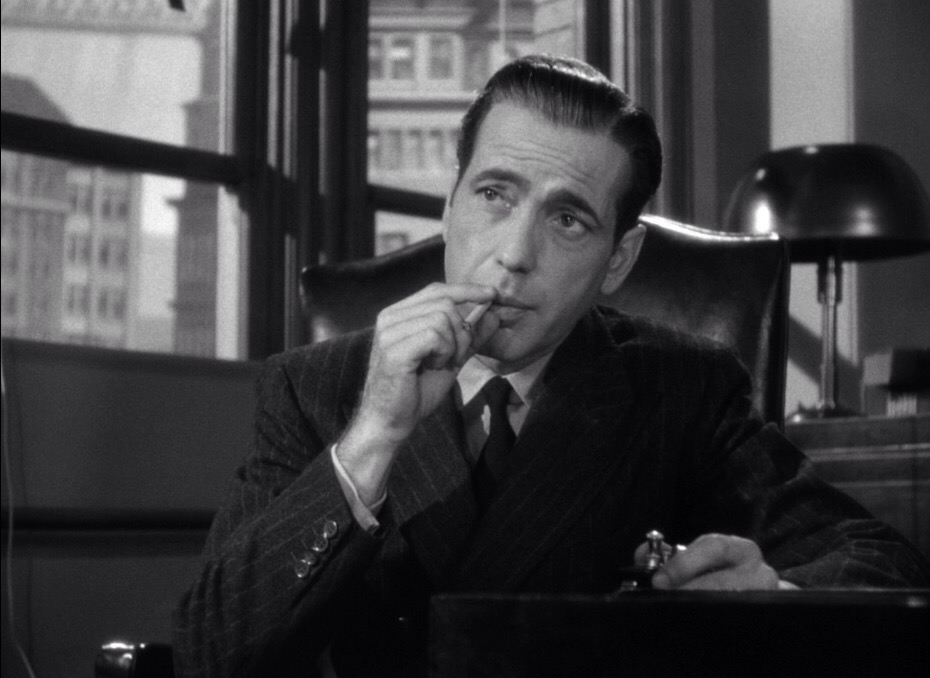 I’m not referring to the movie as such, although it was interesting itself.  I’m talking about the totality of my experience of watching it – I’d been carrying around an impression of “Humphrey Bogart” in my head for years, despite only seeing him in one thing as a kid (African Queen, which will be coming up later on the list and was a bit out of character for him).  I was pretty sure part of it came from clips of Casablanca I’d seen but wasn’t sure about the rest.  Watching this made me realize “oh, that’s where it came from.”

It’s also where my mental impression of film noir came from – but that’s not surprising, since it apparently is the proto-film-noir and so everyone’s mental impression of the genre came from this film.  Bogart is Sam Spade, a private detective in San Francisco who is visited by an elegant damsel in distress at the top of the film.  The woman (Mary Astor) initially introduces herself as Ruth Wonderly, and claims she’s trying to locate a missing sister who’s run off with a ne’er-do-well by the name of “Thursby”.   Curiously, she seems to know an awful lot about Thursby’s habits and whereabouts, but Spade and his partner Archer don’t think anything of it. 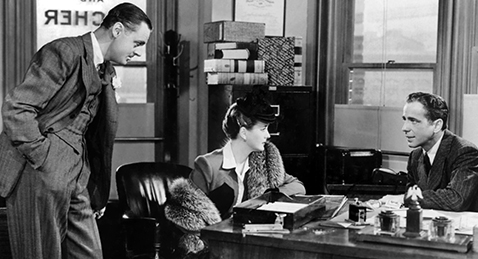 But wait, you’re thinking – “partner”?  Since when does the film-noir private eye stereotype include a partner?  Which is exactly what I was thinking; I’d always thought the trope included a solo private eye, a grumpy, mistrustful, callous sort who liked to work alone.  But I didn’t have to wonder for very long about how a partner fit into the picture – because Archer is killed off quickly, after offering to check “Thursby” out.  That same evening, Spade gets a phone call – Archer has been found dead, shot at point-blank range in an alley. Thursby is an obvious suspect – but then police find him dead as well.  And police consider Spade a suspect for each murder – either he killed Thursby for revenge after Archer was killed, or he killed Archer out of professional jealousy.

Even more confusingly, when Spade calls on “Ruth Wonderly” again to get more details, she confesses that her real name is “Brigid O’Shaughnessy” and that there was no sister; Thursby was her partner in a murky sort of business deal.  She suggests that Thursby killed Archer, but doesn’t know who killed Thursby.  ….She’s also kind of vague about why she had to pull on con on Spade and Archer to begin with – but Spade doesn’t have time to wonder about that, because he notices he and O’Shaughnessy are being tailed by a mysterious guy in a gray suit.  And right when he’s escaped the man in the suit, he’s surprised at home by an effete Greek man named Joel Cairo (Peter Lorre) who insists on searching his room for a statuette he suspects Spade may have – a valuable sculpture of a falcon.  Then Spade learns that Cairo and O’Shaughnessy know each other – and both are seeking the same falcon sculpture, and both are equally afraid of someone who goes only by “The Fat Man”.  Then Spade finds out the man in gray who’s been tailing him was sent by the “Fat Man” and is also looking for the falcon statue – and at this point, we are right in there with Spade about wanting to get to the bottom of just what in the bleeding hell is going on. 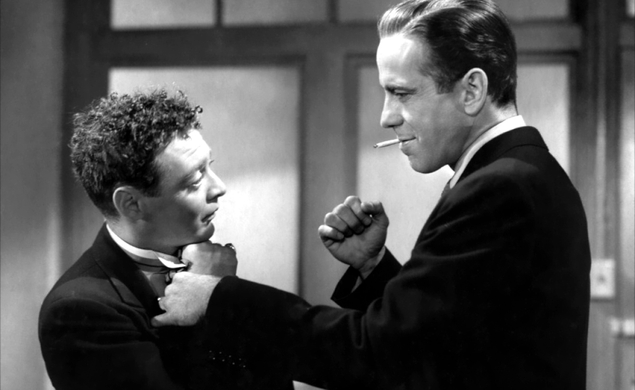 You do find out, by the way. I promise. It’s a complicated plot, with fake-outs and double-crosses and betrayals throughout, but you do find out what the falcon is, why everyone’s trying to get it, how the Fat Man and Cairo and O’Shaughnessy all fit into the picture – and also who killed Thursby and Archer in the process, as well as why. But the actual plot wasn’t as interesting to me as was the sheer number of tropes that seem to have been born in this one picture: wise-ass cynical private eye, check.  Cute secretary who secretly has a crush on the boss, check. Double-crossing and untrustworthy femme fatale, check. The private eye being a heavy drinker, check. The initial mystery turning out to be part of a much more complicated plot, check. Incompetent cops, check. The private eye being a suspect briefly, check. And: private eye falling into lust with the femme fatale who is his client, check. 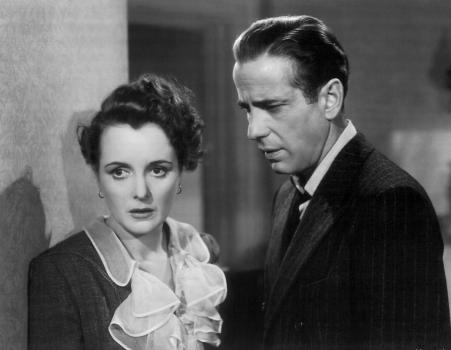 That last element was the only bit that I really had a problem with – because I did not get any chemistry from Bogart and Astor at all.  O’Shaughnessy was tearfully professing her affection for Spade again and again, but I had been writing it all off as a manipulative move on her part, since she’d pulled a good deal of other histrionics earlier in the film in a bid to play on Spade’s sympathy.  He even calls her on it, in fact, in a line that made me chuckle: “You’re good. It’s chiefly your eyes, I think, and that throb you get in your voice when you say things like ‘Be generous, Mr. Spade’.”  He seems to be holding her at this dubious and skeptical arms-length throughout – but at the end, he has a speech which implies that not only has he fallen for her but is also promising to stay faithful to her during a potentially long absence.  I had no idea where that was coming from, since nothing in Bogart’s performance seemed to indicate that Spade was softening towards her in the slightest.

The world-weary snarky cynic, however, he had down flat, and was fun to watch – outsmarting the man in gray, standing up to Cairo, thinking rings around the cops.  He’s a jerk, but a fun jerk to watch.