I link to my blog posts on Facebook, and I’ve had friends and family ask me about my progress through the list, asking when I’ll be getting to one or another movie.  My uncle Peter was especially keen on when I’d be getting to Sullivan’s Travels.  “I think that’s my favorite movie,” he told me over Thanksgiving.  And again on Christmas.  Peter: this one’s for you.

I’d actually heard about this film before, without having seen it.  John Sullivan (Joel McCrea), a director of wildly popular screwball comedies, has decided he wants to Get Serious and adapt a “socially conscious” novel about the deprived underclasses called O Brother, Where Art Thou for his next outing (yes, that sounds like a familiar title, we’ll get to that at the end).  He wants to make something that will educate and inspire the Little Guy.  But towards that end, he wants to understand the Little Guy, and concocts a scheme to dress up as a hobo and live out on the open road for a while first; then when he feels he really gets them, he’ll come back and make his Serious Masterpiece.

Things do not quite go according to plan.  Initially the studio insists on a support team following him in what is basically a fully fitted-out tour bus, complete with lawyer, doctor, publicist and cook on standby just in case; but Sullivan shakes them and manages to thumb a ride pretty quickly.  But he realizes too late that the driver is heading back to Hollywood instead of further out into the wilderness, and the studio finds him again (but agrees to be more hands-off). He meets a young woman (Veronica Lake, known only as “The Girl” in the credits) who’s giving up on Hollywood and trying to save up for a bus ticket home; she learns about his plan and begs to come along, disguised as a boy.  After a couple weeks of slumming it in flophouses and sleeping rough, Sullivan and The Girl call “time” on their experiment and rejoin Sullivan’s support team.

The publicist has been working on a puff piece about Sullivan’s trip and has a great idea for an ending: they give Sullivan a couple hundred dollars in five-dollar bills and send him back out as himself to distribute them to the panhandlers he’d met previously.  But his big stack of cash proves too enticing for one of the homeless men, who knocks him out and seizes all the cash before shoving Sullivan into a boxcar bound for Georgia. When he comes to, he is imprisoned for trespassing and assaulting a guard in his confusion.  And there Sullivan’s troubles really begin – and with them, Sullivan’s education about the value of his past films. 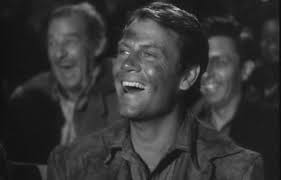 I knew dimly about the plot before, but hadn’t known about Sullivan’s false starts; I was expecting a pretty straightforward on-the-road tale throughout, with Sullivan going through a long slow slide down. The meandering path and the meddling of the studio actually make for a more complex narrative; initially, no longer how long Sullivan was on the road, he always knew that he could hit an eject button that would send him back to his comfortable mansion in Beverly Hills whenever he wanted.  McCrea also plays Sullivan as one of those painfully earnest Hollywood celebrities that wants so hard for their art to be a Force For Good but hasn’t realized that the common folk they hope to speak to all have minds of their own and little patience.  An early scene sees Sullivan turning to another man in a boxcar and asking him his views on Marxism; his only answer is a long stare, followed by his new friend rolling his eyes and walking away.  It isn’t until Sullivan faces real hardship that he really can empathize with the common man he’s trying to reach out to. 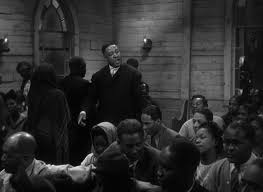 Actually, the scene that gives Sullivan his epiphany is interesting in and of itself. The work crew Sullivan is on is given a rare treat; a nearby church invites them to join in with their church movie night.  It’s a poor African-American Baptist congregation; but still, the scene is refreshingly free of any egregiously stereotypical “black” characters.  There’s a preacher talkin’ gospel, but he’s only doing so to urge his flock to be welcoming to the chain gang. No one does any minstrel mugging at any point.  Admittedly just seeing extras behaving like regular people feels like a low bar today, but at the time it was such a novelty that the head of the NAACP wrote director Preston Sturgess a gushing letter thanking him for the “dignified and decent treatment of Negroes in this scene.” Frankly, after seeing the single depiction of a black character in High Sierra, I’m inclined to agree with that praise. 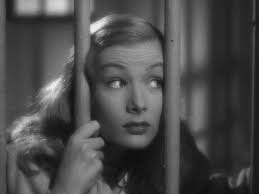 The first few scenes with Veronica Lake also grabbed my attention.  Ultimately her character turns into more of an ingénue, but in the first few scenes, she’s a world-weary, seen-it-all snarker who initially takes pity on Sullivan when he’s posed as a bum; he wanders into a diner, and she overhears him turning down food when he says he doesn’t have enough – so she orders him a plate of eggs, on her.  As they chat, she hints at some of her bad luck with a tellingly current comment:

In reality, apparently Veronica Lake got on McCrea’s nerves and he turned down the chance to co-star with her on a later movie.  She definitely gives the impression of being someone who does not suffer fools, either on screen or off.

…Okay, if you’re a Coen Brothers fan the title of the movie Sullivan wants to make probably caught your eye.  And yes, the Coen brothers have acknowledged that they named their own film O Brother, Where Art Thou as an homage to this one, and have even said that their own film was one that the fictional John Sullivan might have made in his own day.