So the cynical me found a lot to snort about in How Green Was My Valley.  Based on a smash-hit novel by English author Richard Llewellyn, it’s a nostalgic and idealized bildungsroman from the perspective of Huw (Roddy McDowall), the youngest son in the Morgan family, looking back on his early childhood in a small mining village in Wales.  And based on everything I’ve just told you, you can probably predict some of the events: yes, people are tragically killed in mine disasters, yes there’s a couple instances of class struggle, yes there’s a kindly villager who sees potential in young Huw and encourages him to educate himself and escape the colliers’ life (and yes, that schooling does involve a teacher who looks down on our hero for being a little bit too rustic in his demeanor).  Yes, there’s also a long-suffering mother and a stern but kind father.  And yes, the town is a picturesque little idyllic paradise which our now-adult Huw leaves at the end of the film (only in voiceover). 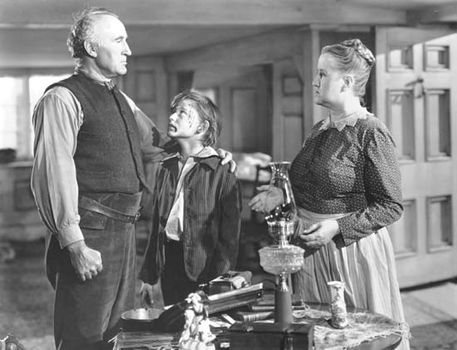 I was actually surprised how little we saw of Huw himself in the film, and how many of the events are things that he witnessed as opposed to being things he did. Yeah, we have scenes of him at school, and a very early scene where he excitedly buys penny candy with some pocket money, but other than that the bulk of the film mainly deals with things happening to his siblings and parents; his brothers and father quarrelling over whether the miners should unionize, the doomed romance between his older sister Angharad (Maureen O’Hara) and the young pastor in their church (Walter Pidgeon) or his sister-in-law Bronwyn (Anna Lee) coping with an unexpected tragedy.  To be fair, though, a lot of the first half of the film sees Huw lying in the front parlor, bedridden from a bad accident, so being a fly on the wall for a lot of other goings-on was pretty much all he could do.  And fortunately, everyone else in the film turns in a fine performance, and the tales being told are all poignant.  But after the third such poignant tale and the third such Death Of A Way Of Life That Will Never Come Again, I started to feel like the sentiment was being laid on a little thick. However, reading a little about the film’s production history made me forgive it a little.  The original screenwriter, Philip Dunne, actually toned down some of the sentiment and treacle from the original book; he once described the book in an interview as “turgid stuff, long speeches about Welsh coal miners on strike.”  Geopolitics lead to the film getting scaled down even further; director John Ford originally wanted a 4-hour epic shot on location in Wales, so we could see the lush green valley described in the story in glorious technicolor.  However, World War II’s Battle of Britain started right as they were about to begin filming, and the possibility of German Luftwaffe attacks made Wales somewhat less suitable as a filming location.  So Ford switched Wales for Santa Monica and Technicolor for black and white, scrapped the glorious nature shots he’d had in mind and focused on the story itself (there are still some beautifully-composed shots, so I personally didn’t miss the color).

And I think the War also added to the tone of nostalgia that pervaded the film. The cast and crew were filming right before the United States entered the War, but they were hearing about it on the news every day; hearing about the real events impacting the real little Welsh villages that inspired their pretend one. Most of the cast were also emigres from the British Isles; Roddy McDowall had only just arrived in the United States as a refugee with his family, fleeing the outbreak of war.  And thus apparently the film became a major bonding experience for them all; no doubt there were a great many heart-to-heart talks people had with each other about the fears of war and for families abroad.  Sometimes members of the cast would even just hang out on set, reluctant to leave the idealized and safe little haven that the film was depicting.  The cast bonded so tightly, in fact, that Ford apparently hosted reunion parties for the cast and crew every year or so, always set close to the date they’d begun filming.

And it’s not a leap to imagine that the nostalgia is also what drew audiences.  Things weren’t perfect by a long shot – there are events about which Huw has only a child’s understanding, but life still seems something of a challenge.  But the film leans into values like family, duty, honor, and faith pretty hard (there’s a lengthy speech that the pastor has with Huw about faith and prayer, during which the nonreligious may find themselves squirming a bit).  The film was released only two months before the attack on Pearl Harbor, but audiences were no doubt already fearful of war and longing for escape to a simpler and happier time when decency won out (at least usually).  This sentiment also carried over during the Oscars – John Ford beat out Orson Welles for Best Director that year, and the film defeated Citizen Kane for Best Picture.  Donald Crisp also took a Best Supporting Actor statuette as patriarch Gwilym Morgan.

So the cynic in me still shakes its head a little; but the compassionate side of me understands this film’s message and appeal very well, thinking of the cast and crew and audience at the time it was made.  I understand that desire for escape (that’s a story I will tell in a much later review), and while I didn’t share it today, I definitely understand why they sought comfort then, and can’t fault them in the slightest.