So, the people associated with High Sierra were pretty fascinating.  And I’m talking about both the characters in the film and the cast and crew; this was Humphrey Bogart’s first starring role, and his first professional collaboration with writer John Huston (who prior to this was Bogart’s drinking buddy).  Ida Lupino, who played Bogart’s main love interest (and more on why I said “main” later), had an even more intriguing story; she ultimately went into directing, mainly in television.

The characters are interesting too – Bogart plays Roy Earle, a bank robber in the clink who’s just gotten pardoned at the top of the film.  But it turns out one of his old bosses pulled some strings to get him out, for he needs Earle to spearhead a heist at a splashy resort in California.  Earle heads west to the Sierra-Mountain camp where the rest of the team for the heist has set up a base of operations, and meets Marie Garson (Lupino), a taxi dancer one of the others fell for in Los Angeles and invited to tag along with him. However, Garson wasn’t as interested in the dude as much as she was desperate to get out of Los Angeles, so as the team waits for the go-ahead for their heist, Garson finds her attention shifting to Earle, and he gradually finds himself reciprocating – a development that has a tragic impact on their stories. 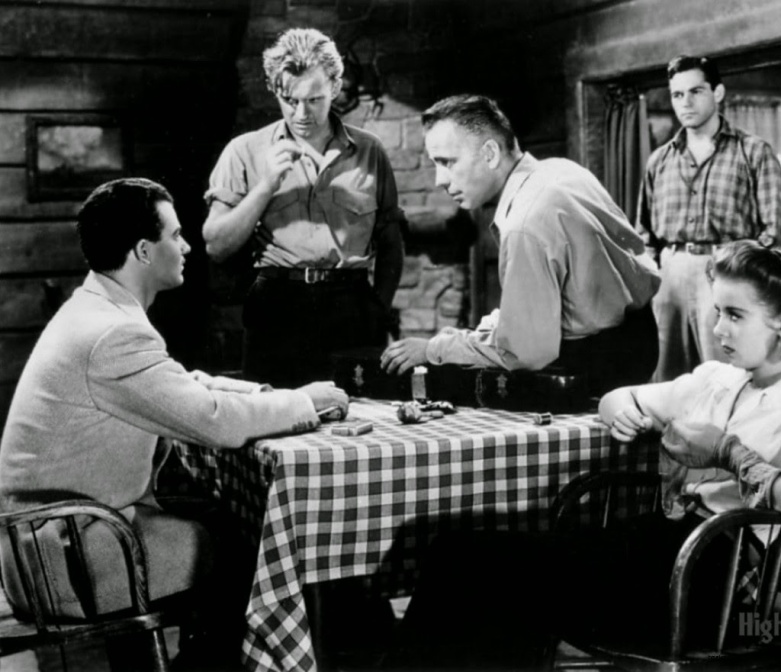 Now, it would be one thing if that were the whole story.  But it’s not – there’s also a subplot with Earle getting sweet on another woman entirely for a while, the daughter of an Okie family Earle meets briefly en route to California and coincidentally meets again in Los Angeles. Velma (Joan Leslie) is a pretty and shy young thing, suffering from a congenital club foot, and Earle is smitten enough to gallantly offer to pay for her corrective surgery.  Which is nice and all – except Velma doesn’t return his affections.  And then there’s another plot thread about Earle’s boss Big Mac, and how his sudden death leads to a power struggle in the crime gang to which Earle belongs which further affects his plans.  And there’s still another bit about a stray dog that starts tagging along with Garson and Earle, and the fact that this dog may or may not be a bad-luck totem.

And…to be honest, that’s a lot for a movie that’s only a little over 90 minutes.  The performances are all fantastic; the characters also all have all sorts of weird little fillips of extra business that flesh them out, like Earle’s being visibly charmed by the natural world – periodically during his drive to California, he often pulls over just to stop and marvel at the country he’s driving through.  Even at the very beginning of the film, when he is let out of jail and a driver is waiting to drive him to a meeting with Big Mac’s representative to hear about the heist, Earle tells the driver to give him a half hour to go hang out in a park first. (There is one glaring exception; an African-American handyman at the camp, played by Willie Best, is largely a pretty glaring and icky stereotype of a guy, sadly.)

There’s also a daring action sequence towards the end, with a high-speed car chase up Mount Whitney followed by a sharpshooter standoff.  A lot of the film was shot on location, which I realized meant someone actually did have to drive that fast up those winding roads on camera.  I’ve driven in that part of the country myself, and was freaked out enough by the steep cliffs and winding mountain passages; I was going about 15 mph in my little automatic rental the whole way.  So seeing someone (most likely a stunt driver) doing the same at high speed on a stick shift was unexpectedly gripping.

But there’s just so much happening in the script that ultimately it felt like it didn’t hang together as well as it could.  Earle and Garson were interesting enough characters that I wanted to know more about them as they were, without having to throw in a spadeful of other subplots and side plots as character development.  Presumably Velma’s story is in there to show Earle’s moral side, but I’m still not convinced that a romantic subplot needed to be added into that.  And while the dog does have a bit of a pivotal role in the final events, I don’t buy that they needed to add all of the hoodoo about him potentially being bad luck.

There may be two reasons there was so much going on in the script.  John Huston was still new to the game as a screenwriter, with only a handful of co-writing credits to his name (Jezebel among them).  While Huston shared screenwriting credit for High Sierra, this was one of the first instances where he was really in charge, and may have wanted to go for broke a little.  Also, Huston’s collaborator was the novelist W. R. Burnett – the film was based on one of his own novels, and he may have lobbied to keep in some bits that Huston may have been able to cut if Burnett hadn’t been around.

Critics didn’t seem to mind, though.  While some reviews sniffed a bit at the heightened melodrama of the plot, most raved about the casting and the performances – justifiably so, I think – and the action sequences.  Whatever I may think of the script, it did lead to the film that won big for everyone involved.