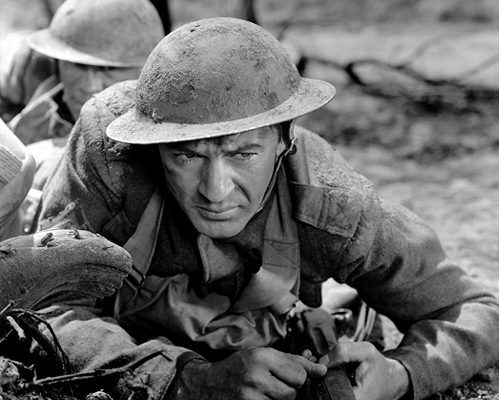 About halfway through Sergeant York, I had what I thought was a genius thought – “hey, this is like the granddaddy of Hacksaw Ridge!”  I was so struck by that thought that I suspected Mel Gibson had been inspired by this film, and did some curious research after watching.  But not only did I not find any evidence Gibson had been inspired by this film, I found scores of other critics all having the same “hey, this is like Hacksaw Ridge!” thought.  Ah well.

To be fair, there are some strong parallels.  Both films are about men from Appalachia who go off to war, despite being conscientious objectors.  And in both cases, the men save an impressive number of lives despite their religious oppositions to killing, earning them not only the respect of their peers but multiple decorations for heroism. And, remarkably, both films are based on true stories (I looked up the story of the real Sergeant York afterward to confirm it).

But that’s where things diverge a bit. Hacksaw Ridge is more focused on the period immediately before and during the wartime service of its subject, Desmond Doss, with most of the action taken up by his main act of heroism during the Second World War.  Sergeant York, meanwhile, is about a hero of the First World War, Alvin York, and covers a good deal of his backstory and a little of his post-war homecoming. 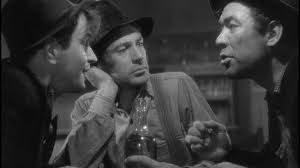 Gary Cooper plays York, who’s a definite hellraiser at the onset of the movie; by day he’s the head of the sharecropping household he shares with his widowed Ma and two younger siblings, struggling to farm in the poor rocky plot of land that is theirs; but at night he rides off to a local saloon to get good ‘n’ drunk.  Ma tolerates it, patiently understanding that someone with such a hard life needs some kind of venting outlet, but both she and the local pastor secretly hope something will help young Alvin see sense one day.  And eventually, Alvin sees – not sense, but Grace.  That is, he sees the pretty Gracie Williams (Joan Leslie) and decides he wants to straighten up a bit so he can woo her more effectively.   But Gracie only starts him on his road to Damascus – it takes a near miss with a literal thunderbolt to turn him the rest of the way towards religion.  And when he converts, he’s all in.

Which makes it all the more complicated for him when the United States finally enters the First World War.  The newly-pious York takes all the Biblical commandments very seriously, particularly the one about “Thou Shalt Not Kill”.  When he’s drafted, he and his pastor file several appeals to excuse him from service, all of which fail; by this time, York is away in Georgia on basic training, and has been impressing his commanding officers with his superior marksmanship, perfected during a lifetime of hunting game in the woods near his Tennessee home.  When all his appeals fail, his commanding officers take him aside for a bit of a chat about how they respect his convictions and all, but maybe he could make an exception during wartime?….

I have to step in here for a minute and state that the wartime acts depicted in the movie are indeed true, and are not overblown Hollywood heroism.  The real Alvin York was involved in an offensive action in France, and was one of a squad of seventeen soldiers sent to capture and neutralize a German machine gun position.  While his squad was able to capture many of the German soldiers stationed there, another group of German soldiers surprised them by re-manning the machine guns while the Americans were coping with their prisoners, opening fire and injuring many of the Americans.  York was uninjured, however, and managed to singlehandedly kill all six of the German soldiers manning the station – and would have killed a seventh if he hadn’t run out of ammunition.  However, that seventh man was the commanding officer of that particular German unit, and was already offering his entire 130-man platoon in surrender to York and the other eight remaining Americans.  I honestly thought that bit was an exaggeration, but again, that is absolutely true.

In my defense, I wasn’t suspicious solely because that was such a remarkable act.  The film had also shown me a couple of borderline corny “dramatic” moments meant to punch up parts of York’s story. York’s miraculous escape from lightning is one.  Another comes later in the film, when his commanding officer is trying to persuade him to drop his conscientious objector suit.  York is sent home with a copy of an American History book and ten days’ furlough to think things over; he spends all ten days holed up on a mountain, reading the history book and the Bible in turns, wrestling with his convictions until a chance gust of wind happens to blow the Bible open to the very passage that manages to finally convince York to take up arms in battle. 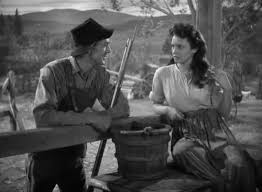 Fortunately, though, the corny moments are few.  There could have been many – Ma could have complained more about York’s hellraising, York and his pastor could have had shouting matches with his commanding officers in pursuit of his conscientious objector status, the “hellraising” scenes could have been broader.  York’s hometown is in rural Appalachia, and even here the film avoids lots of the stereotypes about hicks and hillbillies that are all too common about that region.  Maybe it’s because the real Alvin York was still alive, but the film takes a matter-of-fact tone for the most part.   Cooper’s performance is also matter-of-fact and refreshingly understated, which also helps with the more over-the-top scenes.  It also helped Cooper to win the Best Actor Oscar in 1941.