As with It’s A Gift, Fields is the henpecked and perpetually drunk patriarch of a family who are all disappointed in him.  He gets a job which he is staggeringly bad at, he has ideas for get-rich-quick plans that initially crash and burn, but due to some highly improbable turns of events things turn out alright in the end.  And on the way there is an assortment of slapstick, situational comedy and sight gags. 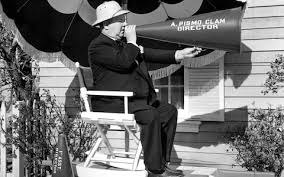 With this film, though, there’s a bit more of a cohesive plot.  As “Egbert Sousé”, Fields’ greatest desire is to while away the day at the Black Pussy Cafe sipping a series of cocktails (served up by a bartender played by Shemp Howard, one of the future Three Stooges and perpetually glum-faced here).  But his family – wife, mother in law, and two daughters – are urging him to get work. After blundering into a stint at directing a movie (and blundering right back out after only a few disastrous minutes), he stumbles equally blindly into a bank robbery, accidentally apprehending one of the criminals as they escape.  He is offered a security job by the grateful bank president, impressing both his eldest daughter (whose fiancé is a teller there) and wife (the bank president also promises to give them a tiny break on their current mortgage). 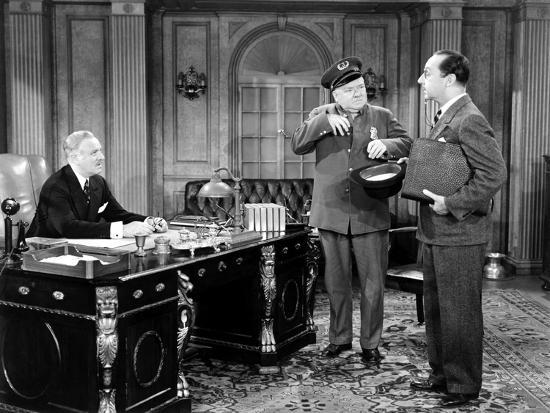 The whole thing gives Sousé a bit of a swelled head, and he boasts about his fortune at the Black Pussy – within earshot of a con man trying to offload some worthless stock shares in a failed mine.  Sousé is taken in by his sales pitch, and brings him to the bank, urging his future son-in-law, Og Oggilby (Grady Sutton) to invest in the mine.  Even worse – when Og protests that he’s between paychecks and will have to wait four days, Sousé tells him to just secretly borrow money from the bank.  Og is a simple and trusting sort, and agrees.  And that’s when the bank examiner J. Pinkerton Snoopington turns up to conduct a surprise audit.  Eeek!  Og panics – but not to worry, Sousé says, he has a plan….. 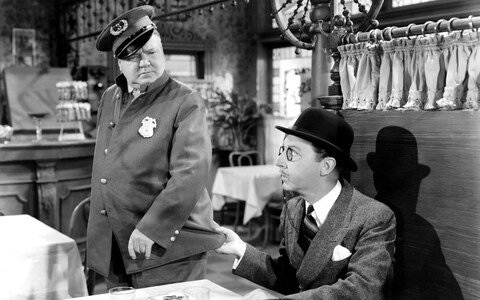 Of course, comedic hijinks ensue – Mickey Finns, fainting bank tellers, drunk pratfalls, adorable children saying naively insulting things, and a slapstick car chase, with everything tying up neatly in a happy ending for all concerned.  Even the movie subplot suddenly comes back to give Sousé an additional reward.

Mind you, I’m not saying I was wholly won over. This is still solely a collection of gags strung onto a very slim plot thread. But at least there is a thread there.  Fields also just plainly does more – in It’s A Gift, he was just sort of reacting blandly to things that happened around him, but in The Bank Dick he takes more of an active role in the goings-on, and just that one change makes him much more interesting.  He’s still an absolute buffoon, but at least he’s a buffoon that is doing things instead of just sitting still.

It’s possible that Fields may have insisted on that himself.  He had a much greater degree of creative control on this film than he had in previous outings, even writing the entire screenplay (using the pseudonym “Mahatma Kane Jeeves”, a punning take on an aristocrat’s command to a servant: “My hat ‘n’ my cane, Jeeves!”).  The critical reaction was mostly positive, although there were still those who as dubious as I was about the stock characters and the meandering plot. On the other hand, this was apparently on Stanley Kubrick’s top-ten favorite film list, so go figure.