I discussed the Crash Course with someone where I work the other day – he’s a movie buff, so he was very excited about it – but then he asked me what my next film was coming up.  I said that it was Stagecoach.   “….Hang in there,” he said, grimly.  And even though I hadn’t yet seen it, I knew enough about it by reputation that I just nodded back, resigned. Happily, though – while it wasn’t perfect, it wasn’t that bad.

All the tropes you’d recognize from either Westerns or “people thrown together in some kind of transit that runs into trouble” pictures probably came from this.  The bulk of the story is a stagecoach journey from Arizona to New Mexico, conveying seven strangers from one town to another for various reasons – “soiled dove” Dallas (Claire Trevor) and alcoholic Doc (Thomas Mitchell) are being thrown out of town for being public nuisances, Lucy Mallory (Louise Platt) is a pregnant soldier’s wife hoping to meet up with him at his new post, Mr. Gatewood (Berton Churchill) is the bank manager who’s been embezzling funds and has decided to skip town, Mr. Hatfield (John Carradine) is a drifting gambler who thinks he recognizes Mrs. Mallory, and Mr. Peacock (Donald Meek) is a traveling whiskey salesman.  As they set out, the coach driver learns that there is a troupe of Apaches prowling the coaches’ route and raiding travelers, so when he sees outlaw Ringo (John Wayne) en route and heading his way, he picks him up too – Ringo can help fend off Apaches, and once they get to New Mexico, he can turn him in for the reward money. 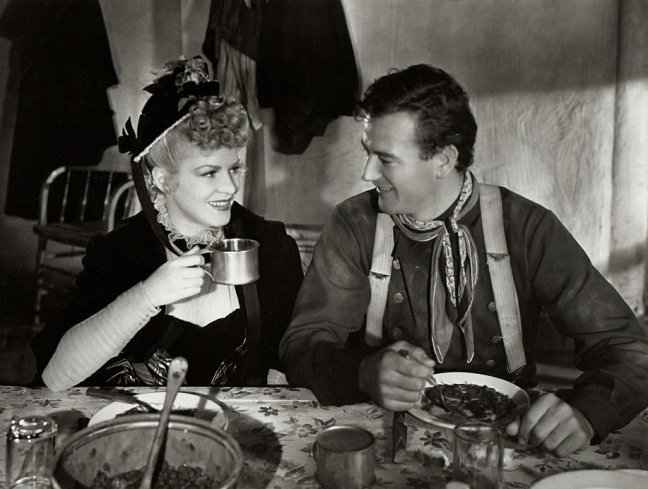 The trip takes a little longer than anticipated, and the promised cavalry escort doesn’t arrive.  And the stagecoach is awfully close quarters for everyone, especially after Doc gets his hands on Mr. Peacock’s whiskey sample case.  And the big hulking Ringo has to sit on the floor at everyone’s feet which takes up room, and Mr. Gatewood will simply not shut up about how uncomfortable he is, and Mrs. Mallory is feeling a little urpy, and…yeah, you’ve been on that bus or that plane at some point in your life, and it made you grumpy about everyone else with you.  Ringo notices that the rest of the passengers seem to have a different sort of grudge against Dallas, though, and comes to her defense when the others try shutting her out.  And then when Mrs. Mallory’s water breaks at one of the waystations, Dallas steps in as midwife and assistant to Doc and earns everyone else’s respect as well.  But the passengers still have about one more days’ travel before New Mexico. Alone. And the Apache are near… 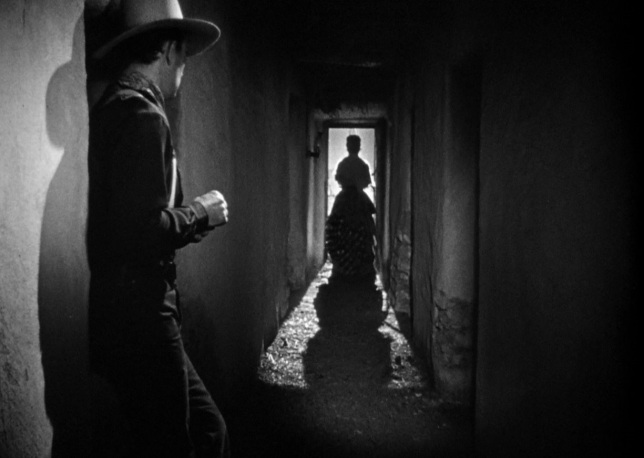 So, I admit that the grudge I had against this film was because I thought that it would be All John Wayne All The Time.  It is the film that made John Wayne John Wayne, pretty much, but his character is not emphasized as much as I thought it was going to be; he’s got a big part, but is still very much part of an ensemble.  Unfortunately, even though this is an ensemble piece, there are some characters whose individual stories aren’t all that well fleshed out; we know Ringo’s deal (broke out of prison to find the man who shot his pa), and Mrs. Mallory’s story is obvious (wants to be with her husband), but some characters’ stories are a little vague (I still don’t really get Mr. Hatfield was doing there, or understand his whole backstory with Mrs. Mallory).  And in Dallas’ case, the vagueness of the backstory was deliberate – it is never stated outright that she is a prostitute, all we see is that all the other characters avoid talking to her or sitting next to her.  I mean, I eventually got it, but only after several minutes of being unsure.

I also thought that the film could have ended a little quicker. Once the coach gets to New Mexico, instead of ending with the passengers each scattering to their respective fates, the story follows a couple characters for a surprisingly long while longer to tie up their stories, and I kind of wished everything had ended with everyone getting off the coach and going their own ways.  Maybe it would have felt a little too neat, but as it was I found myself checking how much longer the post-coach scenes were going to go.

John Wayne notwithstanding, the real star of the show is the location.  Several years ago I remarked to a friend that it is impossible to take a bad photo of the American Southwest, simply because the landscape is so stunningly beautiful.  Director John Ford apparently had the same opinion – he favored Westerns not because he was into cowboys, but because it was an excuse to shoot in places like Monument Valley.  Shot after shot captures the tiny stagecoach moving through the vast sweep of the desert, the huge mesas and rock towers and cliffs towering over them or shimmering in the distance.  It’s absolutely beautiful to look at – and when we’re reminded of the threat against our passengers, it also turns disquieting at the same time, because it’s a biiiig open desert they’re moving through all alone.  For me, though, awe at the landscape was more so the reaction, to the point that it overshadowed John Wayne at his John Wayne-iest.