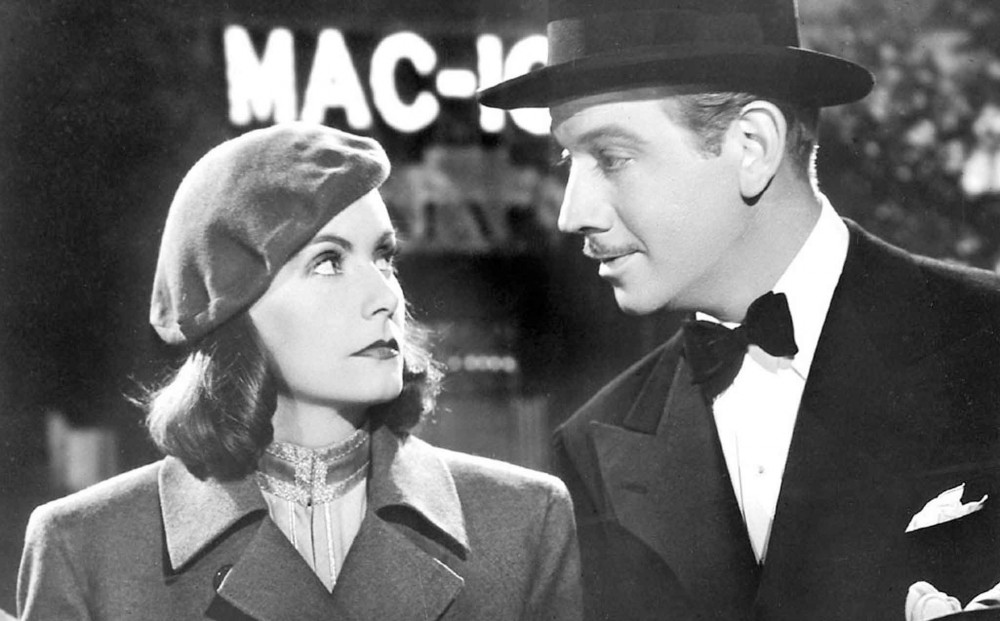 So Ninotchka was fun, but I had a heck of a time figuring out why.

If you dissect it, there’s a lot about this film that seems problematic, un-fun, or just plain odd.  It’s a frothy comedy that uses Stalinist philosophy as a running gag and the Nazi threat as a throwaway joke; it features Greta Garbo in a comedy role; there’s an oogy scene with the romantic lead persistently trying to pick Garbo’s character up, and not only does she actually give in, she turns on a dime to do so.  It’s a winking Ernst Lubitsch bedroom comedy that tries to write off the driving forces behind World War II as easily-dispatched strawmen, with women as even more easily-swayed creatures prone to giving up their principles for the sake of a fashionable hat.   On paper I should have hated this film; and yet, I found myself laughing out loud more than once, to the point that Alex remarked that he overheard me from his room and said “I’m assuming you liked it, then.”

The whole thing is set in Paris right before the war; a time when, as the introduction states, “if a Frenchman turned out the light, it was not on account of an air raid!”  A trio of bumbling Soviet envoys have come to Paris to sell off a former countess’ jewels confiscated by the Bolsheviks to raise money for the government’s coffers.  But to their misfortune, the countess in question is living in Paris in exile, and her boytoy Leon (Melvyn Douglas) is a lawyer to boot, so they launch a lawsuit to block the sale.  The lawsuit – plus the three envoys’ increasing interest in Paris’ more bourgeois pleasures – leads to the Soviets sending in the big guns, in the form of Special Envoy Nina “Ninotchka” Yakushova (Garbo).  Yakushova is a by-the-book, all-in Marxist and party faithful who spends her first day sneering at Paris fashions, and visits the Eiffel Tower only to study its metal content and construction.  But she’s also attractive, which spurs Leon to give up the pursuit of the countess’ jewels in favor of pursuing her.

Unquestionably, Garbo was the highlight for me – particularly early on.  Yakushova is written as a completely humorless stoic with no interest in romance or poetry or frivolity and with passions reserved solely for the Soviet Party.  She has some darkly comic lines – at one point, she responds to an inquiry about “mass trials” back in Russia with the observation that they were “a great success” since “There are going to be fewer, but better, Russians.”  When she’s trying to put off Leon, it’s even better; when he says that his compulsion to flirt with her is a “natural urge,” she simply retorts “Suppress it.”  Another exchange:

The lines are witty enough, but Garbo’s performance makes them even funnier.  Her Yakushova is blunt, forthright, no-nonsense and all business; I found her strangely like Mayim Bialik’s character on The Big Bang Theory.  What’s even stranger –  I’m not a fan of Big Bang Theory, but I thought this was a hoot.  Later scenes with a loosened-up Yakushova are still funny, particularly a scene when Yakushova gets completely blitzed on champagne and tries to deliver a proletariat-rallying speech in the middle of a crowded ballroom.

There is one bit I shuddered at; a lengthy scene in which Yakushova heads to a cheap café for a meal, and Leon trails her, hoping to pitch some woo.  Yakushova takes a seat alone at a table; Leon sits at the next table with a “fancy meeting you here!” quip, and then spends five very long minutes trying to urge her to “smile” or “talk to me” while Yakushova stares stoically ahead, pointedly ignoring him.  The scene does end with Yakushova finally cracking a smile (at Leon’s expense), and I understand that the times were different, but this is a moment that has not aged well at all.

Speaking of timing, though, that may be a clue as to why the rest of the film hangs together and is such a delight.  As that early introduction implies, Ninotchka was released only a month after the Second World War broke out in Europe, at a time when all of Europe – and Parisians in particular – were looking ahead to a very grim few years.  It was time for everyone to buckle down and get serious – and so a film celebrating frivolous delights and love and frolic was no doubt well received as a wistful fairytale of a more innocent era, at a time when people feared whether that sort of love of frivolity would ever return.