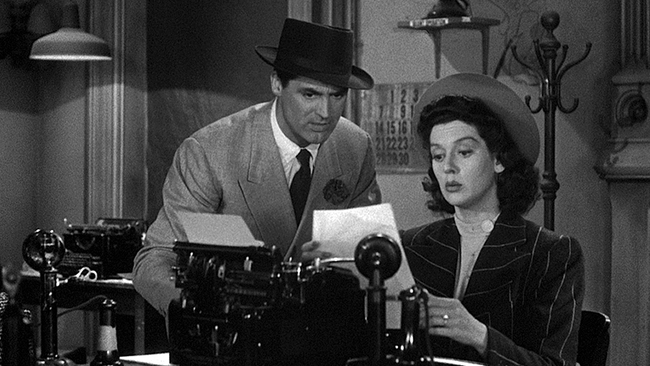 I appreciate quick wit, and I appreciate the madcap pace of screwball comedy.  I also appreciate Cary Grant when he’s at his screwball best.  So I’m not sure why I didn’t really get into His Girl Friday, which has all of the above elements.  Maybe my problem is simply that it has a little bit too much of them.

Grant may have one of the top-billed spots here, as Walter Burns, chief editor of Chicago’s Morning Post newspaper.  But his co-star, Rosalind Russell, ably does most of the heavy lifting as Hildy Johnson – formerly Hildy Burns, Walter’s ex-wife and one of his papers’ star reporters.  At the film’s rise, she’s already divorced him, and has come by the Post office to announce that she is quitting the business and is looking forward to a happy domestic life as the wife to an insurance salesman, whom she’s due to marry on the morrow.   Burns is convinced that she doesn’t really want to quit, though, and concocts a set of schemes to lure Johnson into staying – including luring her with a chance to interview Earl Williams (John Qualen), a man on death row for a controversial murder case. He’s scheduled to be hanged the following day, Burns opines, but he may be innocent, and may just be getting set up by the corrupt sheriff.  A star reporter like Hildy could save the man’s life, if only she’d consider one last piece… 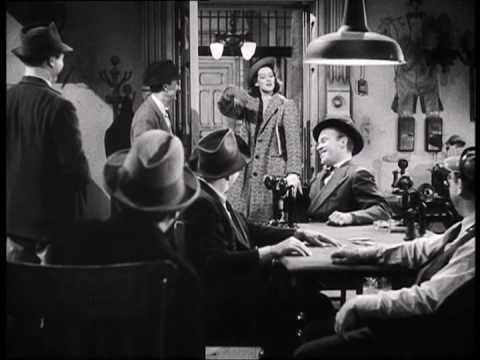 Johnson relents, and drops by the courthouse to speak to Williams, planning to write up her interview real fast before hopping the night train to Albany and retirement.  But the familiar vibe of the courthouse press room slows her down a bit, and then when Williams stages a jailbreak, positioning Johnson in just the right place for a coup of a scoop, Johnson is really hooked, struggling to cover the story and still make it to Albany in time.

The film is based on a 1928 play called The Front Page, which is set entirely in the courthouse press room.  Hildy Johnson is a man in the play, and while he is indeed planning on a retirement and sees his plans get interrupted by the jailbreak, there’s no subplot about a jealous ex of Johnson’s trying to win him back.  So it sort of makes sense to me that that element was the weakest part for me.  Grant is clearly having fun with the role, Russell even more so (honestly, she acts rings around Grant); but too many of Burns’ schemes to stop Johnson are actually pretty mean, like sending interns to frame Johnson’s fiancé for crimes by planting stolen goods on him. Twice.  It’s not a good look for Grant, and it put me off.  To make things worse – Johnson catches him at it each time, but by the movies’ end it seems she’s cheerfully forgiven him.

The film also moves at a breakneck pace – way more so than other screwball comedies, to the point that I occasionally had trouble following what was happening or understanding what people were saying. It’s almost as if the extra subplot getting squeezed in made everyone involved feel like they had to talk even faster just to get in all the extra words.  Again, I know that screwball comedies are supposed to be fast, but this one felt just a little too fast for my taste. 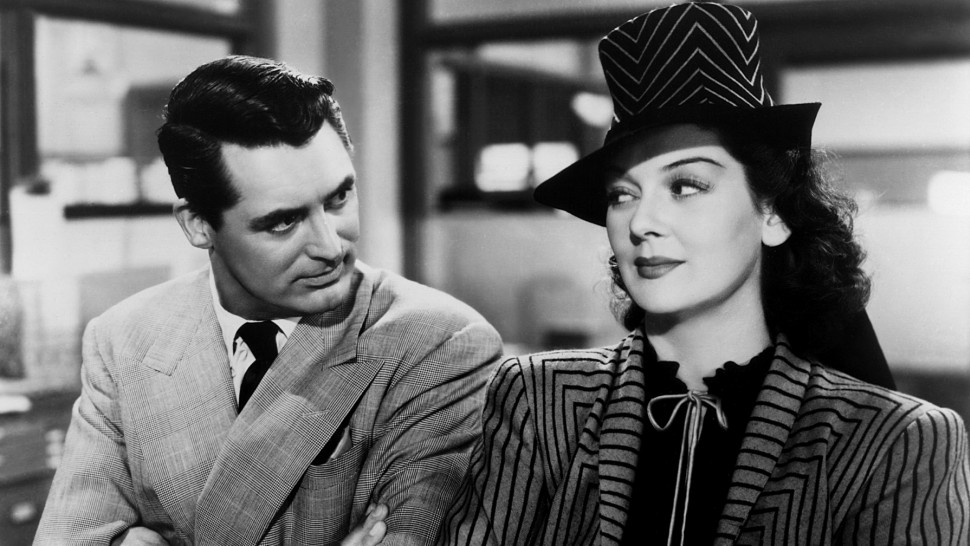 There are some fun one-liners, and Rosalind Russell is a treat, but ultimately there was a little bit too much to wade through to find the gems for me.