You’re a weirder movie than I thought, Gunga Din.

Cary Grant has star billing as Sgt. Cutter, one of a trio of British officers in the Indian subcontinent in the 1800s. Cutter and his colleagues, Sgts. MacChesney (Victor McLaglen) and Ballantine (Douglas Fairbanks, Jr.) are a little unorthodox and prone to hijinks, but very effective at what they do, so they are sent to a remote outpost to rebuild and protect its telegraph station after an act of sabotage.

Sgt. Cutter has a get-rich-quick streak, though, and throughout his tour of duty he’s been talking to the locals about where there might be “hidden treasure” and setting off on wild goose chases after rumors of riches.  During his tour at the outpost, Cutter befriends Gunga Din (Sam Jaffe), an older Indian gentleman who desperately wants to be a British soldier but is too old and feeble so instead he is serving as the platoon’s water carrier.  Desperate to get in good with the soldiers, Din tells Cutter that there is a secret golden temple hidden somewhere nearby, and the pair steal out one night to find it.  Turns out that Din was right – except that what Din did not know is that the temple is the home base for a growing army of Thugees, devotes to the goddess Kali who’ve adopted murder as their form of worship and who have targeted the nearby British outpost as their hunting ground.  Cutter is captured by the Thugees as they try to sneak out and back to base, leaving Din alone to try to escape the Thugees and sound the alarm.

Now – I knew going into things that this film was loosely based on a Rudyard Kipling poem – one that I was only vaguely aware of but never read all the way through.  What little I knew suggested that it was about an Indian soldier, working with the British forces, who did…something noble.  I looked up the poem after, and it was very different – in Kipling’s work, Gunga Din is still a water carrier, but his heroic act from the poem is simply dragging a soldier to safety during a battle and then getting shot.  There’s no Thugee temple, no treasure-hunting – none of it.  The film actually throws in Rudyard Kipling as a character towards the end, implying that he learned of Din’s adventures while touring India and was inspired that way, but reportedly the Kipling estate really didn’t like that because the film was so different from Kipling’s work.

And about half the film’s plot is taken up with Cutter and his colleague’s hijinks anyway, and Din doesn’t even show up.  About a third of the film deals with Ballantine and his impending marriage – his tour of duty is soon to end, and his fiancée Emaline (Joan Fontaine) is waiting for him, prepared to marry as soon as he’s discharged and whisk him away to a well-placed position in her father’s tea company.  Cutter and MacChesney think that sounds dull as all hell and spend a good portion of the film trying to sabotage his plans – in whimsical madcap ways, though.

Reportedly Cary Grant was originally cast as Ballantine, but saw the comedic potential in the role of Cutter and asked for that part instead.  There is some debate about whether Fairbanks was originally cast as Cutter and they just switched, or whether Grant himself suggested Fairbanks after his casting change; there’s even a tall tale that both actors actually flipped a coin to determine who would play Cutter.  However Grant got the part of Cutter, he exploited the comedy potential to the hilt, injecting a screwball comedy note into many of his scenes (there’s a scene between Cutter and an elephant that would fit perfectly into Bringing up Baby).  Then the tone shifts towards the end to play up Din’s bravery and the danger of the Thugees, a change so sharp as to cause whiplash (although there was some unintentional comedy involving a “pit of poisonous snakes”, in which the snakes were clearly fakes being jiggled along on wires). 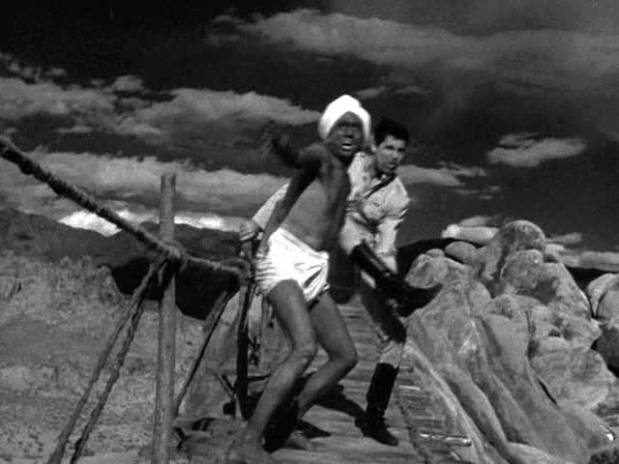 But most of it was comedy – something I found baffling, since I was expecting a more red-blooded story of military heroism.  Instead this was feeling more like all the goofy parts from Indiana Jones And the Temple Of Doom.  Interestingly, there’s a reason for that – screenwriters Willard Huyck and Gloria Katz drew directly from Gunga Din when writing their Temple of Doom treatment, and even introduced the idea of a Thugee temple (all Lucas knew was that he wanted there to be an evil cult of some kind).  In retrospect, though, I feel like there’s also some comparisons to M*A*S*H – Cutter and MacChesney come across like Hawkeye and Trapper John at their most irreverent.

Critics at the time were generally positive, although Time Magazine noted it was an example of a recent trend Hollywood was taking to inject screwball comedy notes into different genres.  Dissenting critics took a dim view of how Indian culture was depicted in the film – while the Thugees were a real group, they were not devotees of Kali after all, and were instead simply mercenary highway robbers. Dissenting critics weren’t that impressed that the only Indian characters we met were the evil Thugees and the self-sacrificing Gunga Din – and ultimately, I wasn’t impressed by that either (nor by casting a Caucasian actor as Din, and then slapping a lot of makeup on him).  Grant is at the top of his form, though, which at least made this watchable, if a bit baffling.