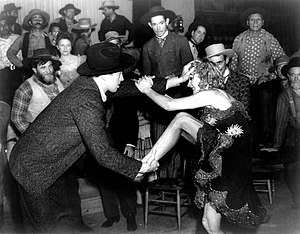 It took me a while to figure this film out.  The opening was so over-the-top that I was watching with a literal dropped jaw; it was a slow pan down a stereotypical “Wild West” town street, panning over scores of cowboys fighting along the way, and coming to rest on the porch of an establishment literally called “The Last Chance Saloon”, where about twenty cowboys were whooping and hollering and merrily firing guns in the air. As I gaped at this, one man even rode his horse through the doors of the saloon and then back out again.

….What on earth was I getting into?  This was reminding me of some of the excesses from Blazing Saddles – only Mel Brooks was kidding with his work.  But this film….they weren’t serious, were they?

Not only did I end up less certain that they were serious, I ended up less convinced that it even mattered.

Said saloon is the home base for Kent (Brian Donlevy), a gambler and shady dealer and all around oogy dude; he and his sweetheart, saloon singer Frenchy (Marlene Dietrich), are the unofficial power in the little podunk town of Bottleneck.  Mayor Hiram Slade (Samuel Hinds) is in cahoots with their schemes, so he’s no threat; and as for Sherrif Keogh, when he asks a couple of nosy questions at the start of the film, someone shoots him to shut him up, and Slade appoints “Wash” Dimsdale (Charles Winniger), the town drunk, as the new sherrif.

But to everyone’s surprise, Wash takes the honor seriously.  He was once the deputy to a highly-esteemed lawman by the name of Destry, and Wash swears off alcohol, wanting to bring honor to the profession.  He even sends for Destry’s son Tom (Jimmy Stewart) to serve as his own deputy.  Tom’s just as much of a respecter of law as his father and accepts the job – but to Wash’s great disappointment one thing Tom doesn’t believe in, is guns.  The rest of the town collectively scoffs and goes back to their usual hijinks – until Tom Destry starts asking some probing questions about both Sherrif Keogh, and about the running poker game Kent has going on in the saloon… 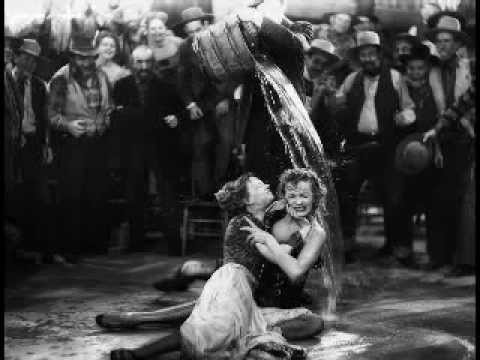 In a move that may have been catering to a very specific audience, Frenchy gets into a lengthy catfight with Tom Destry’s landlady on his first day in town, one which destroys most of the saloon before Destry finally breaks things up by dousing them with water.  But otherwise – in a possible return-to-form in her career – Dietrich is the same sly singer she was in Blue Angel, only a bit older; and, surprisingly, unsuccessful at winning over the man she’s got her eyes on.  The first time she tries seducing Destry, it’s clear that it’s to keep him in check – but the second time, it seems like Frenchy sort of…means it.  And the upright Destry, devoted to his job, fends her off both times. 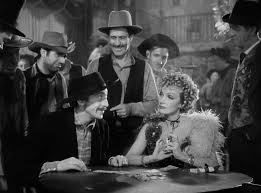 It wasn’t until halfway through the film, with a small moment with a minor character, that I finally understood this film for what it was.  There’s an ongoing bit of schtick with Destry’s landlady, who proudly goes by the name Callahan – but her current husband is not the original Callahan.  He’s her second husband, a Russian guy who just looks a lot like him.  And for reasons which the film fails to explain, Mrs. Callahan is trying to hide that fact, constantly upbraiding him for not living up to her memory of the original.  The pressure drives “Callahan” to compulsively gamble, playing Frenchy in frequent poker games – which always end with her encouraging him to bet his pants.  He loses, she claims her prize and he is forced to steal pants from the other tenants in their inn, making his thefts throughout.  But all of that is just a little bit of a background throwaway gag until the moment when Destry is alone in his room and hears a noise in his closet – and throws open the door to see “Callahan” there, getting dressed in Destry’s own trousers. After a beat of shocked silence, “Callahan” simply says: “Would you believe me if I said I was waiting for a stagecoach?” 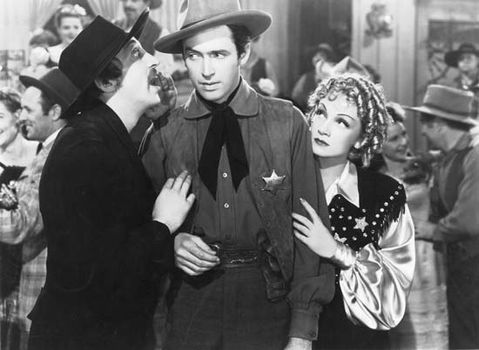 And that is when I got that this film was in on the joke.  Mel Brooks borrowed a lot from this film for Blazing Saddles – Madeline Kahn’s character “Lily von Schtupp” is an obvious echo, but I realized that Harvey Korman’s corrupt businessman, the fast-shooting Waco Kid, and even the befriending of a local to serve as deputy all have their ancestry right here.  Mel Brooks may not have consciously intended thus, but Brooks was poking affectionate fun at Western film tropes – so it makes sense that he was influenced by a film that was having fun with those very tropes.  Destry Rides Again’s filmmaker must have known, and intended, for his film to be a little bit ridiculous and cartoonish; it’s just that instead of pushing it all the way into farce, Destry Rides Again mixes the comedy in with a bit of seriousness to create an ultimately engaging story.