Casablanca is another Mt. Parnassus of filmdom; one that arguably deserved to be seen in a proper theater.  At least, that’s what I told myself when I saw it was screening at a local cinema on Valentine’s Day.  (The signature cocktail they invented for the audience was probably not necessary, but I indulged anyway.)  I’ve actually seen the film before, but was very surprised to see that there were elements I totally didn’t remember – and what’s more, those were the elements I really liked.

For the two of you who are wholly unfamiliar – the story is set in the city of Casablanca (big surprise), which in 1941 was a major port of embarkation for refugees from occupied France hoping to escape to the still-neutral United States.  As with any host city for refugees, many of them often were stuck there for a while, waiting their turn (or seeking legal or not-so-legal ways to jump the line a little).  Plenty of bars have sprung up in the meantime to cater to them; among them is “Rick’s Place”, run by American expat Rick Blaine (Humphrey Bogart) who had a reputation for anti-fascist activism during the late 1930s; lately, however, he’s determined to stay strictly neutral. When a member of the French underground turns up with two exit visas he’s stolen from Vichy authorities, Blaine doesn’t protect him; but he also doesn’t turn over the visas.  Not even to Victor Laszlo (Paul Henreid), a Czech resistance leader who was hoping to buy those very exit visas. 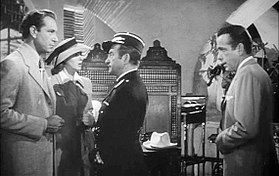 But then Blaine sees that Laszlo’s wife is Ilsa (Ingrid Bergman), and that gets his attention.  For Ilsa is a woman with whom he shared a brief and intense romance in Paris right before its fall; they’d arranged to flee the city together, until Ilsa inexplicably backed out at the last minute.  But now here she was; of all the gin joints in all the world, she had to walk into Rick’s place, right when Rick was holding on to two exit visas.  This all puts Rick in an interesting position; does he give Ilsa and Laszlo the visas?  Does he try to sell them at a high price?  If so, does he even sell them to Ilsa and Laszlo, or to someone else?  Or does he use one to get himself out of Casablanca?  ….And if he does, then who gets the other one?  One of his friends?  A stranger?  Or, maybe even Ilsa?

You no doubt have noticed that I quoted the film already.  The script is spectacularly written, with plenty of quipable and quotable lines that have passed into the general public consciousness, from Blaine’s go-to toast “here’s looking at you, kid,” to the French police captain’s orders after a crime that his officers should “round up the usual suspects” to plenty of others you’re probably already saying to yourself.  (Although, for the record: “Play it again, Sam” is actually a famous mis-quotation.)  But a script is more than just witty lines; there also needs to be a well-drawn plot and characters that act honestly and genuinely.  And happily, this script delivers.  You learn exactly why Ilsa fell in love with Rick in Paris, and exactly why she left him there.  And why Rick has become so cynical.  And that maybe he isn’t quite so cynical after all.  Even the minor characters have genuine arcs; the police captain Louis Renault (Claude Rains) sometimes seems to half-ass his job, but there’s a suggestion that may be on purpose.  …Or maybe it isn’t.  Hard to say. 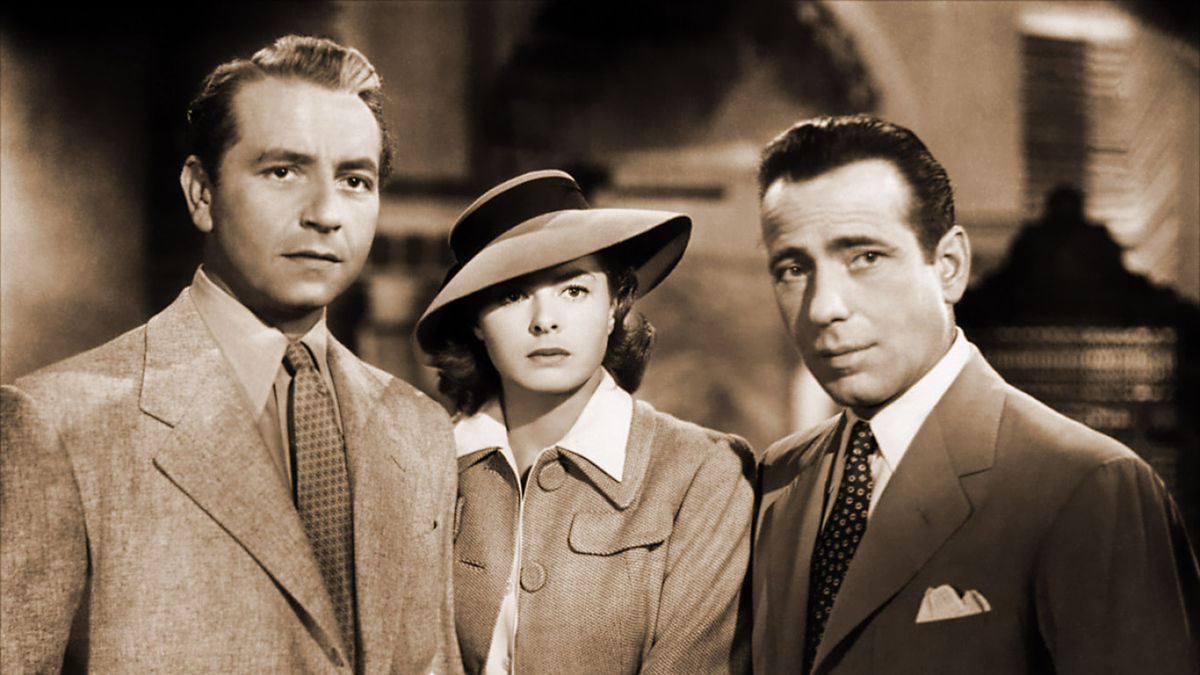 Of course, the performances add to the picture as well.  Long ago I read that Ronald Reagan was at one point considered for the role of Rick Blaine, and that feels so wrong; Bogart is perfect for this, delivering most of his lines with a world-weary cynicism of the sort that you suspect masks some deep hurt.  There are subtle moments throughout where the mask slips a bit and Rick does some subtle good deed, but mostly he’s a deadpan sideline snarker.  Bergman, for her part, is luminously lovely as Ilsa; but fortunately has more to do aside from just be lovely.  There are some daring risks she takes to secure her husband’s safety; but there are also moments when you can tell, just by watching her look at either Blaine or Laszlo, precisely what she thinks of each of them.  And that’s just Bogart and Bergman; everyone else in the film, even the extras, are bringing their A-game.

This is especially so in a scene that is probably the film’s most famous.  It’s also the film’s most blatantly political scene, one where even Blaine subtly but definitively takes a side.  As Laszlo is meeting with Blaine, urging him to give him the exit visas – and Blaine is stubbornly refusing – suddenly they hear a group of German soldiers start singing a German patriotic song, to the discomfort of many of the other patrons.  After a few seconds of listening in disgust, Laszlo impulsively stalks over to the house band and urges them to start playing “La Marseillaise,” hoping to inspire the crowd to outsing the German soldiers. At first they hesitate – but Rick subtly nods his approval, and the band strikes up.

You’ve seen this scene before.  I know you have.  Even independent of the film, it’s an amazing scene.

There’s an excellent analysis of the Marseillaise scene here, on the blog “Seven Inches Of Your Time”, delving into just what makes it so powerful; it’s a heady blend of character moments as well as a key point in the plot, and plus it also uses one of the most kick-ass national anthems around.  But one aspect of this scene deserves special attention; most of the extras in this scene are actual refugees from occupied France who’d escaped to the United States.  Many of them had barely been in the United States for a year, and many feared that they’d never be able to return – or worse, that France would never be liberated.  “La Marseillaise” was banned in occupied France, and here was a chance to sing it again – and in a scene where they got to out-sing a German anthem.  Reportedly many of the extras were openly weeping between takes.

Even German film scholars agree with the scene’s power.  I mentioned my visit to Berlin’s Museum of Film in an earlier review; while there, I noted that they had a room devoted to the myriad artists from Germany and other Axis-occupied countries who escaped to Hollywood during the Second World War, and how they took work in the Hollywood system and shaped it as a result.  But even though their focus was on German refugees, this clip featuring French refugees was the one they had in the room on a continuous loop.  Officially I’m sure curators would say that it was a good example of a Hollywood studio using refugees in a famous film; but a part of me definitely got the subtext that they were saying “….yeah, we know this makes us look bad, but dammit even we think this scene is amazing.”