It’s strange – when it comes to film adaptations of books, I usually turn up my nose at the idea of using the film as a “cheat” to help you follow the book.  However, this Wuthering Heights adaptation is now the second time I’ve done precisely that (the first was 2012’s Cloud Atlas, which has sadly not made it onto the list).

Like most, I had the book as assigned reading in high school, so I had vague recollections of the plot; dude named Heathcliff, northern English setting, doomed love story, something like that. However, I had great gaps in my memory (whether Emily Bronte’s opaque writing style is at fault, or whether it’s due to my being three decades out of high school, is a judgement call I leave to the reader), and watching this film helped reinforce the story for me: as a boy, the orphan Healthcliff is swept up off the Liverpool streets and adopted by widower Yorkshireman Mr. Earnshaw, who brings him home to his farm on the moors to live with him and his son Hindley and daughter Catherine. 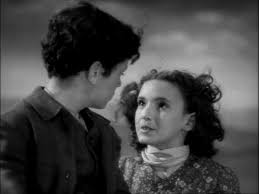 Heathcliff and Catherine bond deeply, but Hindley looks down on the orphan, and when Mr. Earnshaw dies, Hindley demotes Heathcliff from the status of “adopted brother” to “farmhand”, sending him off to sleep in the stable.  Catherine also starts to look down on Heathcliff a little as well, despite herself – she has girlish dreams of marrying wealthy and becoming a genteel lady-of-the-manor, something Heathcliff can’t provide for her. A misunderstanding drives Heathcliff away to seek his fortune and come back to her, but by the time he returns, Catherine has already married the wealthy Edgar Linton and is living the high life.  So Heathcliff instead marries Edgar’s sister and buys the Earnshaw family home instead, thus forcing himself into Catherine’s orbit, to punish her for shunning him.

Now, I’ve spoken before about what a tricky tightrope adapting books to film can be.  It’s nearly impossible to make a 100% faithful adaptation of book-to-film, simply because books and films are two completely different art forms.  One of the big things filmmakers have to wrestle with is time – some bits of books get left out of adaptations simply because the filmmakers don’t want to make a five-hour epic saga.  So this film, like most adaptations, completely omits the half of the book which deals with Heathcliff and Catherine’s children and their relationships, keeping strictly to the story of Heathcliff and Catherine and their doomed affair.  It also greatly simplifies the framing narrative – the whole story in the novel is an “as-told-to” kind of thing, with our narrator hearing the story from Heathcliff’s housemaid over the course of several visits to Wuthering Heights.  But the novel also gets bogged down with the narrator getting sick and going on trips and having his own issues to deal with, all of which ultimately distracted 16-year-old me from following the novel that well.  Here, the narrator’s bit is simply to get snowed in at Wuthering Heights and hear the whole story in one fell swoop, which made the actual story much clearer. 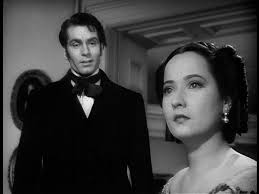 However – some literary critics have pointed out that the tone of the film greatly changes one element of that story. Here, the implication seems to be that fate and bad luck is the biggest wedge between Heathcliff and Catherine; they love each other, but Catherine is too seduced by riches and doesn’t want to live in poverty with Heathcliff, while Heathcliff is a heel for wanting to punish her instead of keeping his distance and letting her be.  Whereas the book implies that it’s much more of a mutual antagonism – Catherine doesn’t marry Edgar Linton because she thinks “oh, Heathcliff ran off, he’s not an option any  more,” it’s more like “he ran off, but he’ll come back one day and I’ll be married already, that’ll teach him”.  The film reforms both characters’ image a lot, turning a story about mutual cruelty into a story about thwarted passion; making it a bit more palatable for modern audiences, perhaps.

It also tacks on a movie-romantic final sequence, wholly invented for the film, depicting a reunion between the ghosts of Catherine and Heathcliff.  This sequence was actually tacked on by producer Samuel Goldwyn; Goldwyn had suggested it to director William Wyler, who hated the idea.  But Goldwyn insisted on adding it in, and even had to call in doubles for stars Laurence Olivier and Merle Oberon, both of whom had since moved on to other projects. 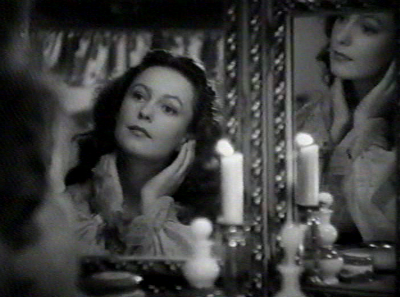 Still, the changes and tweaks seem to have paid off; Wuthering Heights was soundly praised by critics, and scoring eight Oscar nominations that year.  The 1939 Oscars offered some unusually stiff competition, however, with juggernaut films Gone With The Wind and The Wizard of Oz also scoring nominations. Ultimately, its one win was for Cinematography, and even then that may have only been because there were two cinematography categories that year, one for color films and one for black and white films.  I have to say, though, that frequently I was struck by the shots cinematographer Gregg Toland was setting up on the screen; if someone like me is noticing how well things are composed, that’s saying something.