I was unsure what to make of Things To Come. But for the life of me, I can’t tell whether that is my fault, the film’s fault, or…history’s fault.

Written by H.G. Wells – and very very loosely adapted from one of his short stories – Things To Come is a treatise on war, politics, and aspirations to progress, hiding in the middle of a sci-fi story about a generic British city named “Everytown” and the changes wreaked upon it by time and fate. It starts out on Christmas, 1940 – a date four years distant ahead of the film’s release – with the frolic and festivities periodically interrupted by news reports threatening oncoming war.  Two families discuss the news over Christmas dinner; while John, the patriarch of the Cabal family is uneasy, his neighbors the Passworthys think it’ll all blow over.  But a bomber from “The Continent” dropping by just after dinner proves the Passworthys wrong.

The ensuing war drags on for nearly 50 years, and by 1977 Everytown is reduced to a feudal-state village. A mid-war pandemic has shrunk global population to a shadow of its former self, people huddle in the bombed-out ruins of skyscrapers, and a warmongering despot called ‘The Chief” runs things. Infrastructure has collapsed to the point that technology is where it was in the 1700s.  But there are enough people living who remember that things like flight and combustion engines and electricity were possible, and The Chief is convinced they can return to this glory even though he’s a bit unclear how. He’s convinced all he needs is to somehow get some of the antique aircraft mouldering in the town’s airport going again, giving him a military advantage, and he has all but enslaved a couple of the smarter villagers to get them aloft again. 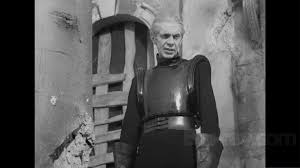 So everyone is surprised when a sleek modern plane lands just outside town one day.  The pilot represents a global organization called “Wings over The World”, devoted to ending the lingering war and devoting mankind’s passions and energy to science and progress.  He’s come to offer them membership.  The Chief wants nothing to do with it, though, and imprisons him.  But he has backup, and they have a nerve gas that pacifies people instead of killing them.

Wings Over The World takes over and spends the next 50 years turning Everytown into a utopian community in a pristine cavernous underground city.  Energy seems cheap and plentiful, everyone is hale and hearty and well-fed; and the city’s scientists, coincidentally lead by John Cabal’s grandson, are now turning their attentions towards space exploration.  But just as they’re nearly ready for a first test of their “space gun”, a local artist holds an anti-science rally, arguing that progress is moving “too fast”.  The rally becomes a mob bent on destroying the space gun, and Cabal and his fellows decide to launch the untested gun; Cabal’s own daughter volunteers to join its crew.  Cabal and his team set off for the space gun, hoping desperately to beat the mob to the launch pad…

So, here’s the thing. As inventive as that story is, it was bloody hard for me to follow – because I couldn’t keep all the characters straight.  The characters aren’t fleshed out that well – instead of presenting them as people, the script falls into the trap of using them as mouthpieces for Wells’ views on science and progress.  There are a couple small human moments – Cabal and his wife hover by their sleeping children in one scene, discussing their fears for the future. But most of the characters’ lines are more like aspirational platitudes about Progress Reaching Beyond Our Grasp and such.  Even more confusingly, some of the actors are double-cast, and I wasn’t clear whether it was for reasons of economy or continuity.  The 1977 ambassador from Wings Over the World has a connection to Everytown, and not only did I not know that from the film, I didn’t even know it until reading the cast list on IMDB just now.

The place where the filmmakers decided to blow their budget is on the look of the film. Wells was put off by the future depicted in Metropolis, with a downtrodden underclass and evil robots, and wanted to present a brighter, cleaner future, emphasizing science’s boons as opposed to its burdens.  So the 1977 Everytown looks entirely constructed of rubble and everyone wears rags, while 2036 Everytown looks like a luxury hotel lobby and everyone wears jumpsuits made of white silk and mylar.  It’s a look that was adopted as “futuristic” by many subsequent films.

In fact, that was one of the details that made watching this from 2018 kind of unique.  Many of the films that adopted that “futuristic” look were….of diminished quality, shall we say, so what looked like “clean bright future” in 1936 now reads to me like “B-Movie”.  The “future outfits” in particular resemble those from a film pilloried by the show Mystery Science Theater 3000, and some of the show’s quips came to mind while I watched (“Put your faith in Blast Hardcheese!”).  The current depiction of “the future” has become far grittier, as well – compare the bright cavernous luxury of Everytown with the future depicted in Blade Runner, for instance, where everything is crowded, dark, and inexplicably damp.  We have been trained to think of the future as a dystopia in recent years, making views of a future utopia feel naïve.

The very dates also distracted me as well.  I was especially struck by the film’s guess that 1940 would be the onset of war, to the point that I just looked up British military strategy from 1936 to see if they anticipated an outbreak.  Turns out they didn’t – but Wells was personally convinced that war was on the horizon, and just made a guess as to when.   The prediction of 50 years of war was fortunately a miss; but I’m already hearing some of the 2036 anti-intellectualism arguments today.

Then again, watching any kind of “vision of the future” from the time depicted as that future leads one to unconsciously keep a scorecard, ticking off a checklist of “what they got wrong”.  What they got right – and that they got anything right at all – is possibly more impressive.