Earlier I said that I had developed a fondness for Rene Clair. But I’ve realized that maybe I’m just charmed by 1930s French film in general; breezy plots, quirky gimmicks, a lighthearted tone, and an overall…er, je ne sais quoi.

The story of The Story Of A Cheat is a lighthearted autobiography, related by our-middle-aged hero as he sits in a café “writing his memoirs”.  We never learn his name – he simply calls himself “A Cheat”, based on a lifelong belief that in his case, dishonesty actually paid off better than morality. He begins with a childhood anecdote, in which he stole some pocket change out of the till at his family’s grocery store and was sent to bed without supper; however, the mushrooms his family served for dinner that night were poisonous, and everyone else in the family was killed.  So, he claims, theft spared him his life.

Our hero bounces back from this early misfortune, cavorting through a series of hotel service jobs as a bellhop or elevator operator – all the while, he claims, he is also spying on guests, thwarting an assassination and losing his virginity to a wealthy Countess.  He is drafted into the French Army during the First World War – and almost immediately wounded and sent to a hospital, and then forgotten about due to a bureaucratic error, so he spends the war reading a lot.  He tries his hand at being a croupier, but gets lured into robbing hotel safes and cheating at cards instead.  When he tries to go legit again, he takes up professional gambling instead. 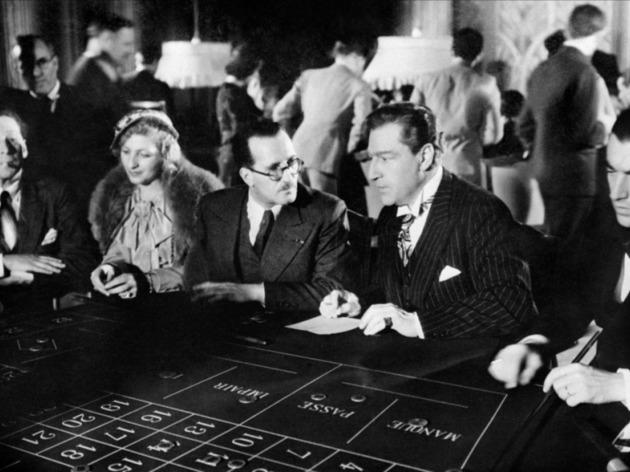 A lot of that tale sounds dour and Dickensian; but somehow it ends up feeling more like a titillating romp.  The bellhop sequences even reminded me of The Grand Budapest Hotel, all mannered dialogue and eager young men tending to fussy society matrons.  Everything is also seen through the rose-hued glass of memory; our hero’s fortunes may have gone up and down, he may have won and lost millions, but – our present-day hero is a distinguished-looking fellow, with enough money to dress in a suit and enjoy lingering over a glass of beer at a café while he pens his story.  (…He has also found a more stable job at this point – which he reveals at the very end, in a shaggy-dog-story twist I won’t share here.) Our hero is not lamenting his misfortune – he’s reveling in the fact that he got away with a life of dishonesty more or less intact.

The “memoir” structure turns the film into an interesting hybrid of “silent” and “talkie”.  The only scenes with any dialogue are in the present, where occasionally we see our hero telling a portion of his story to the waiter or another patron of the café (think like how we saw Forrest Gump on the park bench once in a while).  Everything else is a narrated flashback, with other actors silently going about their business as our narrator tells his tale.  This allows for some clever visual gags as well; my favorite is probably when the hero starts to discuss the Countess.  But he never flat-out says what happens during their first meeting – instead, he coyly says that “I went to her room, and then for the first time…..” and trails off, letting the film cut in an image of a pair of lovebirds billing and cooing for a few seconds before he resumes the story.

Even more impressive – for me anyway – is that the film was produced, written, and directed by our hero, played by a jack-of-all-trades named Sacha Guitry (the film was based on his only novel, to boot). I find it a hard to trust a film where the lead is also the director and producer and sole screenwriter – with only one person responsible for all the creative decisions, it’s a little too easy for the film to collapse into being a big ego-gratification thing.  But perhaps Guitry keeping himself off camera (at least physically) for most of the film somehow keeps things in check.

Even the one quirky ego indulgence he has was charming – instead of credits, Guitry has a brief scene set on a film soundstage, during which he introduces each of the actors as they “arrive for filming for the day” and are going about their business (“and at the makeup table is Marguerite Moreno, who will be playing a Countess for us….and where is Serge?  Ah, there’s Serge Grave, taking a nap; he will be our hero as a young boy.  You can go back to sleep, Serge….”) It’s borderline twee and felt a shade too long, but made enough of an impression at the time that Orson Welles borrowed the concept of narration-as-credits for Magnificent Ambersons. Somehow, though, it feels better when delivered with a whimsical Gallic touch.