By now there is no need for me to acquaint the reader with the plot of this film – this is one of a long, long line of adaptations of the Robin Hood tales, which have seen adaptations both gritty and fanciful, period and contemporary; it has been given serious treatment by Kevin Reynolds and Ridley Scott, spoof treatment by Mel Brooks and Terry Gilliam, an animated treatment by Mel Blanc and Disney, and even a burlesque treatment on the British pantomime circuit.  And that’s not even getting into the times that TV shows like Star Trek: Next Generation or Doctor Who have done a “Robin Hood episode”.  It’s Robin Hood.  We all know the drill, and I would bet that a number of you are still giggling over the memory of Worf growling “Sir, I am not a Merry Man!” after I mentioned that Star Trek episode. 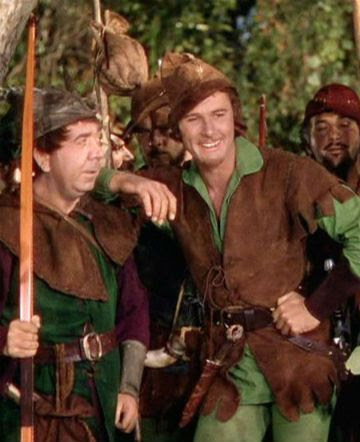 ….Which brings me to my biggest complaint about this film, actually.  I know that Robin Hood’s band goes by the name “Merry Men”, but ultimately everyone was so merry in this film it got on my damn nerves.  Errol Flynn – who will be our Sir Robin of Locksley for this evening – seems to have a perpetual smirk on his face no matter how dire the circumstances. Even in an early scene when he’s in Prince John’s castle, he notices the guards are locking him in and preparing to jump him, but doesn’t look scared or troubled at all; instead, it looks more like he’s started working on an unusually tricky crossword puzzle.  He recruits Little John (Alan Hale, Sr.) and Friar Tuck (Eugene Pallette) through lively sparring matches, which both end with everyone throwing back their heads for a hearty laugh before a chummy handshake and a trip to a tavern for some ale.  Ambushing a tax collectors’ haul is cause enough for a huge banquet scene complete with Morris dancers, lute players, roast pigs on spits and crowds of people clanking tankards – basically anything you’ve seen at a suburban Renaissance Faire. 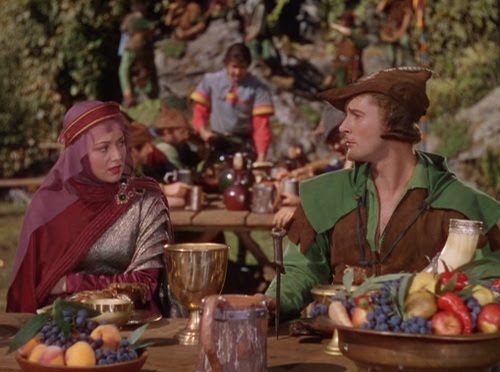 And that hearty jollity killed a lot of the dramatic tension for me.  Not that I need things to be historically accurate or grim all the time – the story of Robin Hood is essentially a fairy tale, and sometimes things get fanciful in fairy tales.  But at least you should feel like there are some things at stake, and that your hero is up against an evenly-matched enemy.  In this version, however, the Sheriff of Nottingham is a milquetoast who chickens out of any potential matchup with Robin, and the real baddy, Sir Guy of Gisbourne (Basil Rathbone), is confined to simply looking menacing as he sits beside Prince John for most of the film.  Anytime we see anyone getting into any real danger, they get out of it within about five minutes, so when things get a wee bit dicey for Maid Marian (Olivia de Haviland) towards the end, we just shrug, thinking that we already know that Robin’s going to save her, so eh.  This isn’t a story, so much as it’s an excuse to watch Robin Hood be awesome.

But that brings me to the thing I thought this film did do well.

The last time we saw Basil Rathbone and Errol Flynn do a stage fight, they were done in less than five minutes and it was a little dull.  But this was more like it.  I got a bit of a crash course in stage combat in college, thanks to a friend who was a genius at combat choreography and performance (I’ll be referencing him in a couple later reviews, since he had some seriously intense opinions about the combat in both Gladiator and Princess Bride).  My friend’s biggest criteria for a fight scene was always whether it felt like the moves in the fight flowed organically from what was happening.  People who just bashed swords at each other didn’t impress him; there has to be a reason why you’re bashing swords at each other, he pointed out, be it “I’m seeking revenge against my father’s murderer” to “I’m sizing this guy’s fight skills up” to “I’m trying to get the hell out of this castle”.  Every fight had to have a story to it, he said.  And in this film, the story of each fight was absolutely clear.  It may have been telegraphed who was going to win each time, but the story of the fight itself was clear.

My friend also liked it when fight scenes worked in other features of the room – if you’re trying to get away from an attacker, anything that will help you do that, you’re gonna use.  So during that early scene when Robin is ambushed by Prince John’s men, and he flips backward in his chair, does a sommersault under it and then picks up the chair to use as a shield, I was there for it.  In a later fight, someone throws an entire candelabra at Robin Hood to trap him under it – but Robin grabs one of the candles and throws it back at his attacker, distracting him long enough to get back on his own feet.  And it’s not just Robin – other characters’ fight moves are choregraphed well, like a little guy who spends an entire fight huddled up in the rafters with a club so he can yank off people’s helmets and bonk them on the noggin.  People in the film are fighting like they’d really be fighting, and in and of itself that was gripping.