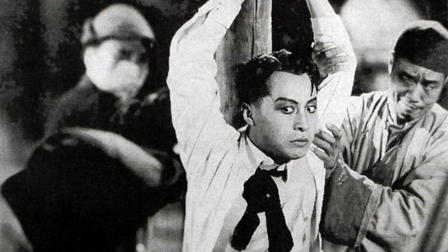 Song At Midnight is often called “the first Chinese horror film”, and most reviews compare it to Phantom Of The Opera. But it’s only loosely based on that earlier work.  There’s a disfigured man lurking in the attic of an opera house, yes, but he’s not interested in kidnapping a lovely young lady to be his protgee and mistress – for this fellow, Song Danping, has already given away his heart to Li Xiaoxia, the daughter of a local official.   And she loves him back – in fact, they were a loving couple ten years prior to the film, when Song was an opera star in the city where they live.  However, another local fellow named Tang Jun was a rival for Li’s affections.  He first tried turning Li’s father against Song – but when that didn’t work, Tang waited outside the stage door of the opera one night with a bottle full of acid, hurling it at Song’s face when he emerged.  The acid attack left Song disfigured, and out of shame he went into hiding in the opera house’s attic, sending a message to Li that he had died of his wounds to spare her. The shock at this news drove Li mad – which also turned Tang off, so he skipped town.  Heartbroken for Li, Song has been sneaking to her window each night and serenading her from the shadows, hoping to give her some comfort.

That’s all backstory, though, that only comes out midway through the film. We actually begin the movie ten years later, when a touring theater company shows up for its booking in the dilapidated opera house.  The troupe’s young romantic lead, Sun Xiao-au, is running through one of the big numbers alone in the space when Song starts singing along, subtly coaching him through the tricky parts.  Sun discovers Song after a brief investigation and remembers Song from his early glory days – so he’s a bit of a fanboy.  Song is equally impressed with Sun’s singing – and when he sees that Sun is also easy on the eyes, he tells Sun the whole story of him and Li and the acid attack, and then suggests that Sun pay him back by visiting Li that night, posing as Song, and giving her one last embrace and urging her to move on with her life.  Sun is a little weirded out, but goes along with it, and Song is ready to withdraw into his attic for good – until he learns that Tang is also back in town, and realizes he also has a chance for revenge.

The structure of the film made this a tiny bit hard to grasp at first.  The very first thing we see is one of Song’s serenades to Li; a four-minute sequence which jumps back and forth between shots of Song’s shadow hovering against a wall, and shots of Li standing on a balcony and listening.  It makes sense in time, but right at the first you’re left scratching your head a bit.  There’s also a political-revolution subplot that honestly feels a bit tacked on.

One arresting sequence comes when Song is recounting his story, and we see the aftermath of the acid attack.  Song fortunately had friends to look after him as he recovered, and spent several weeks with face and hands swathed in bandages as his friends rally around him and buck him up. But one day he demanded the bandages off now so he would know how bad the damage was, and his friends grudgingly agreed.  The reveal of his new face is as shocking a scene as was Lon Chaney’s face in the silent-era Phantom – props to the makeup department, seriously – but in this case, it’s a poignant moment, since instead of feeling horror and revulsion, his friends also feel sorrow and pity on his behalf.  After their initial recoil, they rally back to his side, promising bring him food and companionship in his self-imposed exile.  This Chinese Phantom is heartbroken, but not wholly abandoned by the human race.