And thus, we come to the first full-length Disney film.

I was a little hyper-focused on my reaction while watching this film, since my relationship with the House of Mouse has been a bit….complex.  I saw a lot of the old classic movies as a kid, and we made three family pilgrimages to Orlando by the time I was ten.  Disney had been producing full-length movies for four decades by the time I came along, and their works were often the go-to for “entertainment for kids” – Snow White is the first film I have any memory of seeing, natch (although those memories are extremely hazy; I remember being in a car at a drive-in, but only remember vague shapes on the distant screen).

However, I was a child in the 70s, when Walt Disney’s company was facing stiff competition from Jim Henson and Charles Schulz; and compared to Kermit and Snoopy, some of Disney’s stuff felt a little…creaky.  There was also a gender-consciousness in my grade school, thanks to the burgeoning women’s-lib movement and Marlo Thomas’ Free To Be You And Me kids’ album.   So there really wasn’t the same kind of “Disney Princess” thing going on when I was little – instead, I was more into Winnie The Pooh and Lady and The Tramp.

Over the past few decades, as I’ve grown from being a precocious kid with a tomboy streak to being an opinionated childless feminist, that indifference towards the princesses has verged on outright aversion, to which I’ve added frustration at how many of the old folktales were cleaned up for the Disney films (the actual story of “Sleeping Beauty” was reaaaaaally different, and that movie would be rated R).  I also have known a couple people who’ve worked for Disney studios and their perspective has….well, let’s just say it’s colored my own.  So – here I was, a middle-aged feminist with a bit of a Disney grudge and an orthodoxical love of support material.  What was I going to think of this thing?

Don’t get me wrong, there are definite problems.  As a character, Snow White is pretty dull; a sweet and meek helpmeet who wants a husband.  The first thing she does when she walks into the dwarfs’ cottage and sees how unkempt it is, is start cleaning it.  Hell, the first thing we see her doing is scrubbing the floor at her castle and singing about her prince coming someday.  Speaking of the Prince, he’s even less interesting – I don’t think the Prince has any speaking lines at all, just a single song he serenades Snow White with, pledging eternal devotion after seeing her precisely one time.  Other Disney princesses at least get to talk with their Prince Charmings at some point in their own films.

But that may be a function of the story itself; “escape the Queen and find the prince” is Snow White’s only motivation in the original story too. Disney’s studios was going to have to pad that story out anyway to make a full-length film. Tweaking Snow White’s character may have been a little too advanced for the 1930s.

So that left the option of fleshing out Snow White’s world instead – and this is where things really shine. Today the trope of the princess surrounded by frolicking woodland creatures is something we roll our eyes at – but it was those very frolicking creatures that caught my eye again and again, because there was a stunning attention to detail.  The rabbits all move like rabbits; pheasants all move like pheasants.  Quail move like real quail.  Mice, chipmunks, deer, turtles, finches – all are unique creatures that are individually animated in true-to-life ways (or as close as you can get, since I doubt real squirrels would help dust chairs).  Even a housefly has character and personality, turning up again and again to plague the dwarves in turn before falling asleep on Sleepy’s nose, complete with little housefly snores.

The dwarves are who the average person remembers best.  Disney was the one to give them personalities – the original Grimm folktale doesn’t give them names or characterization, and fleshing them out would go a long way towards building out the story.  There was even an early draft of the script that told the story from the dwarves’ perspective entirely.  But Disney reverted to Snow White being the star again and giving the dwarves unique characters, choosing temperaments and names from a pool of fifty possible writers’ room suggestions (among the rejected names: “Deafy”, “Wheezy”, “Baldy”, “Tubby”, and “Burpy”).  Over the course of the movie, the dwarves still do more – they have more songs, they have more scenes, they generally just do more stuff.  At times I even felt that they were doing a little too much – there’s a scene when Snow White is inspecting the cleanliness of each one’s hands before dinner, and the scene shows each and every one individually showing his hands for inspection.  Kids probably would dig that, but this particular grumpy adult wanted them to get on with it… 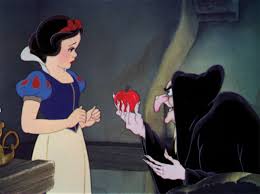 Speaking of that grumpy adult, I was surprised by some moments of macabre humor.  As the wicked Queen is heading out to poison Snow White, she passes through the castle dungeon and comes across a cell; a human skeleton lies just inside, its arm stretched out through the bars towards a pitcher sitting just out of reach.  The Queen pauses when she sees this, and cackles, “Oh, are you thirsty?  Have some water!” before gleefully kicking the pitcher at the skeleton, knocking it to pieces.  ….It’s not Tarantino-caliber, but you have to admit – that’s dark.

Later Disney films improve on the Princess Role a bit.  The very next aminated Disney work was 1940’s Pinocchio, and it was another ten years before Cinderella – which gives its princess lead a little more of a presence.  But the seeds of several other Disney works, from Bambi to Fantasia to Sleeping Beauty, are all here if you just know where to look.