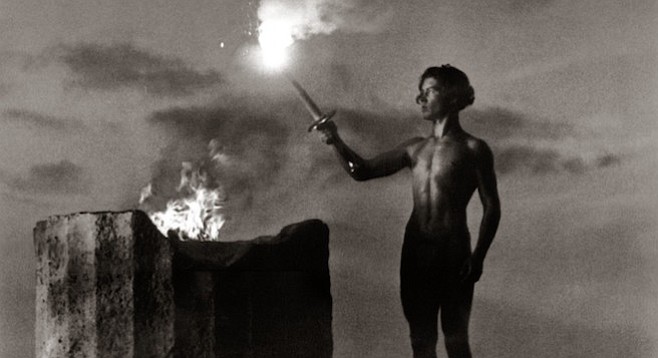 So, here’s the thing.  I’m not really a sports person.  Never have been, never will be.  I respect athletes, mind, it’s just that watching them do their job is not something I would ever really do.  So that was a big strike I had in mind against Leni Riefenstahl’s Olympia – on top of the already-existing and inescapable fact that Olympia was about the 1936 Olympics in Berlin, and so I was bound to see lots of shots of swastikas and people Heiling Hitler, something I’ve really had quite enough of as of late, thanks very much.  So I was surprised to discover that I….kind of liked this.

Part of what seduced me may have been through a simple quirk of fate.  The full four-hour Olympia is split into two parts at most screenings and on most streaming services – and for reasons I cannot ascertain, the print of the first part I watched did not have subtitles. I even tried turning on the closed-captioning, but all they had for the frequent sportscaster commentary was the phrase “man speaking German” in parentheses.  So I switched it right back off and just studied the visuals; maybe that was all I needed.  And it was – Riefenstahl was an amazingly innovative visual artist, including such a broad range of detail that I was getting a narrative simply out of what I was seeing.

Mind you, Riefenstahl’s techniques aren’t anything you haven’t seen in your average Sunday night football or 21st-Century Olympics broadcast – closeups of the athletes preparing for action, shots of the screaming crowd, lots of different angles on the action from all perspectives, slow-motion plays for the really killer stuff.  But that’s exactly it – Riefenstahl was the one who came up with all that.  A year ago I was in Berlin, and visited their Deutsche Kinemathek museum for film and television; there’s a whole room devoted just to this one movie, with a scale model of the Berlin Olympic Stadium showing you with pinpoint lights precisely where Riefenstahl had the camera set up for specific shots; from what I can recall, there were cameras all over the dang place, from the ones in the house right next to the Yutz In Charge to the ones down on the oval, up in the rafters, down in a dugout-y thing….they were everywhere.

But having a lot of cameras isn’t all there is to it.  Riefenstahl was also capturing interesting things with those cameras – there were lots of shots of different nations’ cheering sections, cheering on athletes from all over the world.  And she matched the athlete to their nation’s fans – when a Japanese pole vaulter had a particularly good run, we got a shot of a big cluster of Japanese fans all cheering and waving.  A tight race between an Italian and a French runner saw both of their fans as well.   There was a whole drama involving an American shotput guy and some dudes in straw hats in the audience; the shotput guy kept falling short before finally making a good throw, and the dudes in the straw hats kept getting more and more despondent with each of his misses before Riefenstahl showed them losing their minds at his success.

Other bits seemed strangely intimate.  For one late-night pole-vaulting sequence, it was too dark to show the surrounding crowds; in response, it feels like Riefenstahl embraced that, turning down the sound on the crowd completely so that all you hear is each athlete’s running footsteps in the dirt and their pants of breath.  And instead of the crowds watching them, she would cut to closeups of the other athletes watching them instead, peering at their rivals with rapt attention.  In those moments, the politics of the Berlin Olympiad are stripped away – it feels more like a late-night casual pick-up match between a couple of neighboring colleges or something.

This was the Olympics where American runner Jesse Owens showed up Hitler’s race prejudice but good, so I was curious to see how his races were treated.  And – I’m happy to say that Riefenstahl shows him in a favorable light.  I’m even happier to report, however, that he was not the only non-German athlete that Riefenstahl made look good.  Every athlete who had a notable achievement – regardless what country they were from – gets celebrated by this film, with lots of beauty shots of their performance, closeups of their fans, and a shot of their medal ceremony.  There are even two instances when an American gold medalist’s face is superimposed over a shot of the fluttering Stars and Stripes, as “The Star Spangled Banner” echoes through the Olympic Stadium.  But the same happens with the Japanese athletes listening to the “Kimiyago” or the French athletes with the tricoleur and “La Marsellaise”.

There’s even some possibly-unintentional comedy, in a sequence covering an equestrian event; about eight riders are following a complicated cross-country track, with lots of hurdles and obstacles; one such hurdle was set up right before a stream, such that horse and rider got a splashdown on landing.  Easily half the riders got thrown off into the stream, or their horses would want to stop and shake off a bit.  Even funnier was a sequence at another obstacle with two hurdles on either side of a ditch; horses had to jump the first hurdle, land on a steep slope on the other side, climb down to the bottom and then back up and over the second hurdle.  One rider’s horse took one look at that setup and stopped dead, refusing to jump.  Three times the rider tried to circle it back for another attempt, but each time the horse said “nope” and stopped short.  The commentator drily noted that the rider was eliminated from the match as a result, but honestly, I’m with the horse.

For the second half of the film, Riefenstahl isn’t even showcasing the competitive angle all that much.  The second half is set up as more of a celebration of the universality and commonality of sport, and the beauty of the athletes.   For the competitive sailing races, there’s not much commentary on the races themselves; instead, there are beautiful shots of a fleet of boats, sails all unfurled, darting through the sea on a gorgeous day.  A sequence on diving towards the end doesn’t just abandon the commentary towards the end, it also abandons any effort to distinguish one diver from another – all we see is a series of beautiful men soaring gracefully through the air in perfectly precise arcs, or curling themselves up gracefully into flips and spins, then splashing effortlessly into water.  Once or twice, Riefenstahl even reverses the film, tracing the diver’s flight backwards just to show you how it looks that way.  Other times she even shows you the divers’ path from underwater.

Riefenstahl’s association with the Third Reich unquestionably makes her a controversial figure, and during the 1930s she reported having a favorable opinion of Adolf Hitler.  And yet I can’t shake the notion that someone who really bought into the Nazi party line wouldn’t have treated other country’s athletes as sensitively and favorably as she did with this film.