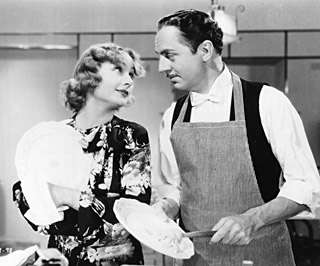 My Man Godfrey certainly looks pretty, and it has some sharp socio-economic commentary.  I’m afraid that some of the plot had me baffled, though.

William Powell is the “Godfrey” of the title.  We first meet him in a Hooverville overlooking the East River, when his peace is disturbed by a group of spoiled socialites dressed to the nines – sisters Cornelia (Gail Patrick) and Irene (Carole Lombard), with Cornelia’s boyfriend in tow.  The sisters are competing against each other in a fundraising scavenger hunt, and one of the items on the list is “a forgotten man” such as himself.  Cornelia charges up to Godfrey, offering him five dollars to be her bum-for-hire. Godfrey is of course offended and tells her so.  As Cornelia flees, Irene spares a moment to congratulate him for sticking up for himself.  She also confesses that she’s glad her stuck-up sister got her comeuppance.  Godfrey spontaneously offers to be Irene’s bum-for-hire instead; but when they arrive, Godfrey waits until Irene’s been granted her points, then tells off the entire crowd before stalking towards the door.  Instead of taking offense, the kindhearted Irene offers Godfrey a job by way of apology. 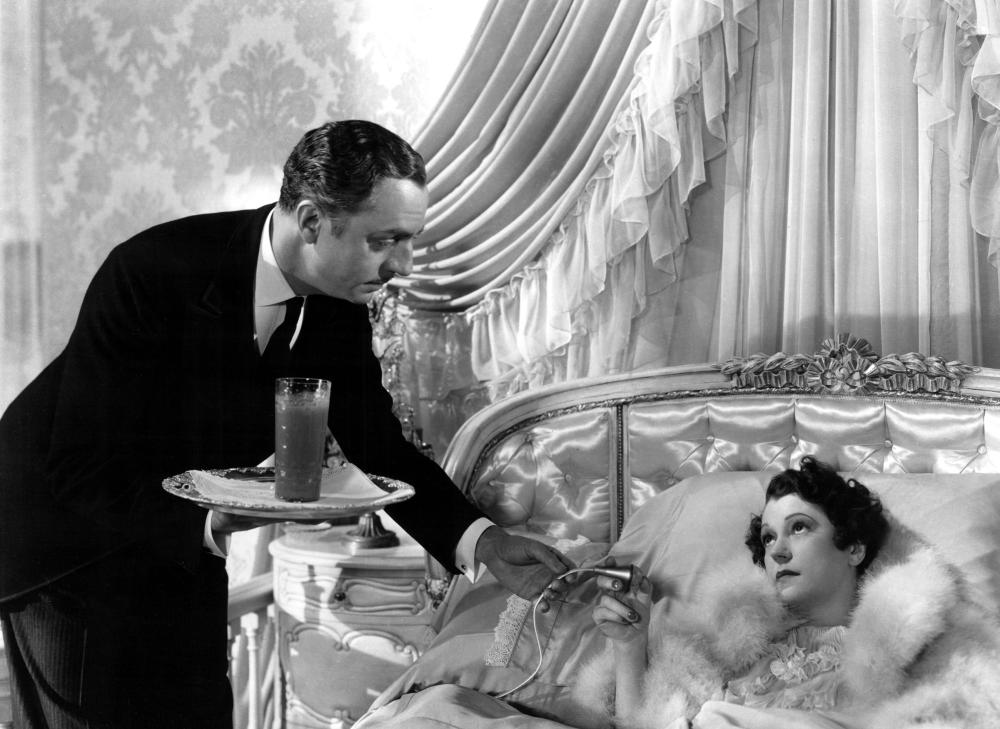 Thus does Godfrey find himself catering to the Bullock family – Cornelia and Irene, their parents Alexander and Angelica, and Carlo, whom Angelica calls her “protégé” but whose actual role is undefined.  Long-suffering maid Molly warns Godfrey on his first day that he won’t last long – but not because the family is strict.  On the contrary – the family is bonkers, and most of the Bullocks’ butlers end up quitting.  But Godfrey needs his job too much, and sticks things out – standing firm and unruffled in the face of some highly dysfunctional hijinks.

The sisters come to single him out for two very different types of special attention. Cornelia, still smarting from Godfrey’s snubs, embarks on a campaign to drive him out. Irene’s affections run in the opposite direction – she starts to fall in love with him.  Godfrey walks the tightrope between them, hanging on to his position despite them both; he’s had a troubled past, and his job with the Bullocks may be exactly the path to reinvention he was looking for…

I liked the social commentary – there are a few times when the Bullocks’ exploitative treatment of Godfrey, and others, gets rightly called out; Cornelia gets her comeuppance a few times in particular.  Godfrey’s backstory is not implausible, and even the other folks in the Hooverville are treated sympathetically, even if they do end up with a bit of a fairytale ending.  But everyone in the film more or less gets the ending that they deserve: the Bullocks collectively tone down the crazy, Cornelia ultimately Learns A Lesson, pushover Alexander finally stands up to Angelica about Carlo is, and Irene wins her heart’s desire – and learns how to calm down and take charge in attaining it.

Incidentally, the actors enjoyed a happy outcome as well.  Carole Lombard hadn’t even been considered for her part at first – but William Powell insisted on hiring her as a condition of his own involvement.  He and Lombard had been briefly married three years previously; however, while divorced, they were on good terms, and got on well on set.  This was the year that “Best Supporting” acting categories were introduced at the Academy Awards, and My Man Godfrey enjoyed a nomination sweep of all four categories – Lombard and Powell for Actress and Actor, Alice Brady for her supporting role as Angelica, and Mischa Auer as Carlo.  They didn’t win, mind you, but like they say, it’s an honor to be nominated. 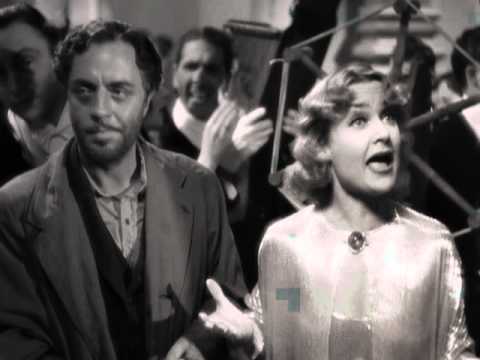 I’m saying a lot about the acting.  And that’s because despite that acclaim, it’s a part of Powell’s own performance, up against Lombard specifically, that struck a false note with me.  Irene got on my nerves a little, but that’s more a function of the character than the actress; Lombard is just fine as the ditzy Irene, and it’s obvious her Irene is smitten with Godfrey.  As for Powell, his Godfrey holds Irene at arms’ length – something you would expect of a butler.  But towards the very end, the script implies there’s a different reason for Godfrey’s distancing himself.  And I do mean “the script” says this – because for the life of me, I cannot see anything in Powell’s performance to suggest that particular nuance. And thus at the very end, when Irene does something that I’m sure I’m meant to assume leaves Godfrey surprised but happy, I was left feeling like he was being exploited all over again.

I may watch this again at some point – there may be notes in Powell’s performance I missed first time around.