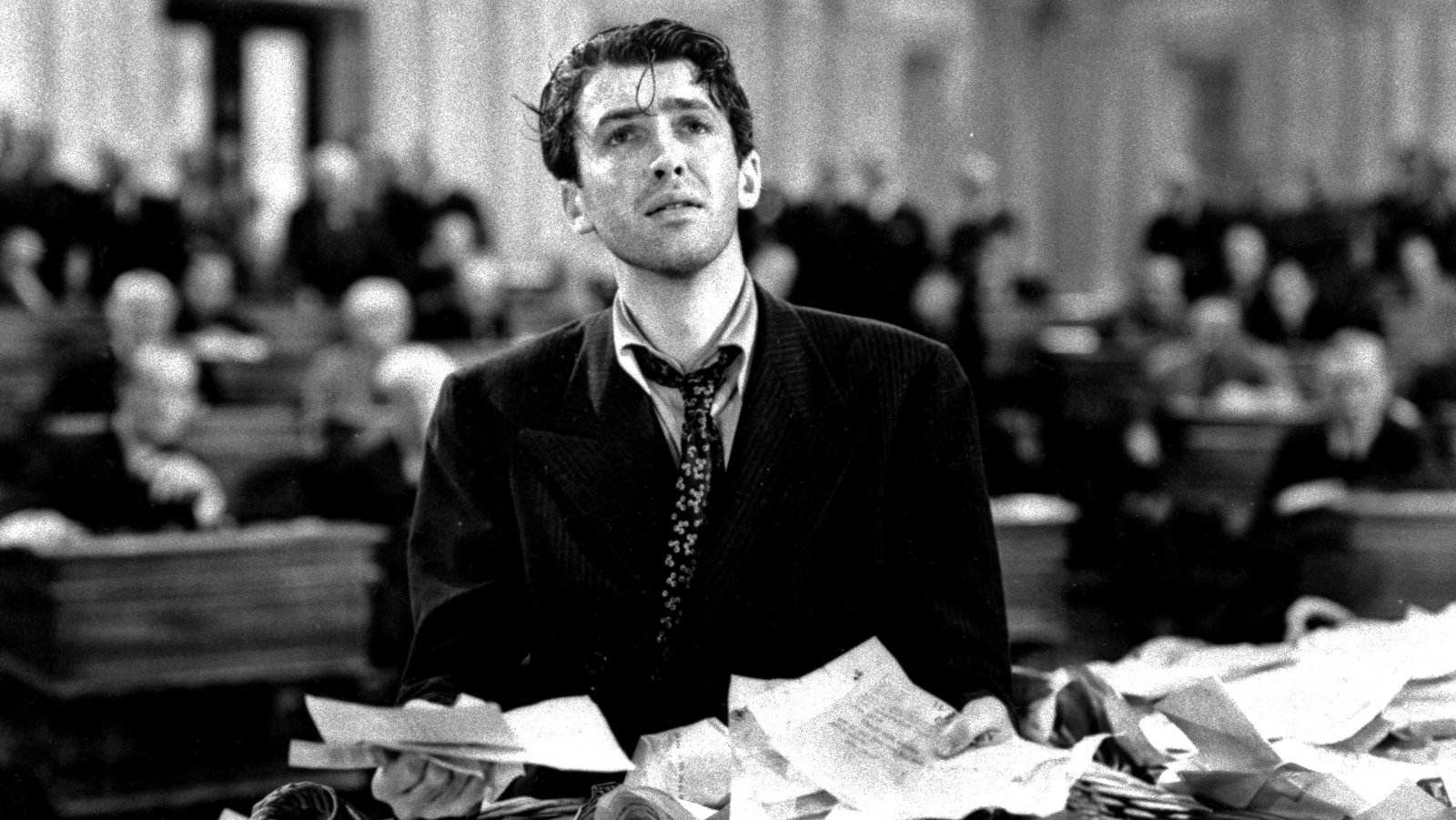 I really wonder what it would have been like to see Mr. Smith Goes to Washington at a different time.

Jimmy Stewart is Jefferson Smith, a starry-eyed political naïf appointed to replace his state’s recently-deceased Senator.  Smith wasn’t the first choice – the people had their own preferred candidate, but Jim Taylor, a local business tycoon with deep political influence, also had his own choice. Caught in the middle, Governor Herbert Hooper (Guy Kibbee) agonizes over the choice until his young sons suggest Smith as an option; he’s the leader and organizer of their boys’ club.  Hooper, desperate to be done with the choice, nominates Smith – the public seems to like him, and Hooper assures Taylor that Smith’s inexperience will make him easy to manipulate.  Smith is summarily shipped to Washington, where an office and secretary Clarissa Saunders (Jean Arthur) await.  Senior senator Joe Paine (Claude Rains), a longtime family friend of the Smiths, offers to shepherd Smith through his stint in the Senate – but Paine is secretly in league with Taylor, and is really hoping to distract Smith from doing much. 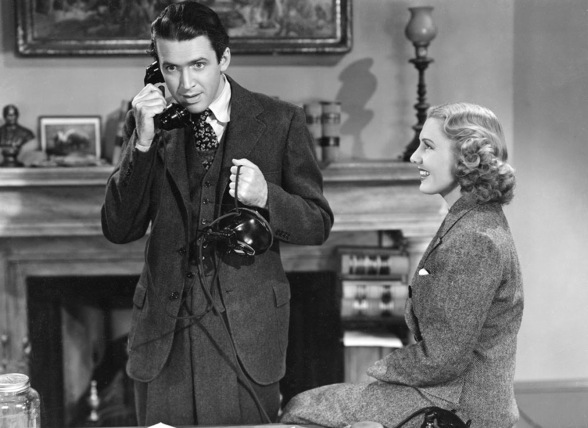 When the eager Smith begs Paine to let him do some real legislative work, Paine suggests he draw up a simple bill for something and try to pass it.  Something small, like getting funding for an infrastructure project back in their state.  Turns out Smith has had several ideas about starting a boys’ camp back home – one open to all boys throughout the country, with scholarships to help fund the less-wealthy campers, designed to teach them about civic duty and good citizenship along with the usual hiking and canoeing and outdoorsy fun.  He pulls an all-nighter with Saunders to draft the bill, but just before he presents it, Paine hears that the proposed camp is located right where he and Taylor have been getting ready to build a dam – after having secretly bought up all the surrounding land so the Eminent Domain payments make them both rich.  In a desperate bid to save the dam, Taylor orders Paine to frame Smith for corruption instead – interrupting Smith’s proposal for the camp to claim that Smith had secretly bought the land for the campsite.  The ethics committee investigates Smith’s case and rules against him – but Smith seizes the Senate floor in a filibuster in a desperate attempt to plead his case, and in the hope that decency will win the day.

Stories about a civic idealist learning about the corruption within government are almost a genre all their own by now, usually ending either with their simple common-sense winning out, or with their ambition leading them to betray their ideals (then getting punished for it).  I want to say that they’re almost a uniquely American story, but I’m sure that there are examples of this story in every country with a representative government; power does corrupt, after all.  And there have been stories riffing on this theme for a long time, almost as long as this nation has been alive. 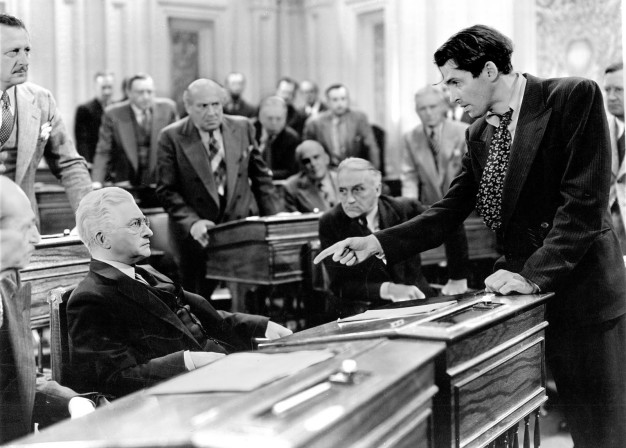 But one big thing that has changed in the years since Mr. Smith is how the public perceives such stories; which, I’d argue, is because of how the public perceives the government itself.  In the 1930s – and the years before and just after – the public shared a similar starry-eyed view of government.  Sure, there were bad apples and corrupt politicians here and there, but many believed those were the exceptions.  The government as a whole was still noble, most people still believed in ideals like decency and fair play and good citizenship, and people who betrayed those ideals would surely get their comeuppance in the end.  Stories about corruption also tended to stay local, as well – people in Topeka never knew about the party political machine in Chicago, for instance.

Then came Watergate – an incidence of corruption which also played out on the national stage.  Now everyone was forced to see that sometimes the bad apples aren’t just local, and sometimes the rot spreads all the way to the top, affecting everyone.  Since then, we’ve still had stories about idealists facing corrupt politicians, but now it’s the idealist who is the exception to the rule.  Instead of being horrified to hear about one senator framing another for graft in order to save his own bill, many of us today might just shrug and say “yeah, it figures.”  Instead of idealizing the government like Smith does (early in the film, he wanders through Washington DC in an enchanted daze visiting all the monuments while Paine waits impatiently to give him his initial briefing), we just wait for their inevitable loss of innocence, and then wait to see how they’re going to recover.

I realize I’m not talking about the film itself all that much.  This is not due to a lack on the film’s part, however; Stewart is his usual charming self, and Jean Arthur is really engaging as the cynical Saunders who is eventually won over by Smith’s faith. (Although I did wish she ended up with more of a titled role in his administration than “secretary”; that could have been a wish before its time, though.)  Stewart was also pretty obsessive about doing this film right – he would wake up at 5 a.m. and drive himself to the set each day, not even wanting to risk a driver getting into a car crash with him and requiring he drop out.  And while filming the filibuster scene, Stewart apparently gargled with an awful-sounding concoction laced with mercury that temporarily inflamed his vocal cords, so that he would sound suitably hoarse.

But that was all overshadowed by my watching this film in a post-Watergate timeline, so Smith’s idealism (and director Frank Capra’s) look like naivete instead of patriotism. It still presents political corruption as a temporary blip that Smith’s good nature defeats, instead of an ever-present danger that all of us, consciously or unconsciously, were pretending didn’t exist.  Some people still believe it’s an anomaly, or worse, they believe that it’s only a recent phenomenon – and they point to films like Mr. Smith Goes To Washington as their “proof”. 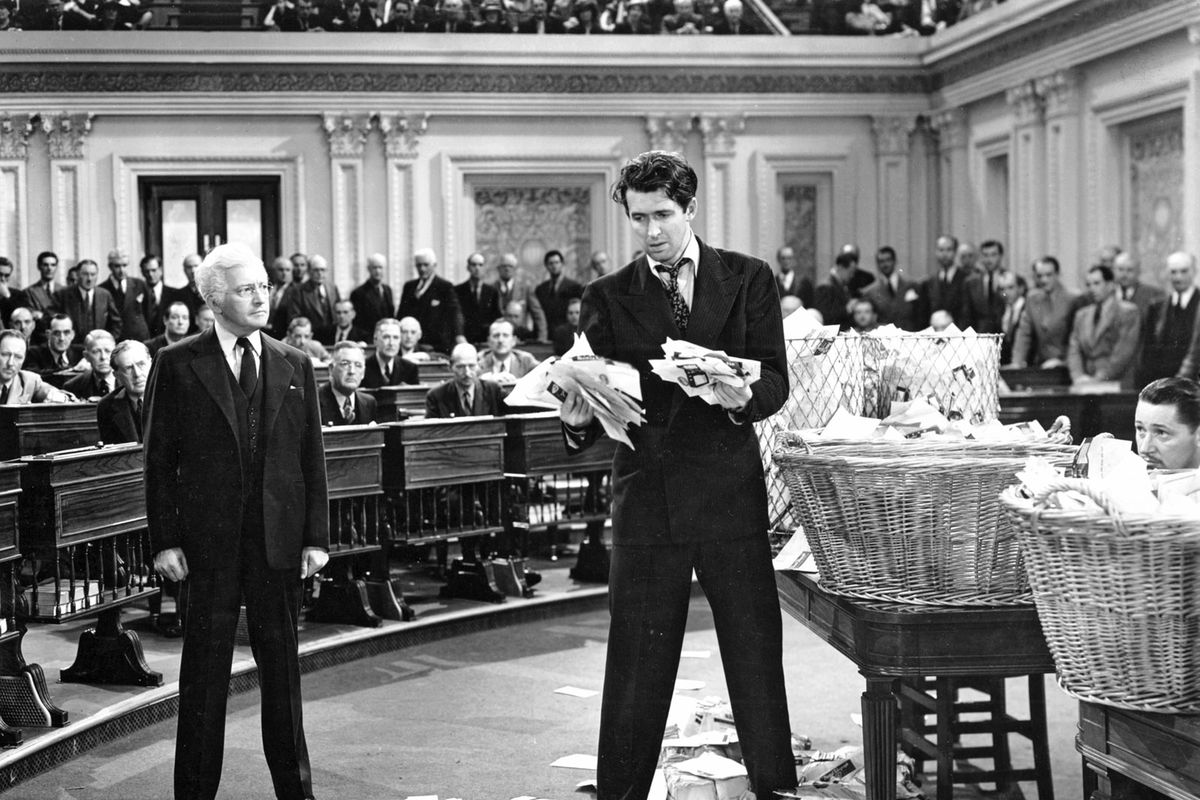 As I write this, the country is undergoing another lengthy inquiry into another potential instance of national political corruption.  At the same time, another group of first-time politicians is preparing to take office, to be confronted first-hand with the political machine on a national scale (and one of the better-known such idealists is a young woman, the youngest ever elected to Congress, from here in New York City).  My hope for them is that they are able to chart a different course than Jefferson Smith – that instead of being overawed by the thought that “wow, I’m in Washington now” that they are able to remember the dangers and pitfalls that await them, avoid the temptations of power, and actually change the narrative on this genre, maybe for the first time ever.