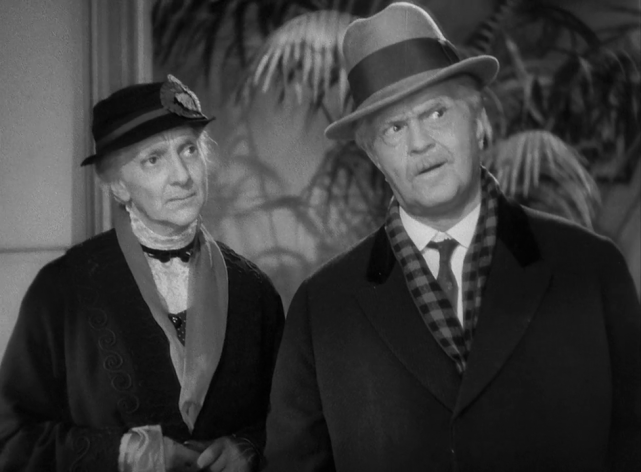 Several years ago, the directors Orson Welles and Peter Bogdanovich were having a conversation about the classic films Bogdanovich had been recently watching. One film, he told Welles, was new to him – Make Way For Tomorrow. “Oh my God!” Welles exclaimed.  “That’s the saddest movie ever made! It would make a stone cry!”

I mean, you kind of know what you’re getting into from the plot description. Lucy and Bark, an elderly couple with five grown children, lose their house in a foreclosure and appeal to their kids for help. Their kids all immediately say they will help, but the question is….how? No one seems to have the room to take both parents in, at least not right now, and gosh, they’d love to all chip in to help them find a smaller spot but they’re saving for their own kids’ college and have their own mortgages to keep up with and…you know how it is. The only child with space for them both is daughter Nellie, who asks for “just a few months” to talk her husband into it.  In the meantime, they decide, Lucy will move in with son George’s family in New York City 300 miles away, sharing a room with Lucy’s granddaughter Rhoda, and Bark will stay in town and move in with daughter Cora’s family, sleeping on the couch.  But this is only for now, everyone insists, while Nellie works things out with her husband.

Nellie’s negotiations don’t go well, however, and Lucy and Bark are stuck with George and Cora for the time being, a burdensome fate for all involved. Lucy is a Country Mouse intimidated by New York and stays indoors a lot.  George’s wife Anita is sympathetic, but Lucy being always underfoot and “trying to help” with household tasks causes friction. Rhoda is also unwilling to bring her friends to visit with Grandma Lucy always at the house and starts sneaking out with friends instead.  Bark’s not faring that well either – sleeping on the couch isn’t all that comfortable, and Cora is visibly frustrated with the whole situation, taking it out on Bark by treating him like a misbehaving child most of the time. Frustrations grow to the point that George starts investigating a nursing home for Lucy. As for Bark, he comes down with a cold, and Cora jumps on the chance to suggest that say, maybe he’d more comfortable living with their other daughter Addie in California? 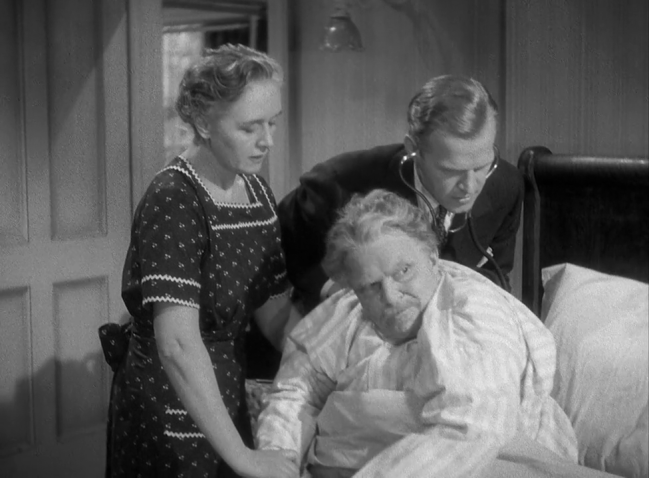 Now, this sounds a bit melodramatic and Lucy and Bark’s kids sound like jerks.  On the contrary – they are presented very sympathetically.  A lengthy scene sees Anita conducting a bridge class in the apartment one evening – something she does to help she and George make ends meet – and Lucy’s puttering around interrupts the class repeatedly, in one way or another. It’s excruciatingly uneasy – but you find yourself sympathizing with Anita.  Cora’s behavior is more overtly nasty – but it’s immediately clear that she has a much smaller house than her wealthier siblings and has been obviously taken advantage of by the others.  Sure, she’s not handling it well, but at least you know her bitterness has a cause. The whole situation is simply one of those lose/lose cases where no one is going to end up happy, and no one is at fault.

The final sequence is where things really get devastating, though.  It’s all been settled that Bark will go to California, promising to send for Lucy to join him “when he can”, and Lucy – begging the others not to tell Bark – has agreed to move into the nursing home. Bark comes to New York for an afternoon with Lucy, and the pair are supposed rejoin the kids for a farewell dinner before George heads to the train station.  But as the afternoon wears on, Lucy and Bark reminisce about their honeymoon in New York 50 years prior – and spontaneously decide to blow off their kids and recreate that earlier youthful visit.  They locate the hotel they stayed at, have a drink at the same bar, and dance at the same club – trying to pack as much in as they can before Bark has to board his train, and the pair are parted, very likely forever. It’s the longest amount of time in the film that we see the couple as a couple, and we truly get to see them as a couple – riffing off all of the accumulated inside jokes, rehashing the same decades-old friendly arguments, touching down on 50 years’ worth of the same shared touchstones that make up a shared story now come to a sad final chapter.  I was especially struck when the pair exchange a kiss over dinner –it’s not a sweet little smooch, it’s a kiss probably very like one they shared when they were 50 years younger and newly married.  They may be older, but they are still lovers – and they are about to be parted. 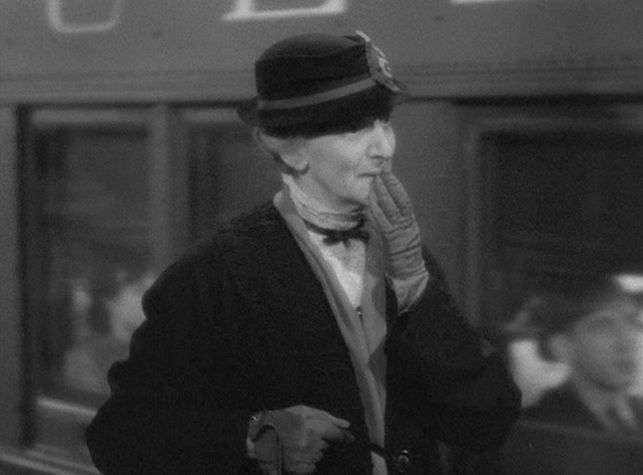 Adding to the power of that final act is the way that Victor Moore and Beulah Bondi (Bark and Lucy respectively) were playing their parts previously. Lucy and Bark are just this side of stereotype for the rest of the film – Lucy is saintly and long-suffering, flummoxed by modern technology and insisting she doesn’t want to inconvenience anyone, while Bark’s behavior during a doctor visit is 100% stereotypical “Grumpy Old Man”.  Bondi’s appearance throughout even bears a strong resemblance to the Looney Tunes “Granny” character.  So seeing all that fall away during the final act just drives home that these are people rather than just “a little old lady” or “a grumpy old man”.   And their previous moments aren’t even all that stereotypical anyway.  More like….old-fashioned.  Which makes sense.

I actually dragged my feet a bit on watching this, after reading the plot description – it sounded too depressing.  And while it is indeed sad – it’s not the maudlin, sentimental kind of sadness I was expecting, but something more tragic and inevitable.  And in today’s economically uncertain times, it is absolutely due for a remake.