It’d be easy to write off Jezebel as a copycat of Gone With The Wind – and in fact, GWTW director David O. Selznick accused the Jezebel team of doing precisely that, since there are a lot of parallels (spoiled Southern belle has a tempestuous relationship and gets her comeuppance).  There’s even a claim that Bette Davis was offered the starring role in Jezebel to cheer her up after she was passed over for the role of Scarlett O’Hara. But Jezebel – which was adapted from a Broadway play – is ultimately a little smaller in scope and sets up a bit more of a redemptive arc for its heroine.

Davis plays Julie Marsden, a thoroughly stubborn and spoiled society girl engaged to young banker Preston “Pres” Dillard (Henry Fonda) in 1850s New Orleans. Both Julie and Pres are rather forward-thinking; but where Pres’ views are about things like improving New Orleans’ sanitation and public transit systems, Julie’s “progressive” views are more about social mores and manners for women.  With her, however, that mostly manifests in fashion; she wants to wear vibrant colors to an upcoming social event, instead of the demure white that New Orleans society deems appropriate for unmarried women.  In fact, she uses this issue as a means to punish Pres early on, when he is unwilling to leave a business meeting and come dress shopping with her.  When Pres understandably refuses, she picks out a showy, scandalous red ball gown to wear to the high-society Olympus Ball that weekend.  Pres begs her to change – but Julie accuses him of not being brave enough to defend her against criticism.  Pres decides to give her what she wants, in the hope that maybe she will learn a harsh lesson.  But when Julie’s dress causes a scandal and she realizes her mistake, the pair lash out at each other after the ball and the feud breaks them up.

Pres leaves New Orleans on business soon after, and Julie spends the next year as a relative recluse; regretting her mistake and pining for Pres, feeling too stubborn or embarrassed in turn to write him and ask him back. Then Julie learns of Pres’ return, and joyfully receives him in a new white dress – and is also introduced to Pres’ new wife, a lass from a prominent Northern family.  Shortly after Pres arrives, so does the threat of a Yellow Fever epidemic – so Julie suggests Pres and his wife, along with several of their friends, join her in relocating to her family’s estate just outside town.  There she starts a campaign to either win Pres back or punish him – going so far as to egg another fellow to start a duel with him – but as her plan unspools, her motives become more and more apparent, gradually turning everyone against her.  And then someone in the house catches Yellow Fever themselves… 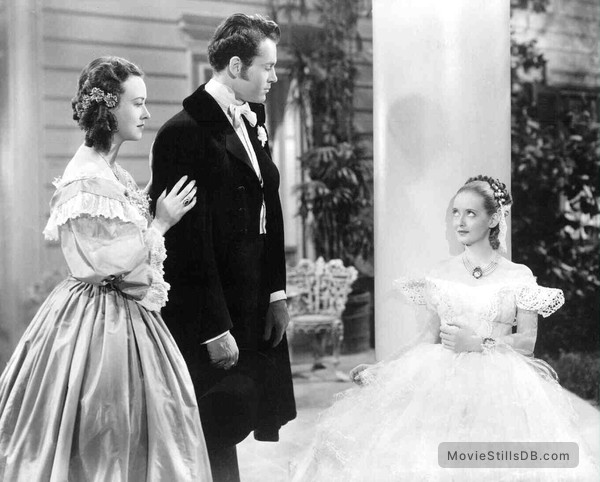 Now, I’m ordinarily not all that sympathetic to a character whose big obstacles seem to be “I want to wear what I want whenever I want and people should just deal with it” and “my guy left me because I was a selfish brat”.  Doubly so when their response to the news that her guy has married someone else is “well I’ll just try to break them up”.  I have always had something of a strong “fair play” instinct, and I always want to see such characters get their comeuppance.  (….Okay, maybe I can get bitter about this kind of thing, hush.)  So while the redemptive arc Julie takes at the film’s end feels a little weak, I appreciated that the film took pains to make it clear that Julie realizes that “oh wow, I really screwed up.”  In fact, the film does it twice – once to teach Julie that she shouldn’t meddle in a marriage, but also earlier, when she wears that scandalous red dress to the ball. 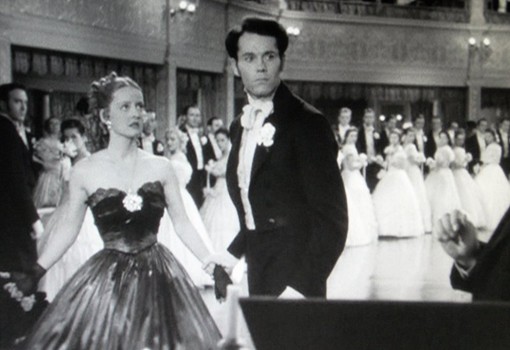 I also usually don’t like scenes that are all about manners and social niceties, but this sequence was brutal.  Julie triumphantly walks into the ballroom on the arm of the stone-faced Pres, proudly beaming at all the other partygoers.  Except they’re not smiling back.  When Julie and Pres approach anyone, they’re initially cordial, but make excuses and leave.  When they step on the dance floor, everyone else wordlessly withdraws. Davis’ performance makes it clear that Julie realizes she messed up big time – and she repeatedly pleads with Pres to take her home, but Pres has decided to give back stubbornness for stubbornness and he all but manhandles her into a dance, even ordering the orchestra to start back up again when the conductor, wildly uncomfortable at the spectacle, stops the music.  Fonda’s stony resolute face and Davis’ shrinking courage make for a haunting scene, and even as you’re saying “yeah, Julie, you brought this on yourself,” you find yourself feeling some sympathy for her as well.  Then her behavior towards Pres’ wife destroys that sympathy when she’s up to her old tricks again.

Davis won the Oscar for Best Actress for this at the end of the day, a year before Vivien Leigh’s Oscar for Gone With The Wind.