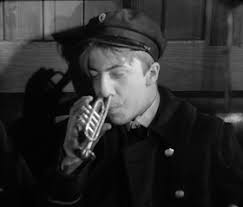 Zero de Conduite is…puzzling.  But I can’t decide whether or not it’s supposed to be.

It’s about a group of boys at a French boarding school who plot a takeover of the school, barricading themselves in an attic and throwing garbage on the teachers’ heads during a school assembly and hoisting a Jolly Roger flag on the roof. This was apparently shocking back in the day – the film faced censorship in France when it was released – but it seems more like a Home Alone-style romp today, with the naughty-boy heroes pulling loads of preliminary pranks like staging a food fight to protest a meal, using a pillow fight to suppress their dorm monitor and setting booby traps to bait other teachers.  Along with more mundane pranks like playing trumpets with their noses or sneaking smokes.

But the style and the brevity of the film made things a little hard to follow.  The brevity in particular – it’s only about 45 minutes long, which left vanishingly little time to develop any of the boys’ characters at all.  We’re theoretically following four ringleaders in the rebellion, and for the life of me I couldn’t tell you their names.  Or, rather, I know their names but I couldn’t tell you which boy was which – they seem to work as a unit, frequently getting slapped with the sentence of “zero points for conduct” and sentenced to detention over minor offenses.  I did grasp that one boy is the son of the school’s cook, and another is a little bit of a dandy who seemed to have a bit of a crush on one of his older classmates.

The dandy commits the only really defiant act before the rebellion. During a science class, the teacher seems to fawn over him, going so far as to creepily pet him because he seems upset.  The boy is understandably unnerved and shouts out that he’s “full of shit”.  He’s offered the chance to be let off with just a warning if he publicly apologizes, but the dandy joins the rebellion instead, offering some tactical planning expertise.

But I’m making this sound like there is much more coherency to the film. The film’s style is quite different – things just sort of…happen, and you’re expected to follow along, like when one of the school’s new teachers is strolling around the playground during recess and suddenly busts out with a Charlie Chaplin imitation.  Or another teacher stumbles upon a grafitti’d caricature one of the kids has made of him – and a brief bit of animation shows the doodle reacting with alarm at having been caught.  And there are less sensible bits – like during the climactic school assembly, which sees two gendarmes in attendance, both of them casually exercising on gym equipment.  Why?  Beats me.  Before I could figure it out I was being shown that half the attendees of the assembly were mannequins.

It’s possible that director Jean Vigo was depicting a child’s understanding of things, actually. You don’t really see the connections between events when you’re that age; stuff just sort of happens, and it’s either good or bad.  The cool teacher may suddenly do a handstand in class, and that’s cool.  The mean headmaster may shout at you in his office, and it’s scary. There’s that one creepy science teacher where you can’t quite put your finger on why he creeps you out, because you haven’t really seen him do anything, like, bad, but you just get a bad vibe so everything he does is creepy, even just taking off his tie or opening a book.  You may notice that the cook’s son is sad during the food fight and you suddenly feel sort of sorry for him and you get everyone to stop.  You may get into a full-scale pillow fight in your dorm, and it’s totally epic and it’s like you can see the whole thing happening in slow motion in your head, especially when that one kid does a backflip and his nightshirt falls down and you can see his weenus and it’s funny.  And then when the moment ends, it ends, disappearing into your subconscious but otherwise just sort of letting you go your way, and hopefully you’ll make the connections later when you’re older; but right now, everything seems arbitrary and baffling, so you just go with it and trust it’ll make sense eventually.

And that matches my reaction here. I’ve made those connections now, but in the moment, when watching the film…I was pretty confused.