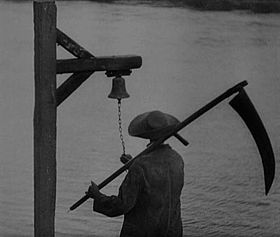 It’s a vampire film, but this time you don’t know the drill.  Vampyr is deliciously different.

Rather than Bram Stoker’s story, Vampyr is inspired by an earlier vampire story – Carmilla, by the Irish author Sheridan le Fanu.  Carmilla is a subtler tale, with a lonely young noblewoman befriending the daughter of a traveling count, and gradually learning that her friend is not what she seems. Vampyr takes a few liberties – the hero of the story is a young traveler who stumbles upon some mysterious goings-on with a pair of sisters and decides to help.

The plot wasn’t what caught my eye, though. Instead of relying on lots of whiz-bang special effects, the film goes for subtleness – in the performances, the cinematography, and the staging.

There is very little dialogue for a sound film, and what’s there is really cryptic.  Like this one, between our hero Allan Grey and an old man he runs into while poking around in a creepy abandoned barn:

Or this – this is the entirety of a conversation that Allan has with another old man who’s unexpectedly come into his (locked) room at an inn early on:

GREY: ….Who are you?
OLD MAN: (stares, walks over to desk, puts a package down on it) She mustn’t die.  (stares a few seconds more, walks out)

Mostly what we get are a series of unsettling images and film sequences.  There’s a sequence where we watch a coffin being carried to the graveyard – from the point of view of the corpse inside it.  A skeleton’s hand stretches out to offer a vial of poison. Grey frequently sees disembodied shadows – dancing in a barn, running across a meadow. One even stands guard over the head vampire’s lair.

We never see the vampire-cursed sister attack anyone – but in one scene she gives her younger sister a look that suggests that she very much wants to.

Strangely, it reminded me of what it was like to attend the “immersive theater” show Sleep No More.  In that show, much like this film, I was thrown into the middle of a rich world where everyone else seemed to know what was going on; but I was stuck trying to figure it out, following people from room to room if I happened to see them, puzzling over books and bottles and shadows, getting uneasy feelings about things without really being able to explain why.

Unfortunately for director Carl Theodor Dreyer, audiences of the 30s didn’t really go for subtlety.  One German critic called Vampyr “one of the worst films I have ever attended,” and the New York Times reported that the film “either held the spectators spellbound as in a long nightmare, or else moved them to hysterical laughter”.  However, even the bad reviews noted that Dreyer’s approach was distinctive.  He may simply have been ahead of his time; the film’s reputation has enjoyed a makeover in recent years, with many polls today putting it at one of the top ten best horror films of all time.