Trouble in Paradise might be the first screwball comedy in this list – depends on how you define “screwball comedy”, that is.  Is it the comedic misadventures of the plot?  Do you need the Sorkin-paced dialogue?  Must the plot simply be about romantic misadventures, or does this film’s subplot of grifting disqualify it?

Oh who cares, it was fun.

The film kicks things off in a hotel in Venice, where visiting dignitary Francois Filiba has just been knocked out in his hotel room and robbed.  All he remembers is that a man claiming to be a doctor came to his room, insisting he’d been summoned to tend to Filiba’s tonsils.  Filiba hadn’t called for the doctor, and his tonsils were fine, so far as he knew.  But – he got so fascinated with their ensuing conversation about tonsils that he agreed to let the doctor check him out anyway.  Next thing he knew, he was waking up on the floor.

Elsewhere in the hotel, con man Gaston Monescu – posing as a baron – is preparing for a tryst with “Countess Lily”.  Except – midway through their cocktails, he discovers that she’s conning him right back.  And Lily’s an expert pickpocket.   This makes Gaston even more interested, and the happy pair decide to join forces for a life of romance and crime. They slip off to Paris, where they settle on petty theft for their next caper – prowling an opera house during the show and stealing some of the finery off the patrons.  The biggest score is a diamond-bedecked handbag they’ve stolen from Mariette Colet, the owner of a perfumery. They plan to pawn it along with everything else – but when Mariette announces the offer of a reward three times the pawn value, Gaston decides to play Good Samaritan instead. Mariette’s beauty turns his head when they first meet – but her inattention to her financial records intrigue him even more, and Gaston suggests – how about taking him on as a financial secretary?  And what luck, he knows a nice young girl named Lily who could do some office work for her as well, shall he call her? 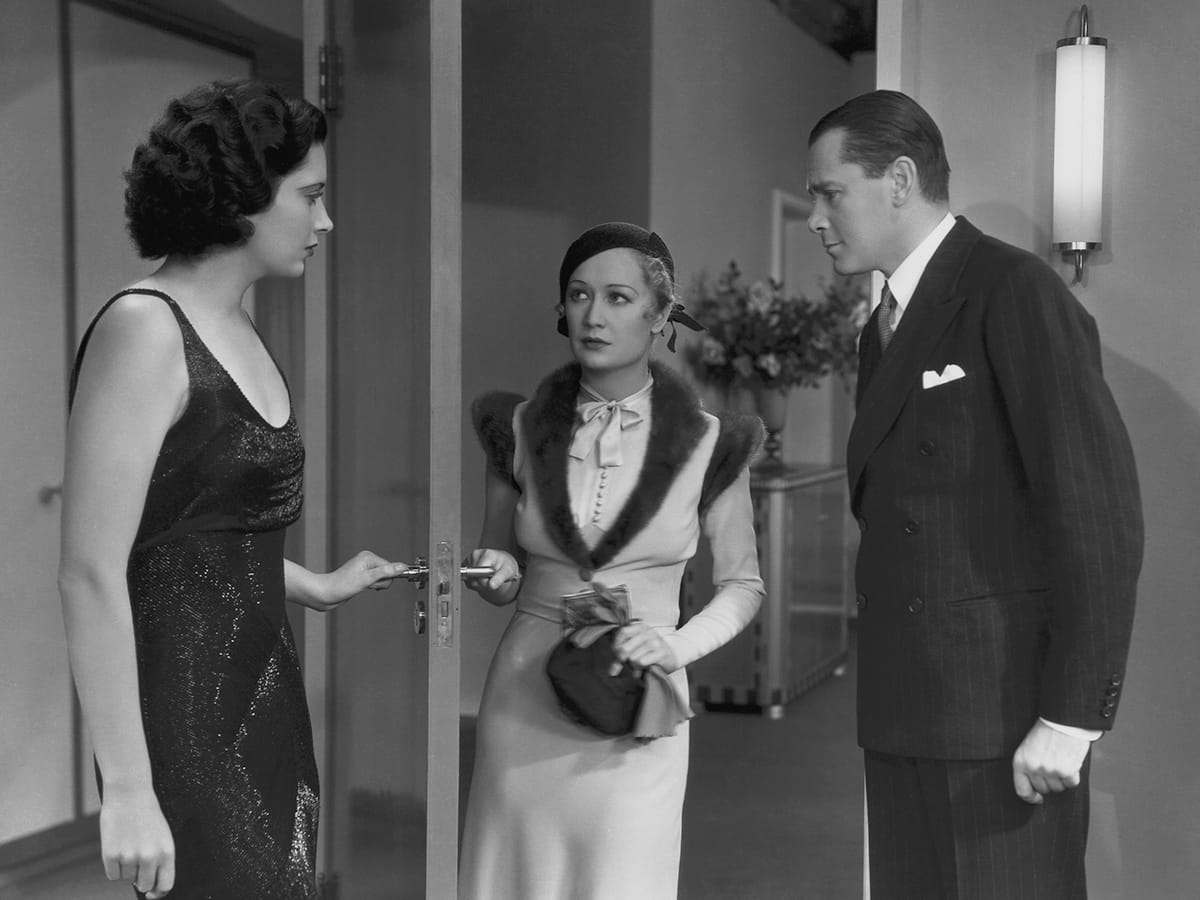 Gaston and Lily’s plan is to stay a few days, subtly transferring money out of Mariette’s bank account, then to break into the safe and take all the cash before running off.  But Gaston finds himself more and more taken in by Mariette, who makes it quite clear that she reciprocates his interest. Lily, looking on, finds herself getting more and more uneasy – just as uneasy as Gaston when he learns that one of Mariette’s other suitors is none other than Francois Filiba, who keeps wondering aloud that he thinks he knows Gaston from somewhere but can’t remember where just yet….

It’s a deliciously fun film.  It’s actually a little weightier than what you think of from a screwball comedy – the pacing isn’t as silly and fizzy.  But instead of coming across as slow, it comes across as suave and sophisticated – and sexy as all hell.  Not that you see any outright sex – that was still a bit of a bridge too far for the 1930s – but in the days before the Hays Code put serious restrictions on sexual content, there is some serious innuendo.  Some of it is even wordless – during Gaston and Lily’s first meeting, after they’ve discovered the truth about each other, they start making out on a couch.  Gradually, as we watch, the scene crossfades to the same couch – now empty, implying that the pair have moved to the bedroom.  Another scene sees Mariette propositioning Gaston, purring that they two could be happy together for “weeks…months….or years.”  The camera jumps around the room as she speaks, catching their reflection in different mirrors – then finishes by catching their shadows falling across Mariette’s bed.

Trouble in Paradise was one of the first big hits for director Ernst Lubitsch, a German expat who went on to produce several other wildly popular comedies, like The Shop Around The Corner and Ninotchka (which looks like it will turn up later for me).  Many of them feature the same kind of wit and sophistication that we see here – so much so that critics soon hailed films with his particular style as “having the Lubitsch Touch”.  However, the sexier bits in his later films had to be curtailed under the Hays Code,  a set of “moral guidelines” for filmmakers enacted by Hollywood studios from the 1930s through the 1960s.  Much like our modern rating system, the Hays Code set limits on what sort of content was acceptable viewing for general audiences; unlike our rating system, there was a much tighter rein on sexualized content, with rules about how long actors could kiss (timed out by the second), how they had to position themselves during love scenes, and the like.

Unfortunately for this film, the code also applied to films which were made before the Code’s creation.  It didn’t matter if the studio wasn’t enforcing the code back then – if you violated the code, your film couldn’t be shown to general audiences.  As a result, Trouble in Paradise was quietly shelved for many years after its initial release, and was rarely seen until 1968, when Hollywood relaxed its standards again.