I was not looking forward to this film.  Produced in 1935, Triumph Of the Will is a chronicle of the previous year’s Nazi Party’s national convention in Nuremberg, Germany.  It is beautifully shot, lovingly detailed, and absolute in its admiration; while this film is often categorized as a “documentary”, it’s more accurate to say it’s a fan letter.

I was not expecting for it to be stultifying boring.

I tried to keep an academic mind about this (even though I was literally wincing when I put the DVD in my player).  Critics have pointed to director Leni Riefenstahl’s innovative and gorgeous cinematography – apparently she went to great lengths to get the shots she had in mind. Her crew consisted of 172 people, including 36 cameramen, nine aerial photographers, 17 newsreel men, and 17 lighting men, as well as scores of production assistants. Many of her cameramen dressed in SA uniforms so they could blend into the crowds. Riefenstahl also worked closely with the rally organizers to design the set and stage so as to allow her team the best access and the most striking shots; the stage included everything from a special sunken camera-crew pit set just before the podiums so the cameramen could capture the exact angle she wanted, to a motorized platform just behind a banner at one rally so she could capture the precision of a parade of military men.

Riefenstahl’s attention to detail also captures smaller details – cats lingering in windows watching marching S.S. troops, the dancing reflection of a Nuremberg riverside building festooned with a swastika banner, the excited gleams on the faces of little kids in the crowd clamoring for a space to watch the parade. 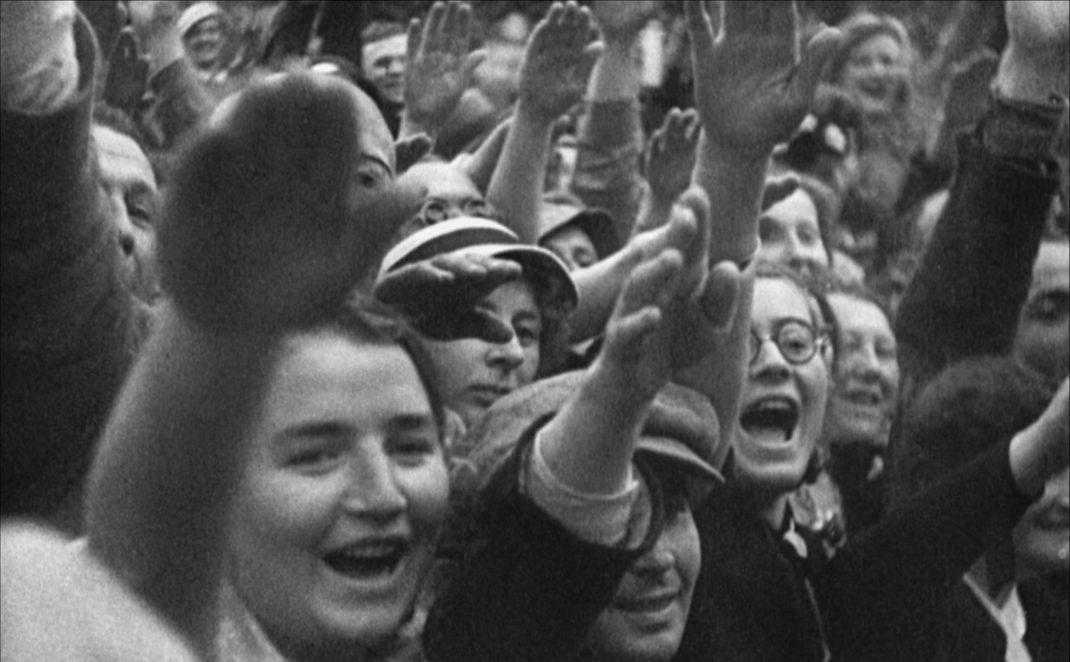 These are all technically skilled shots. But quite frankly, they’re lipstick on a pig; and I’m not only saying that because of the subject matter. No matter how attractive are the shots of the parading S.S. troops, the fact remains that easily 75% of this film is nothing but an monotonous series of parades, drills, and marches. There’s a ten-minute sequence that consists solely of the various S.S. units goose-stepping down the same Nuremberg street past Hitler’s reviewing platform; they march, he salutes, they march on, the next group comes in, does the same thing, they move on, the next comes in, lather, rinse, repeat, for ten full minutes.  I literally kept falling asleep during the last two minutes and had to keep rewinding to rewatch and make sure I hadn’t missed seeing anything else happen.  Ultimately I didn’t need to, because nothing else did happen. There are a couple of sequences that are different enough to stand out (or, that stand out because they’re a little different).  Early on is a scene at the Hitler Youth Campsite, showing crowds of apple-cheeked kids and teens – all boys – carefully washing their faces and hair in the spartan latrines and chipping in to help with toting firewood for the camp stove before gathering for pickup games of wrestling, acrobatics, and other random stunts; every so often Riefenstahl shows us a closeup of a boy laughing in delight.  It comes across as an earnest, somewhat corny sort of thing, like a scout jamboree.  Never mind what these kids are being taught, they’re having fun!

….There is no similar coverage of any such rally for the girls’ organization.  I cannot speak as to why.

The rally for the Reichsarbeitsdienst, or Reich Labour Service, is a little more serious, and very clearly and carefully scripted. The Labour Service was a quasi-military organization, compulsory for all Germans, which sent adults out to various work camps and work details for six-month stints to do things like build bridges or create roads or work on farms (or, in the case of women, serve in hospitals or do clerical work for the government). Every Labour Service member was issued a shovel, which they treated with pride; the rally opens with a precision drill shovel display before Hitler. But then a smaller team of the service steps forward to give a group vow, reciting that they are laboring in the swamps, in the fields, in the mountains; building roads between towns, repairing damaged bridges, shovels proudly in hand.  A leader in the group steps forward, looks at another man, and asks – “Where are you from?”

The leader looks at another man.  “Where are you from?”

“And you, where are you from?”

The leader takes a roll call of a couple more cities or districts before announcing that the labor force has come from all over Germany, to serve as a united force serving the whole of Germany.  It’s pure political theater – yet it is expertly done political theater.  Hitler’s address to the force is brief – at least the piece we see is brief – and consists of Hitler heaping praise upon the unit, declaring that thanks to their efforts, manual labor will no longer be seen as a lower-status profession.  They are to be exalted, for they are rebuilding Germany.

In retrospect, I’ve been thinking that sequence is not dissimilar from more recent political speeches about putting “America First” and pledges to bring back manufacturing jobs.  In 1935, as in 2018, people want to work, and they want the work they do to be treated with dignity. But there are many ways to put people to work, just as there are many ways to ensure a worker has that dignity; compulsory labor service under the aegis of a political party indoctrination gets that job done, but at too high a cost.  Today, we’re going the route of enacting trade tariffs and inflating statistics – a bit better, but still a misguided solution that misses the root of the problem.

But then again, maybe “addressing the jobs crisis” was never the goal anyway.  That sounding-off of German towns didn’t just showcase that “we’re working together to rebuild Germany”, it was also showcasing that “we are the exalted group”.  And any time you single out some people as an exalted group….you diminish those outside the group.  At the time Triumph of The Will was filmed, the “Final Solution” policy was still eight years in the future; but the seeds of it were no doubt laid right here.

This is not to say that the laborers shouldn’t have been given a showcase. The work they were doing was mammoth work, and the people being celebrated had been feeling dangerously downtrodden for a long time.  They were suffering under an economy in shambles following World War I, most of them hearing about elite fashionable artistes living it up in the cities while they struggled.  They were fed up and wanted their share.  The trouble then – as now – was that no one had the vision to state that dignity, equality, and prosperity isn’t like pie – the laborers don’t have to steal their dignity from the musicians, they can both be appreciated for their actions.  The immigrant ditch-digger isn’t stealing a job from the Saxon one – if you hold the people in charge accountable, there will be enough jobs for both.

There was an opportunity for someone to point that out.  No one took that opportunity.  We know what happened next.  And, if we’re not careful, we know what could happen next for us today.

….After watching this film, I permitted myself a palate cleanser.  Watching the “Springtime For Hitler” sequence from the 2005 musical version of The Producers about three times in a row did the trick.