I’m still trying to make up my mind whether The Bitter Tea of General Yen condemns prejudice against Asians or perpetuates it.

This early Frank Capra film featured Barbra Stanwyck as the naïve Megan Davis, childhood sweetheart of missionary Robert Strike.  She’s just arrived in Shanghai to marry him, landing right smack in the middle of the Chinese Civil War and coming straight off the boat to the bishop’s home for the service; but Strike asks to postpone the wedding just a couple hours so he can rescue a group of orphans trapped near the battlefront.  Megan not only agrees, she asks to come along and help.  During the orphans’ rescue, however, Megan and Rob are separated, with Megan getting knocked out to boot.

She wakes up to find herself on board the troop train owned by General Yen (Nils Asther), a Shanghai warlord who insists travel back to Shanghai isn’t safe – so he is taking her to his summer palace, for her own protection, until things settle down.  But it soon becomes clear that Yen has some ulterior motives – he keeps delaying her return to Shanghai, persistently invites her to intimate dinners (sending elaborate dresses for her to wear) and secretly hides all the letters she has been writing Rob and asking Yen to send him. 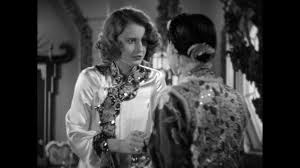 Megan gradually realizes Yen isn’t about to let her go.  But she is even more uneasy to realize she has a growing attraction towards Yen herself.  She’s still plenty mad at him – on top of her own captivity, she is horrified by Yen’s carrying out executions under her window, and outraged at his malice towards his concubine Mah-Li – but Yen calls her on her hypocrisy a time or two, adding to her stew of conflicting feelings…

The conversation where Yen calls her out was most gripping.  Megan has come to his room to plead mercy for Mah-Li – but her arguments all come straight from a missionary playbook: “I want you to see the beauty of giving love where it isn’t merited. Any man can give love where he’s sure of its return. That isn’t love at all. But, to give love with no merit, no thought of return, no thought of gratitude even; that’s ordinarily the privilege of God. And now its your privilege.” Yen listens, bemused; but then takes Megan’s hand as a challenge.  She recoils – her Christian love of others clearly has some limits.  “You didn’t come to speak to me,” he sneers, “you came to preach to me.”  Megan is clearly troubled by the accusation – and the dawning suspicion that he may be right about her hypocrisy. 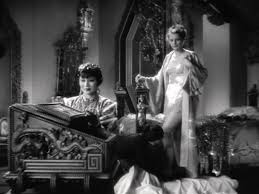 Of course, Yen’s no innocent, even though the film is trying to make him out to be one. But for every point the film makes in his favor, it tosses in a cruel quip or a mean look that pushes Megan – and us – away.  It’s possible that Capra intended us to be as conflicted as Megan; but it’s possible Capra was just as conflicted himself, as the film’s depiction of China is not always as sympathetic as you’d expect from an apologetic.  An early scene sees the bishop telling a hair-raising story about some Mongol tribesman who’ve learned the story of the Crucifixion and then proceeded to crucify some neighboring tribesmen themselves.  As his listeners tut-tut in horror, the Bishop shrugs. “That, my friends, is China,” he concludes – and the camera then cuts to a stern-looking Chinese butler, who does nothing but stare into the camera for a few seconds.  Capra may have been trying to play up the fussiness of the clergy and then show us an “innocent Chinese man,” but it comes across more like punctuation for the bishop’s story. 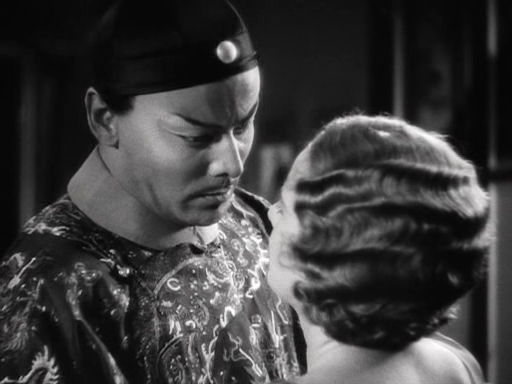 To be fair (although not by much), casting a Caucasian man as Yen may have been Capra’s attempt to dodge backlash from a moment he predicted would raise eyebrows.  There are some romantic and seductive scenes between Megan and Yen, at a time when interracial canoodling was Just Not Done, both in real life and onscreen. Critics still predicted that the scenes would raise a ruckus – and they did, causing some countries’ censors to demand cuts before they would screen the film.  In the US, The Bitter Tea of General Yen has the distinction of being the first film screened at New York’s Radio City Music Hall; but even here, the distributors cut short the film’s scheduled two-week run, pulling it off screens after only eight days. Both Capra and Stanwyck remained proud of the film, with Capra calling it “Art with a capital ‘A’.”