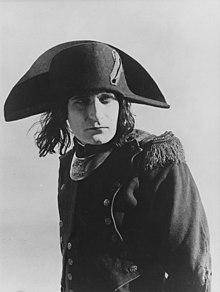 Jumping back a bit to 1927, for Abel Gance’s Napoleon.  Which was certainly as ambitious as its subject.

This particular film only covers Napoleon Bonaparte’s early years; his childhood, his early notoriety in the French military, his first Italian campaign at the age of 26, his budding romance with Josephine.  Director and filmmaker Abel Gance intended for this to be the first in a six-part series covering Napoleon’s entire life.  Production costs and technical difficulties made him reconsider, however. Gance also faced pushback from distribution studios, who took one look at Gance’s original five-hour movie and made their own cuts, trimming out an hour or two here or there, so they could release it.  Miffed, Gance then released his “director’s cut” – a nine-hour extravaganza.  Studios understandably balked and kept the shorter version.  Gance did release other films, but kept tinkering with Napoleon throughout his career, or served as a consultant when yet other filmmakers tried their own hand at re-edits (Francis Ford Coppola did his own cut in the early 1980s, with an orchestral score by his father Carmine).

There is indeed some impressive technical work.  Gance wanted a film that moved, and came up with some creative ways to get a camera into the middle of the action; strapping cameras and their operators to sleds, horses, boats, or wagons.

During an early sequence depicting the young Napoleon in a pillow fight with the boys in his military academy, he tied the camera directly to the operator and sent him running around in the midst of the chaos.  Another sequence has Napoleon alone in a boat during a storm, with some impressive shots of the waves and the swells that must have been filmed live.

Gance also uses double exposures for emotional impact, much as he did in his earlier La Roue – such as when a lovestruck Napoleon imagines he sees Josephine’s face in a globe, drawing laughs from onlookers when he “turns her face” to kiss “her cheek”.

The biggest challenge, though, came at the end; a triptych sequence showing Napoleon reviewing his troops before their initial invasion of Italy. Gance felt that the average movie screen wouldn’t give a good idea of the scope of the army; so he came up with the idea of three screens in a row, each showing part of a three-screen panorama.  He simply shot the sequence with three cameras side by side, each filming their own piece of the full panorama.

….This is probably where the home viewer like me is at a disadvantage.  In a movie theater, with the film suddenly widening on either side into a panorama wrapping around me, this would have been stunning; but at home, the image on my screen started shrinking, like an iris closing, leaving me baffled until the image was small enough for the two extra parts of the triptych to be added on either side.  Even so, as small as the triptych was, I was still impressed at how well-coordinated it was; you can see the seams between each image, but the panoramas are almost perfectly lined up, leading to one grand moment with Napoleon galloping a horse the full length of the triple screen.

But the triple screen also gets used for some Symbolism later on.  And this is the biggest problem I had with the film; every so often, Gance throws in some poetic license or some camera trickery in the service of mythologizing his subject.  In one scene, just before his Italian Campaign, Napoleon visits the empty French Convention Hall and sees the ghosts of Danton and Marat urging him on.

In the scene just before Napoleon is at sea in a storm, the film shows how he got there – he is fleeing some soldiers during a civil war in his native Corsica, and comes upon an old fisherman’s dinghy, missing its sail.  But he just so happens to have a French tricoleur flag with him, and uses that to fashion a sail and make his escape.

The final few minutes of the film start with Napoleon simply looking out into the distance and imagining his future, before the triptych screens come up again, showing us an explosion of images – marching troops, a spinning globe, Josephine’s face, maps, scenes of battle, a tumult of images repeating over and over and bouncing from one screen to the other for a moment – and then the two side screens change color, one to red and one to blue, creating a huge tricoleur upon which Napoleon is watching his destiny unfold.

I mean, it’s technically impressive. But I’m probably too much of a 21st-Century cynic to give into this kind of mythologizing, and found myself rolling my eyes at some of the more egregious moments.  I am still curious about how a full-theater experience would be different however; these days, you can occasionally find special screenings of Gance’s film with Carmine Coppola’s score performed live, and I may attend.