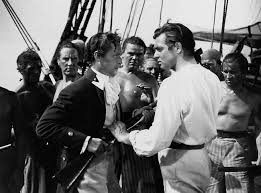 I’m afraid I approached Mutiny On The Bounty with a bit of a bias.  I did try to ignore it, though – to no avail.

Thirty (!) years ago, I was a drama student at New York University. One of my drama coaches was discussing being true to how your character would have “really felt” in a given situation, and as an example he pointed to Mel Gibson in The Bounty, which was the 1984 movie about this historic mutiny.  “If you watch the mutiny scene,” our coach said, “you can see that Mel Gibson looks terrified.  And that makes sense, because Fletcher Christian would also have been terrified at leading a mutiny.”  Then he scoffed – “Clark Gable, now, he just looked like he was trying to be heroic when he was Christian.  That wouldn’t be the case at all.”

There are other discrepancies between the 1984 Bounty and this one, as well; but this is no surprise, as the times were different as well.  The 1984 version was based on the historic account itself, while the 1935 version was based on a fictionalized version of events. No doubt the 1930s taste for escapism called for a story with much more thrilling heroics and an obvious hero and a clear-cut villain. 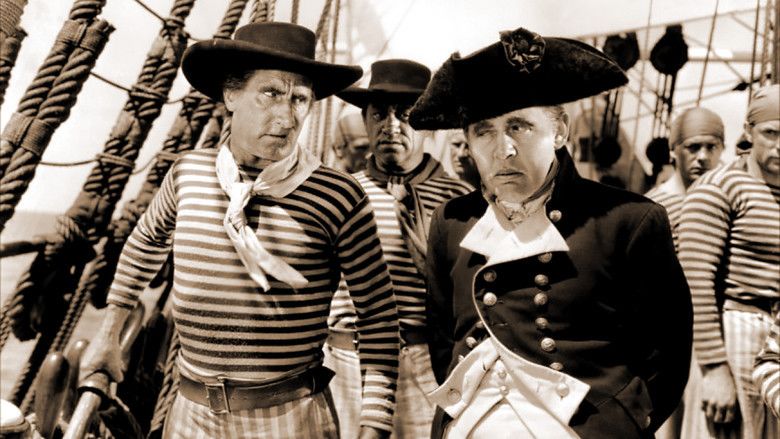 And we certainly get a villain with Charles Leighton as Captain Bligh.  The very first time we see Bligh, he is on board the Bounty, warning his crew that he deals sternly with miscreants; as an example, they are all to witness the flogging of another sailor who struck an admiral.  But right as the sergeant is about to carry out punishment, he notices – the sailor is dead.  “…..Proceed with the flogging”, Bligh says drily.

By contrast, the first time we see Gable as Fletcher Christian, he is sauntering into a pub with a smirk, leading a press gang to draft a few unwilling sailors into the crew.  “We’ve got all the fish we need in one net!” he gloats, looking at the crowd in the pub. But just one scene later, he’s downright avuncular with one young draftee, offering him protection and urging him that “if anyone mistreats you, you come to me.”  And then just one scene after that he’s teasing the snooty know-it-all midshipmen on their first voyage by giving them a tricky pop quiz on navigational techniques.  And one scene later….

You get the idea.  The whole rest of the film is like that – Clark Gable bouncing from smirking rogue to frustrated leader to besotted lover to swashbuckling hero, while Charles Laughton is just uniformly mean throughout – barking orders, starving the crew, skimming off rations for his personal use, doling out floggings and keelhaulings and other punishments for the skimpiest of offenses.

And as if that all didn’t make it very, very obvious where our sentiments are supposed to lie, we get a completely imagined scene towards the end with Roger Byam (himself a completely imagined character); Byam was swept up in the mutiny and later caught; at his court-martial, he explodes, giving the court a lengthy and vitriolic accounting of All Of The Reasons Captain Bligh Sucked.  (Most of which we’ve already seen.)

There are a few other bit parts, all of them a little one-note – the young draftee Christian takes under his wing, who just wants to get back to see his wife and baby boy again.  The ship’s doctor, who’s blitheringly drunk most of the time and dispenses booze as medicine, but who looks out for the men and tries to keep them in good spirits.  The sailors who signed on to dodge prison sentences and now suspect they made the wrong choice. It’s obvious from the first what we’re supposed to think of each character when we meet them, and everyone falls neatly into one trope or another throughout.

Yikes – I sound like I’m thoroughly trashing the film.  It wasn’t that bad; not my absolute favorite, no, but not terrible.  However, even though I was trying to ignore what my old drama coach told me, Clark Gable was just plain getting on my nerves throughout the whole thing – he felt more like he was trying to Look Heroic than play a part.  Even at the very end, when he’s in a weird sort of Pirates Of The Caribbean costume looking hunky while the rest of the mutineers all are thin and scruffy – Clark Gable is clearly trying to just be Hunky Clark Gable, and I don’t buy it.