Back to our timeline!

This time we’re following the story of Michel, a starving artist living in an atelier in Paris.  His girlfriend Beatrice, a ballerina, lives across the hall; his buddy Prosper, another artist, comes to assist now and then; sometimes with the art, but mostly to keep Michel’s landlord and creditors from catching up with him.  But they’re fed up, and have gathered to storm Michel’s studio and get their money for once and for all. Michel manages to get past them, leading them on a wild goose chase through the building.

Beatrice cowers in her apartment during the chaos – and suddenly an old man, himself on the run from the police, climbs in through her window and begs for help.  The sympathetic Beatrice sees a jacket Michel’s left in her apartment and urges him to put it on; when the police come by, the man keeps his back turned and Beatrice insists that no, there’s no one else here but her grandfather!  She tells him he can keep the jacket as the police leave; her grateful guest tells her to call him “Grandpa Tulip” and pledges to return the favor before slipping back out the window.

Michel is meanwhile still on the run from his creditors, who are all called to a halt when the newsboys announce that there’s a lottery winner somewhere on that very street.  Michel grabs a paper and consults the winning numbers – and what luck, discovers that he’s the winner!  Hooray, he can pay his creditors!   And then some!  The mob, now turned into a party, heads back up to Michel’s apartment to get the ticket.  He searches for it, then realizes – he left it in the pocket of the jacket he left with Beatrice. 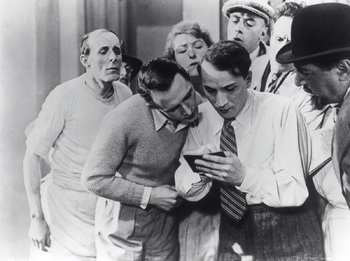 Meanwhile, Grandpa Tulip is back at his thrift store, where he puts the jacket up for sale – and it is almost immediately sold to the opera singer Ambrosio Sopranelli, who thinks it’s a perfect addition to his costume for that night’s performance.  But Beatrice is a backup dancer in the show, so maybe she can help Michel and Prosper get it back?…. 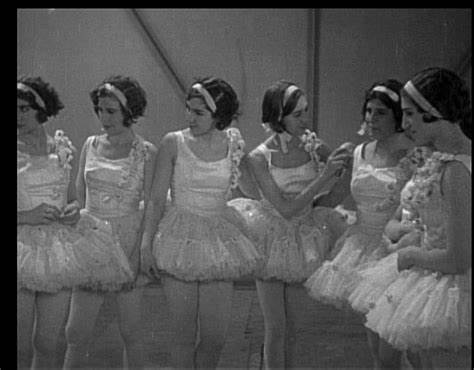 Clair finds opportunities to hang all sorts of utterly delightful comedic moments on that frame – a pair of society matrons try to throw Sopranelli a bouquet onstage but have terrible aim. Michel finds himself in jail briefly and is confronted with the world’s slowest desk clerk and a bizarre assortment of fellow offenders.  Sopranelli is an enormous diva who keeps picking fights with his costar.  Michel and Beatrice get caught onstage during Sopranelli’s big duet and are forced to cower behind the scenery.

There’s also a moment that plays up Clair’s inventiveness with sound. Clair started out in silent film, and like some other directors, he was dubious about sound technology when it was introduced. But he ultimately decided to play around with it a little. He tries out a few ideas in Le Million –  now and then, Michel or Prosper are addressed by an unseen voice, which we soon learn is their conscience.  There’s also a moment when a whole gang of people gets caught up in an all-out game of keepaway with the famous jacket – a scene which is underscored by the sounds of a rugby match.

This was completely charming – there are zany, Marx-brothers moments throughout (and some scholars suggest that A Night At The Opera may have been influenced by this film), there are moments of surreal humor, and there are moments of endearing romantic comedy with Michel and Beatrice (watch what they do when they’re stuck onstage).  It’s funny, it’s sweet, it’s got a happy ending, what more can you ask?