Ah, a comedy.  A comedy should be a good follow-up to Triumph Of The Will, yeah?

Well, yes, a comedy would have been a good follow-up to Triumph Of The Will. However, one of the key elements of a comedy – in fact, the very distinguishing characteristic of the genre – is that it is supposed to be funny.  And – It’s a Gift was not very funny.

I mean, funny things happen in it.  There’s an extended scene where W.C. Fields’ character is trying to take a nap on a porch, and gets interrupted by a milkman, noisy neighbors, a travelling salesman, a rickety porch swing, and – improbably – a coconut.  In another sequence, he tries to share a bathroom mirror with his oblivious teenage daughter, who is primping for a date while he shaves.  When her toilette gets too elaborate for him to have room, he hangs a hand mirror from a hook in the ceiling and tries to use that, circling it futilely as it spins. 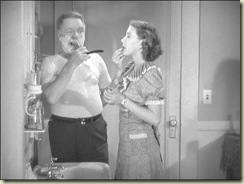 But these are just bits of schtick in a paper-thin plot which casts Fields as the henpecked husband to a thoroughly unpleasant matron.  He has an obnoxious son alongside his daughter, his clerk in the grocery store he owns is thoroughly stupid, his customers are all unpleasant.  Fields gets the notion to sell his grocery store and buy an orange grove in California, but absolutely no one likes the idea, and they all let him know it.

Most damning of all – Fields doesn’t really seem to say or do anything in this.     We’re probably supposed to see him as a sort of downtrodden everyman, but that’s not how it comes across – he just muddles through the film reacting to things.  His wife is depicted as his worst tormentor, which also didn’t make for a happy viewing – at least twice, she begins a lengthy speech complaining about how dissatisfied she is about something, and his reaction is to quietly sneak away as she yammers on.  Even if you set aside the icky gender politics, it’s also a lost opportunity for Fields to have said or done something that would give a sense of what the hell this guy is like.

Feh.  I’ll hold out for the next Marx Brothers picture.