I’ve known about Freaks for years, mostly by reputation. It’s had a strange sort of hip-arty cult-film cachet with one of the film’s most-quoted lines even finding its way into a Ramones song.  I nevertheless wasn’t all that prepared for my reaction – or for what I realized was in a way my own connection to the film.

Let’s discuss the film first.  Basically it’s a soap opera set in a circus’ side show; one of the little people, Hans, is smitten by the beautiful and cruel trapeze artist Cleopatra.  She herself has eyes on the strongman Hercules – but when she learns Hans is living off a sizable inheritance, she plays along with Hans’ ardor, secretly conspiring with Hercules to get herself married to Hans and then bilk him for all the money and run off with Hercules  If necessary…they may try to kill Hans.  While some of the other sideshow folk have their suspicions of Cleopatra, most take her at her word – leading to a moment at Hans and Cleo’s wedding banquet when the others all induce her to drink from a shared wine cup to seal their acceptance.  But as they hand her the cup, all chanting “one of us! One of us!”, she recoils and lashes out, calling them all freaks before running off. 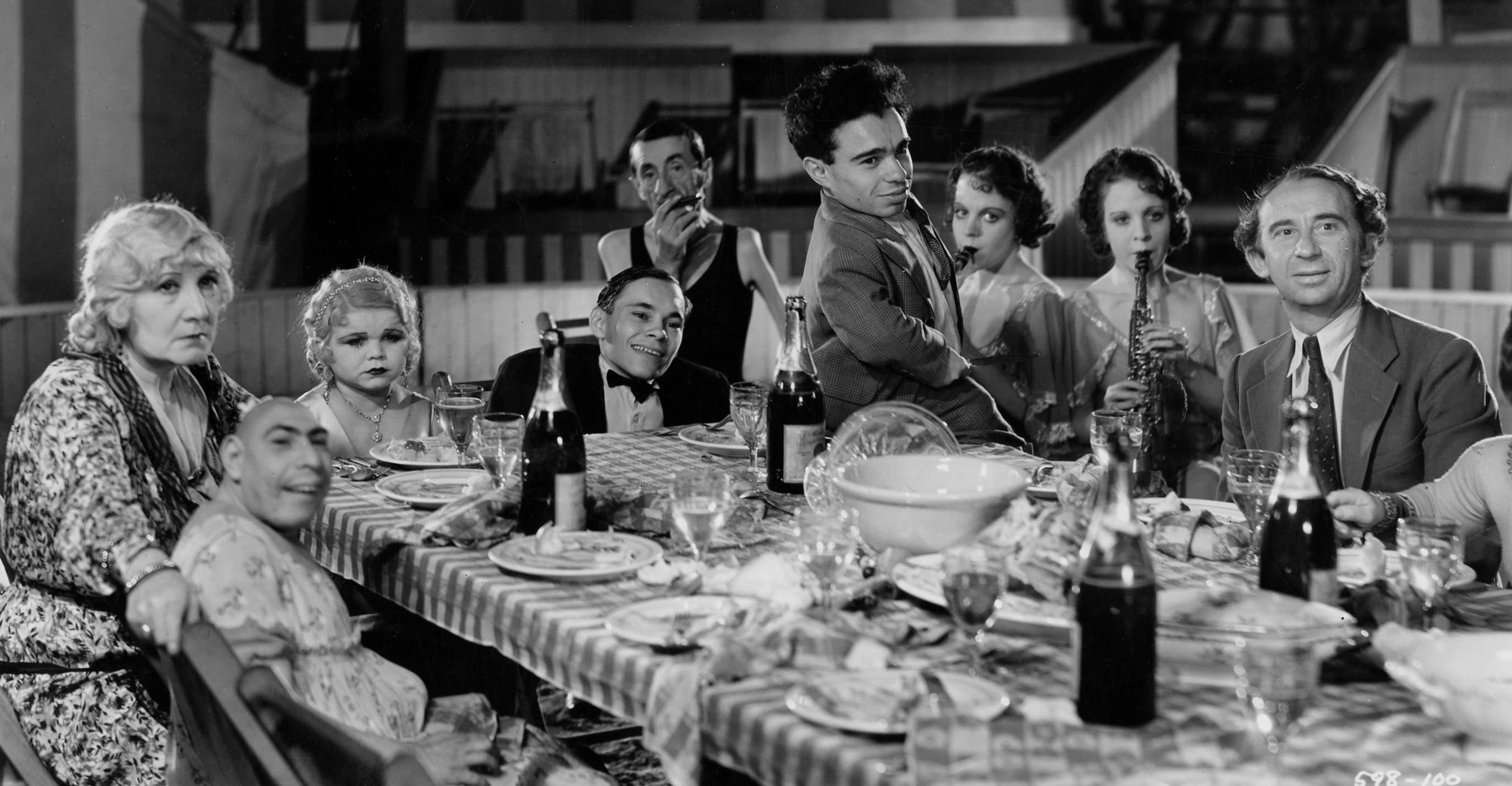 This understandably makes everyone suspicious.  And so as Cleopatra and Hercules start plotting their murder of Hans, the others in the sideshow hatch a plan of their own…

The film claims to be inspired by this “one-of-us” code of the “freaks”, and how their rejection from larger society has forced them into creating their own inclusive brotherhood.  And the film does treat many of the sideshow folk sympathetically.  There’s a brief cameo from the circus’ bearded lady – but instead of simply showing her and letting us ogle, it features her as a happy brand-new mother, seeing the whole circus assemble at her bedside after she’s just delivered a new baby (while the baby’s father, the “Human Skeleton”, passes cigars around to the roustabouts).  The subplot with the circus’ Siamese Twins (played by famed conjoined twins Daisy and Violet Hilton) is about their separate romances and eventual engagements, one to one of the clowns, the other to one of the circus’ producers.  Other sideshow cast are presented as people, going about their own lives.

And yet…there are a couple cases where it seems like the film is just a little bit exploitative, lingering a little too long on one or anothers’ particular quirks.  A scene with “Angeleno,” one of the little people, implies he is married to one of the circus’ two armless women; however, while the movie has taken pains to set up a scene to show “he’s married just like regular people”, her character is never named, and the film spends just a little too much time watching her eat a meal and drink a glass of wine using her feet.  Another scene sees a lengthy conversation between Johnny Eck, the legless man, and “Prince Randian”, who had no limbs at all.  Ostensibly they are discussing Hans’ upcoming marriage, but Johnny is the only one talking, while the camera is tightly focused on Prince Randian as he rolls a cigarette and lights it all using only his lips. It’s an impressive feat, to be sure – but surely Prince Randian can also talk with his lips, can’t he?  So why didn’t he in this scene?

Most likely it’s because Prince Randian, like several of the others involved, were actual sideshow performers and were not actors. He’s basically playing himself, as are the Hilton sisters, and the armless women.  There’s also an appearance by three microcephalics billed as the circus’ “pinheads”.  Filmmaker Tod Browning seemed driven to include as many different kinds of “freak” as he could find – which does lead me to wonder whether his motivation is 100% about defending their dignity, or whether he started to slip into the same kind of motivation that lead to their very exploitation in the first place.

….But I come to this perspective from a fairly unique place.

Through marriage, I am related to one of  P.T. Barnum’s better-known sideshow performers, Lavinia Warren – otherwise known as “Mrs. Tom Thumb.”  One of my twice-great grandfathers was widowed when my great-grandmother was a child, and he remarried to Lavinia’s niece; the family lived near the Massachusetts town where Lavinia retired with her second husband (she remarried another little person after “Tom Thumb” died).  My great-grandmother’s family thus did some looking after them in their later years, and we inherited a number of their things.  I’ve done my own research of Lavinia’s story over the years, and even wrote about her for Atlas Obscura a couple years back.  I even discovered a copy of her autobiography in New York’s library and devoured it in one sitting.  Lavinia wasn’t the most expert of writers, but she had a practical and funny perspective on her life, and a couple times she seemed to out-snooker P.T. Barnum himself. Getting to know Lavinia, and her own opinion on actually being a sideshow person, makes me wonder about how Prince Randian and Johnny Eck and the rest saw their own fates.

At least the members of the cast who had acting training went on to other things – Harry Earles, who played Hans, had already enjoyed previous roles in silent films, and was even credited with giving Browning the idea for Freaks in the first place.  Angelo Rossitto, who plays Angeleno, went on to a lengthy movie career spanning several decades; his last role was as the “Master” half of the “Master Blaster” team from Mad Max Beyond Thunderdome. But most of the rest of the cast went back into the sideshows from which they’d been plucked, many of them dying in poverty and obscurity.  So ultimately, for all of Browning’s protestations, all we were able to do – and I fear all we were meant to do – was gawk at them yet again.