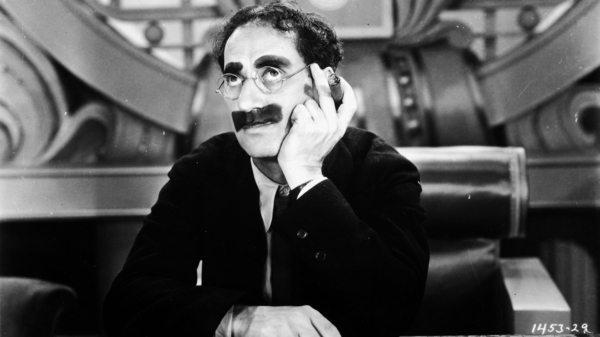 Duck Soup has been the first time in the Movie Crash Course that I’ve re-watched something. And I cannot begin to tell you how long I tried to think of an apt Groucho-esque pun to follow that statement; alas, the pun escapes me. But it’d be stupid to even try; Groucho is the master, forever and ever amen.

Something surprised me with this viewing – on paper, I shouldn’t have liked this film. Duck Soup has some of the faults I’ve frowned on in other films – a paper-thin plot that’s just an excuse for gags, some dialogue that hasn’t aged well, a character whose motivations and affections turn on a dime. But what I noticed wasn’t the faults themselves – what I noticed was that I wasn’t caring about them, because the gags offered by that paper-thin plot were so good and the dialogue was still so rapid-fire witty, and even if a couple of the jokes landed badly, the cast was already on to the next quip by the time you were blinking and thinking “….hang on.”

Briefly, for the three people who haven’t heard of this film: Groucho is Rufus T. Firefly, who’s been dubiously appointed to the presidency of the nation Freedonia.  He almost instantly begins wooing the wealthy widow Mrs. Teasdale (Margaret Dumont), who’s been loaning the nation money; but a Mr. Trentino, ambassador from the neighboring Sylvania, is doing the same in a bid to take over Freedonia.  Trentino sends in his two top spies (Chico and Harpo) to undermine Firefly.

It almost doesn’t matter what the plot is anyway; any Marx Brothers movie is really just an excuse to watch the Marx Brothers do stuff. The team is known for their wordplay, but on this viewing, it was the physical comedy that stuck out most for me. Duck Soup is home to the oft-copied “mirror sequence”, where a disguised Harpo is snooping in Firefly’s house late at night, and Groucho spots him in a doorway – so Harpo desperately tries to pretend that the doorway is actually a mirror, and he is Groucho’s reflection.  I’m almost positive you’ve seen it.  I don’t care, here it is again.

I was even more taken with the “triple-hat” scene, where Chico and Harpo are working undercover as peanut vendors outside the Freedonia parliament and collaborate to drive a nearby lemonade salesman foamingly nuts.  The timing and choreography of this scene is flawless.

There are scholars and historians who’ve argued that Duck Soup is a satire of fascism and totalitarianism; and it can come across that way, especially when you consider its 1930s release date.  But this was probably accidental; Groucho once quipped that all that Duck Soup is “about” is “four Jews trying to get a laugh”.  Still, when the brothers heard that Italian dictator Benito Mussolini took offense to the film and banned it in Italy, they were delighted.

Alex insisted on watching this with me, and told me about the time he showed this film to a college friend.  The friend watched silently through most of it, finally speaking up while watching a physical gag of Harpo’s:  “I’ve just realized….he isn’t human.  He’s a manifestation of chaos.”  Frankly, “a manifestation of chaos” is one of the best reviews of this film I know of.