For a while, the ads for the Broadway stage adaptation of 42nd Street billed it as “the musical for people who love musicals.”

….Yeah, that’s about right.  This hits all the tropes for stories about “life backstage” and “putting on a show” – the plucky newcomer who gets her big break, the aging diva, the overblown budget, the director who overworks everyone, and a happy ending where a star is born and the show is a rave and the box office coffers overflow.  I was amused, though, to see a few other familiar sights from my own backstage past – everyone else in the cast stealing catnaps while the director obsessively works on one tiny bit of one scene over and over, the gossip about who’s hooking up with who, the co-producer who’s given up on reining things in and is just sitting back and letting the staff run wild. 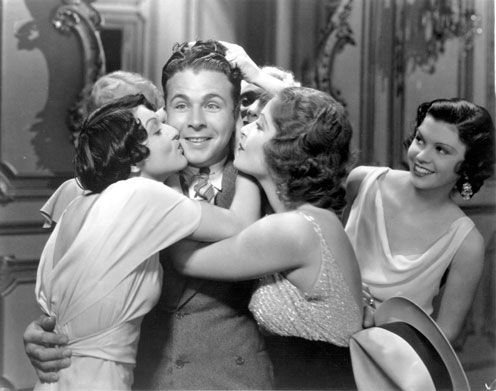 42nd Street is the behind-the-scenes story of the development of a musical called Pretty Lady, staring the famed Dorothy Brock (Bebe Daniels); however, the biggest reason it stars Dorothy is so that they can get the funding from her sugar-daddy producer Abner (Guy Kibbee).  Director Julian Marsh (Warren Baxter) is tapped to direct, but during his hiring interview the producers ask about a recent breakdown he’s rumored to have had, is he okay?….Marsh confesses that it was due to anxiety over money – he lost everything in the Stock Crash of 1929 – and he needs to work on a successful show so he can make his money back and retire.  So clearly, he argues, he needs Pretty Lady to be a success just as much as his superiors do, which guarantees that he’ll move heaven and earth to make it so.

This anxiety still informs Marsh’s behavior during the auditions and rehearsals for Pretty Lady, driving him to bark orders during the audition and throw tantrums at his stage manager and work the cast for hours. Brand-new chorus girl Peggy (Ruby Keeler) is an especial target due to her inexperience, and she faints in rehearsal one day. While she’s recovering by the stage door, she befriends actor Pat Denning (George Brent) who’s also lingering outside.  He listens to her vent a bit, then invites her to dinner to console her – and to take his mind off being recently dumped by Dorothy, who’d been secretly dating him under Abner’s nose.  Peggy’s skill grows over the course of rehearsals – as does her flirtation with Denning – leaving Dorothy feeling like Peggy’s trying to steal her thunder as the show’s opening night draws closer…

It’s a melodramatic plot. And to be frank, some of the plot threads are simply dropped midway through; Marsh’s health and money woes are rarely alluded to again, and most of the film only sees him shouting at the actors. Peggy seems to transfer her affections from Denning to another actor pretty easily.  But this isn’t the kind of show you watch for the plot anyway – it’s understood that what people have really come to see are the songs and dancing throughout, culminating in a set of all-out Busby-Berkley production numbers in the last 20 minutes of the film, as we watch the “opening night” of Pretty Lady.

Now, I’m not really a “musical theater” person, at least not like most High School Drama Club Alumni are. Yeah, I mainlined the soundtrack album of A Chorus Line and I cannot hear the song “All That Jazz” without breaking out Bob Fosse Jazz Hands and I know all the words to “Seasons Of Love” from Rent and some of the words to “Guns and Ships” from Hamilton, but…honestly, I prefer straight drama.  Big dance production numbers for their own sake usually see me shifting in my seat and wondering when we’re going to get back to the story.  But damned if the dance numbers in this weren’t impressive to look at, even though they’re all totally unrelated to each other or anything else in the film.  I was especially charmed by “Shuffle Off to Buffalo”, which Keeler and costar Dick Powell do on a stage-set version of a Pullman Car train; it was the most nakedly “stagey” part of the show-within-a-show, to the point I could imagine just how the set designer would have rigged it up.  Then that was immediately followed by “I’m Young And Healthy”, a full-on Berkley number with Powell cavorting with a bevy of chorus girls complete with overhead shots of the action and a tracking shot through the chorus girls’ legs.  Did it have anything to do with “Buffalo”? Nope.  Did it have anything to do with the title track, which followed it up?  Nope.  But did it look cool?  Okay, yeah. 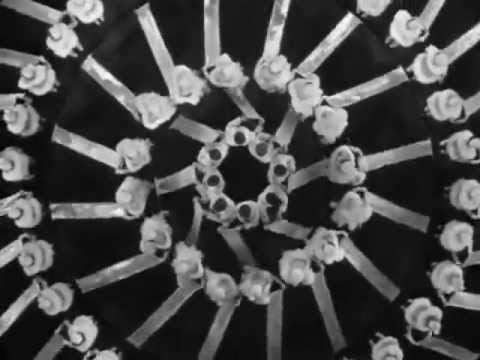 This may be a film for people who love musicals – but even this person who isn’t all that crazy about musicals was pleasantly surprised.